True Lies is a fun movie from beginning to end, one of those tongue-in-cheek, action-packed, secret agent romps that appeal to audiences around the world. Made on a budget of $115 million, it grossed almost $380 million throughout the globe and even picked up an Oscar nomination for Special Effects & Visual Effects. It became the first movie in history to be budgeted at a hundred million dollars, beating the previous record-holder, Cameron’s own Terminator 2: Judgment Day (1991), but would itself be beaten the following year by Waterworld (1995). A sequel to True Lies was in the works for some time and pencilled in for around 2002, but the September 11, 2001 attacks brought about its indefinite shelving. ‘In this day and age’, Cameron told an interviewer, ‘terrorism just isn’t funny anymore.’ 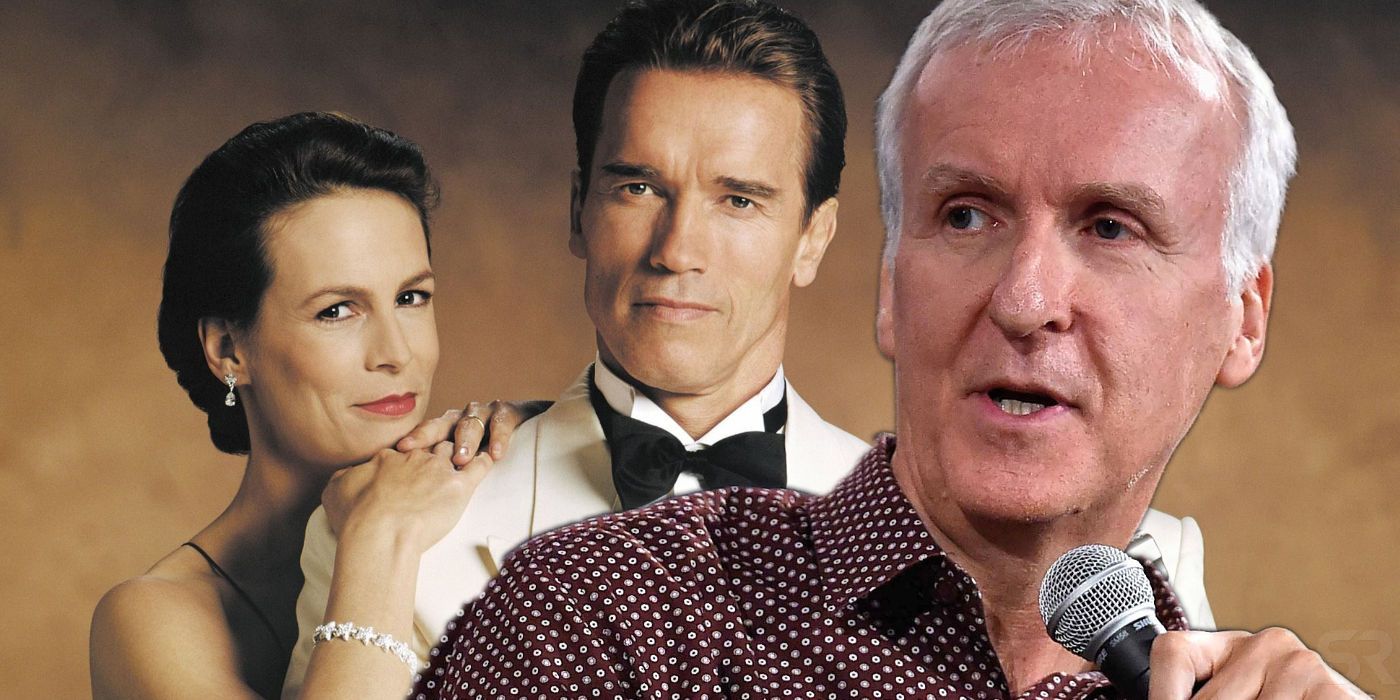 The picture’s success was probably no surprise (in hindsight) to fans of its terrific director James Cameron. After all, he has been at the helm of a bunch of extraordinary movies- The Terminator (1984), Aliens (1985), The Abyss (1989), Terminator 2: Judgment Day (1991), Titanic (1997) and Avatar (2009). The four principals in True Lies deliver very enjoyable performances that lift the film. I refer to Arnold Schwarzenegger as secret agent/computer salesman Harry Trasker; Jamie Lee Curtis as his wife Helen; Tom Arnold as his fellow agent and best friend Albert Gibson (Gib), and Bill Paxton who is a delight as the cowardly con-man Simon. Simon and Harry are mirror-images of each other – Simon is a salesman posing as a spy; Harry is a spy posing as a salesman.

One of the many funny moments in True Lies occurs when Harry tells his pal Gib that he thinks Helen is having an affair. Gib tells him about his own second wife taking everything when she left him, even the ice cube trays from the freezer! Tom Arnold is playing Gib and is referring to his own divorce from actress Roseanne Barr that was taking place at that time. It was reported that she took his ice cube trays when she left him as well. Arnold related the story to director Cameron on the set one day while saying: ‘What kind of sick bitch takes the ice cube trays out of the freezer?’ Cameron thought the line was hilarious and incorporated it into the film. It should be noted that 20th Century Fox did not want Arnold in the movie because of the unsavoury publicity surrounding his divorce, but Cameron insisted they use him, even threatening to take the picture elsewhere if they refused. Arnold, Cameron and Schwarzenegger have become firm friends since then.

Twelve year-old Eliza Dushku appears in this picture as Dana Trasker, daughter of Harry and Helen. In 2018, she revealed that the film’s thirty-six year-old stunt co-ordinator, Joel Kramer, had sexually molested her one evening while she was making True Lies. On the pretext of building her confidence he invited her to his room where she claimed he sexually molested her. She kept quiet about the incident because Kramer was responsible for setting up several risky stunts involving the girl and she was afraid that he may have chosen to sabotage one of them. In fact, she broke ribs during the Harrier jet stunt scenes and has since revealed her belief that the injuries were, in her opinion, probably not entirely accidental. There were those who disputed her accusations because of her history of alcohol and drug abuse that began when she was fourteen. Fans of Buffy the Vampire Slayer will recall her as Faith Lehane.

A couple of days after her 2018 accusations, other women came forward and accused Kramer of similar offences. Stunt woman Laura Albert worked under him on the 1999  movie Virus, when he invited her fifteen year-old sister and her girlfriend (who was sixteen at the time) to enjoy some go-carting: ‘Unbeknownst to me, my boss, Joel Kramer, had lured the girls to go swimming at the pool in his hotel.’ Albert claimed Kramer then exposed himself to her sister, who promptly left. ‘Joel had sex with the 16 year-old girl’, Laura said. ‘She was 16. He was 39.’ Laura informed the Wilmington police who politely informed her that the age of consent in North Carolina was, in fact, sixteen.

Another professional stunt woman (who preferred to remain anonymous), alleged Kramer exposed himself to her in his car before forcing her to fellate him. ‘If I were to report this to the stunt group, the police, or SAG, I would have no chance in a career as a stunt woman’, she said. Kramer not only denied her allegations but also referred to Eliza’s as ‘outlandish, manipulated lies’. Jamie Lee Curtis, on the other hand, wrote an essay about Eliza’s accusations, applauding her for stepping forward. The Worldwide Production Agency has since dropped Kramer as a client, convinced that such accusations would be harmful to the agency’s public image.

The original idea for the striptease scene was for Jamie Lee Curtis to be completely naked, but in the dark and in silhouette. It was her idea to shoot it in full light while she performed with her underwear on. The sequence drew some criticism for its perceived misogynistic content, but Cameron noted that most of this criticism came from men. Female reviewers generally found it to be empowering and even liberating for the Helen character. The bridge that was blown up as Helen is getting rescued was an 80-ft model of the Seven Mile Bridge in The Keys. Cameron suggested Jamie Lee do her own stunts in the rather scary sequence that saw her hoisted from the runaway car at the last minute. ‘Oh, yeah, and just where are you going to be while I’m dangling way up there in the air, Jim?’ she asked him. ‘Hanging out the door filming you with a hand-held camera’, he replied.

One of the Harrier jet stunts

A full scale model of a Harrier jet was built for all of Arnold’s close shots flying the plane. It was operated puppet-like from a crane on a nearby building which was later painted out with CGI. The Harrier spinning around alongside the building with stunt people clinging to it was dangerous work indeed. All involved were fitted with safety harnesses, of course, which were digitally removed from the film later. Some of the more dangerous scenes were shot with the actors in a studio.