Born Frances Ethel Gumm in Grand Rapids, Minnesota in 1922, Judy Garland was singing from the age of two. Her mother recognised her potential at once and carted her around the country, having her perform solo in nightclubs, cabarets, hotels and theatres. The family was in constant turmoil, however, due to Judy’s father’s closeted homosexuality. The Gumm family (she had two older sisters, Mary and Virginia) would regularly be forced out of towns because of his illicit affairs with men. From time to time they would be reduced to living out of their automobile, but all that changed when MGM boss LB Mayer signed young Frances to a movie contract in September 1935 and gave her the new name, Judy Garland. Over the years he routinely touched her inappropriately, usually under the guise of telling her she ‘sang from the heart’. When she complained about the assaults, he feigned shock. After all, he told the girl, he felt he was a father figure to her.

Meningitis claimed her real father in November that year. The studio, with the compliance of Judy’s mother, soon had the teenager on pills to combat her tiredness on the set and amphetamines to control her weight fluctuations. It was the start of a vicious cycle that would ultimately lead to Judy’s drug addiction and early death. It has been recently (and convincingly) claimed that producers in her early career would send the young girl to six different doctors for prescription drugs, without any one doctor knowing about the other five. Little wonder she became addicted. 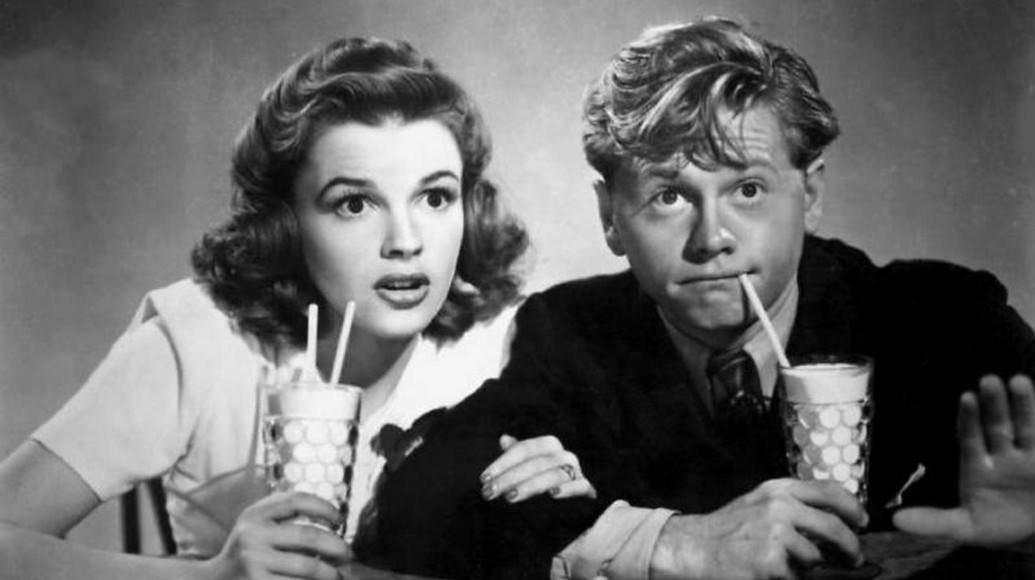 Judy and Mickey Rooney circa 1940

She discovered men at an early age. It was her long-time pal Mickey Rooney who told of her being regularly seduced at the age of fifteen by none other than the 38 year-old star Spencer Tracy! Mickey claimed Judy had told him of the seductions that lasted for three years and that everyone at the studio knew all about them. Tracy, said Mickey, was one of many Hollywood predators the public were blissfully unaware of.

Artie Shaw was heavily involved with her when he suddenly ran off with Lana Turner and married her. Judy was devastated. ‘I read someplace that Judy Garland, then seventeen, had a serious crush on Artie’, recalled Lana. ‘She had gone out with him days before I did and hoped he was getting serious. The morning after we eloped, she was eating breakfast in bed when she saw the headlines, and immediately burst into tears.’ MGM fixer Howard Strickling ordered one of the publicity department women, Betty Asher, to become Judy’s bosom buddy and to try to steer her away from Shaw. Not only did the 49 year-old Betty become Judy’s lover, she became Shaw’s as well and slept with MGM’s other fixer, Eddie Mannix, whenever the chance arose. On Strickling’s instructions she encouraged Judy’s drinking, the idea being it would be easier to manipulate a drunken Judy than a sober one.

Judy was not a lesbian but she was bisexual and preferred oral sex to intercourse. She preferred women in bed because, in her opinion, they were better at oral sex than men. Her last husband, Mickey Deans, said she liked to date gay men, hence her numerous outings with Van Johnson. When Judy finally learned that Betty was a spy for Strickling and Mannix, she fired her on the spot. Betty was genuinely heartbroken and would take her own life a few years later. Her brother, Bill Asher, was convinced his sister never got over losing Judy’s affections.

Judy then had a brief affair with song-writer Johnny Mercer until bandleader David Rose entered her life. The studio insisted she wait until he divorced his wife before publicly showing her feelings. In May, 1941, she became engaged to him, two months after his divorce from Martha Raye was finalised. They planned a big wedding but suddenly eloped to Las Vegas in July. Only the bride’s mother, Ethel, and her new stepfather were present. Judy fell pregnant in November 1942, but her husband and MGM joined forces to convince her to abort the child. A pregnant Judy, they agreed, was not good for her ‘good girl’ image. She would be haunted for the rest of her life by her ‘inhumane actions’. She and Rose separated in January 1943 anyway and divorced the following year.

Within weeks of her separation from Rose, Judy was heavily involved with Tyrone Power who was married to actress Annabella at that time. The affair only lasted until May ’43 when he went off to WW2. Some sources say he left Judy with child, just as he would with Lana Turner in ’46. If so, Judy must have aborted the baby before getting briefly entwined with producer Joseph L. Mankiewicz who introduced her to psychoanalysis. If nothing else, this prepared her to make her own decisions and not rely entirely on MGM and her mother to pull all the strings. She moved on from Mankiewicz in November ’43 and reluctantly began making Meet Me in St. Louis (1944) under the direction of Vincente Minnelli. 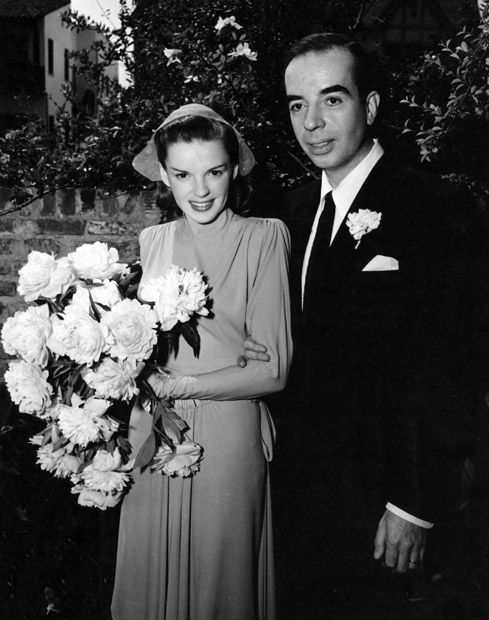 Minnelli knew how to make her look more beautiful on-screen and her image changed dramatically. By the end of filming in April 1944 the couple were deeply involved and living together. They married in June the following year, despite Judy having found time for a brief fling with the ever eager Orson Welles who happened to be married to screen goddess Rita Hayworth when he took Judy into his bed. Evidently, Rita had (quite rightly) accused him of cheating on her, so he petulantly (and very publicly) conducted an affair with Judy just to spite his wife! In March 1946, Vincente and Judy became parents when daughter Liza Minnelli was born by caesarean section. Judy’s post-natal depression and pill-popping caused her to make accusations against friends (and especially her husband) that undermined their marriage. Her 1947 affair with aspiring actor Yul Brynner hardly helped the situation. Neither did discovering her gay husband in bed with a male employee one day. Minnelli’s biographer, Emmanuel Levy, said Vincente was openly gay in New York but tempered his behaviour in California for appearance’s sake.

Through 1948 and 1949 Judy’s health deteriorated to the point where she attempted suicide (the first of many attempts) and checked into a rehabilitation centre for the first time. She was visited at the centre several times by her latest lover, Frank Sinatra, and seemed to show definite signs of improvement, but she saw little of her husband or daughter. Pills she was prescribed contained morphine and she also started to have alcohol issues. Set to play the lead in Annie Get Your Gun (1950), she repeatedly clashed with director Busby Berkeley and tried to have him fired from the picture. She was arriving late to the set and also undergoing electroshock therapy for her depression In May ’49 MGM removed her from the picture and brought in Betty Hutton.

In September 1950, at the age of just 28, Judy and MGM parted company after fifteen years. By the time her six-year marriage to Minnelli ended in March 1951, she was with Sidney Luft, her tour manager and producer; enjoying new-found fame on the stages of Broadway and London. The couple decided to marry when she became pregnant in February 1952 and they wed in June. By this time Judy was completely estranged from her domineering mother and probably envisioning a happier future minus the interference of both Ethel and MGM. But it was not to be. She gave birth to her second daughter, Lorna Luft, in November ’52, refusing permission for her mother to see the child. When Ethel suddenly died in January ’53, Judy suffered extreme guilt over not reconciling with her before it was too late. Even in death her mother was causing her daughter pain.

Shortly after her mother’s funeral Judy signed with Warner Brothers to make a new version of the 1937 film A Star is Born. Although still married to Luft, (they would not divorce until 1965), Judy celebrated her new lease on life by bedding her British leading man, James Mason, and rekindling her affair with Sinatra. Luft had a chronic gambling addiction that squandered millions of his wife’s money and instigated numerous divorce filings, yet the couple reconciled enough for Judy to give birth to their son, Joey, in March 1955.

Husband # 4 was Mark Herron (formerly Truman Herron) came along in November 1965, but his homosexuality put paid to the union within five months. He was deeply involved with actor Henry Brandon. Fans of the John Wayne classic The Searchers (1956) might recall Henry playing Chief Scar/Cicatris, the Comanche who kidnaps the Duke’s nieces. When Judy caught Herron in bed with Liza’s gay husband, singer Peter Allen (of ‘I Go To Rio’ fame), Mark chose to return to Brandon, his lover for decades.

Judy’s affair with young journalist Tom Green ended when she settled down in London and began dating disc jockey/nightclub manager Mickey Deans whom she married in March 1969. He would be her fifth and final husband. He was also her drug dealer. Just over three months after the wedding she breathed her last. During a concert in Chelsea, London she collapsed in her bathroom and died from an overdose of barbiturates, ‘an incautious self- over-dosage of Seconal’. She was 47. Mickey Rooney was to deliver the eulogy at her funeral, but Liza was concerned that he might not get through it without breaking down, so former lover James Mason delivered it instead.