There has always been speculation over Paulette Goddard’s date of birth, with estimates varying from 1909 to 1915. Actress Claire Trevor (born in March 1910), went to high school with her and always maintained Paulette was a year older than her. Most sources, however, give her birth date as June 3, 1910 so we shall stick with that. As a teenager, she accompanied her mother on steamship journeys where the two succeeded in bilking wealthy men on a regular basis. Right from the start Paulette knew how to use her looks to live in a style she felt was her due.

She made her New York stage debut in 1926 in Ziegfeld’s revue No Foolin’ and was signed as one of the original Goldwyn Girls, alongside Betty Grable, Virginia Bruce and Lucille Ball in 1930. She had already married three years earlier, when she was barely seventeen, to a lumber company executive. They separated in 1929 and divorced in 1932. In the settlement she was awarded $375,000 in cash, a huge sum for pre-1930. She gleefully went out and purchased a Duesenberg roadster for $18,000! 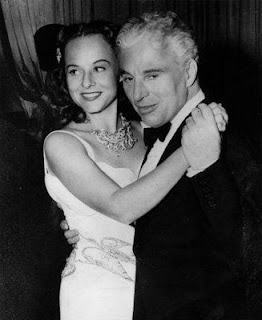 Once in Hollywood, she befriended the president of United Artists, Nicholas Schenck, and was soon introduced by him to the sexually rampant Charlie Chaplin. The little tramp boasted he could make love six times in succession and Paulette soon discovered it was no idle boast. He liked to refer to his penis as ‘the eighth wonder of the world’ and Paulette was happy to confirm it. ‘Charlie takes everything out of me’, she openly confided to friends.  Their affair carried on for several years until they secretly tied the knot in a ceremony off Canton, China in 1936. That same year Chaplin cast her opposite him in Modern Times and the picture made her a star. 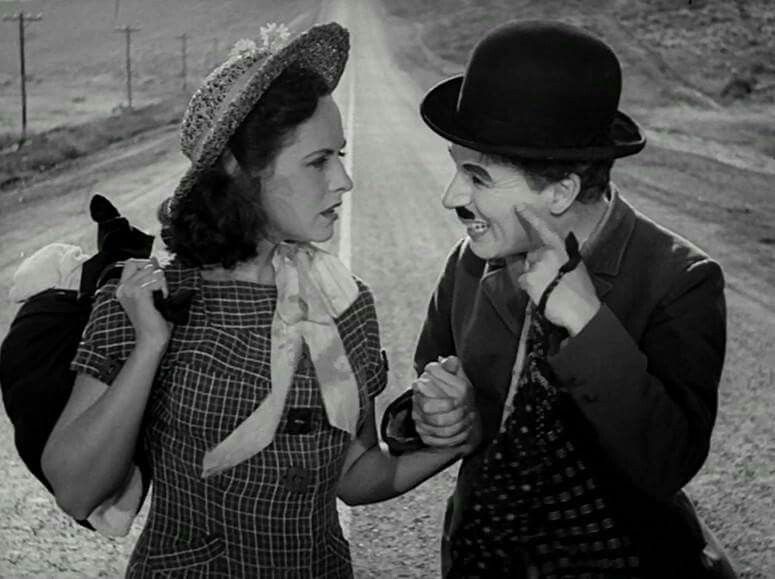 It has been suggested that their secret marriage may well have cost Paulette the role of Scarlett O’Hara in Gone with the Wind. Then again, the public must surely have been aware that she and Chaplin were ‘living in sin’ anyway, so it is difficult to imagine how announcing their marriage might have adversely affected publicity for the picture. Besides, it was also common knowledge that Vivien Leigh and Laurence Olivier were also in an illicit relationship, despite both being married to others, so the ‘living in sin’ argument simply does not appear to hold water, otherwise Vivien would have missed out on the Scarlett role as well. Another school of thought suggests that Charlie’s unpopular politics may have cost Paulette the plum role 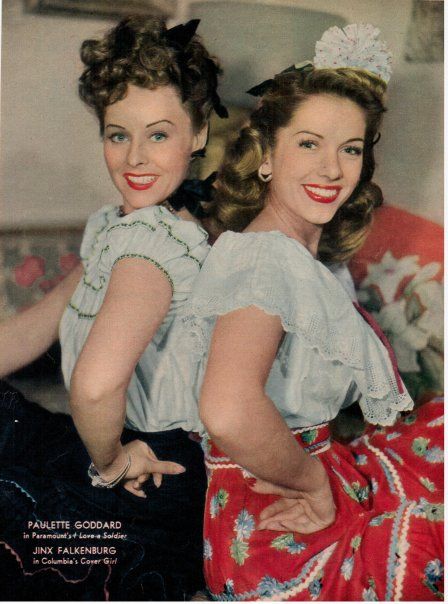 With her pal Jinx Falkenburg

In 1937, she met her best friend, model Jinx Falkenburg, at the Los Angeles Tennis Club. Jinx would repay her friendship by sleeping with Chaplin. Chances are, her husband’s infidelity probably did not bother Paulette all that much because she had been bedding George Gershwin on the sly for a couple of months anyway. Poor George succumbed to a brain tumour, in July, shortly after they stopped seeing each other. Paulette also met her future husband, actor Burgess Meredith, on the set of Second Chorus (1938). In 1940, she enjoyed affairs with Spencer Tracy (for a month or so) and David Niven for a few weeks. Bruce Cabot and playboy attorney Greg Bautzer ‘dated’ her as well. 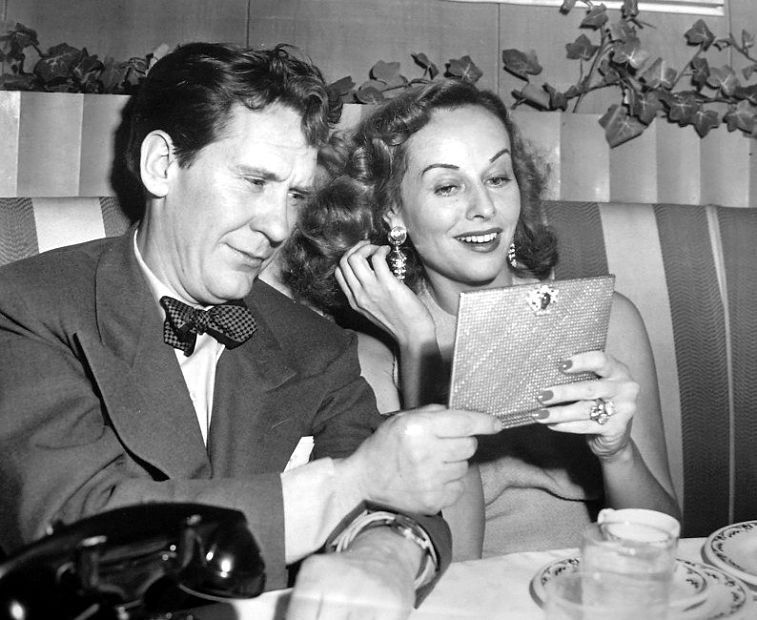 It was also in 1940 that the now legendary incident involving Paulette and director Anatole Litvak took place at Ciro’s Hollywood restaurant and night club. There are several accounts of what transpired, but the most likely appears to be this one: Paulette allegedly lost one of her ear-rings, so she and Litvak disappeared under the table to look for it. They were under the tablecloth for some considerable time and began making rather convincing moans and groans. Whether she was fellating her dinner partner, (as the tabloids delighted in assuming), or whether the couple were merely putting on a show for the aghast patrons, we will probably never know for sure. Whatever the real story, puritanical America was mortified by the possibilities. Outraged letters from families of American soldiers (the USA was not even at war yet), were sent to the Department of State in Washington D.C. The government took the matter seriously and even summoned witnesses, such as director Jean Negulesco, to hear their side of the story. Litvak had a nervous breakdown over the publicity! Thirty-five years later, director Hal Ashby drew inspiration from the story for his film Shampoo (1975), and had characters played by Warren Beatty and Julie Christie re-enact the incident.

Paulette’s romance with Meredith began hotting up in 1941, although she still found time to give her favours to presidential confidante Harry Hopkins for most of the year. In fact, most people who knew her mistakenly expected Harry to announce their betrothal after her divorce from Chaplin was finalised in Juarez. Perhaps, her three-day fling with future senator Chuck Percy disillusioned Harry enough to call off their plans. Or was it her on again-off again bouts with Gary Cooper (for almost 7 years) that convinced Harry that his lover was not one to take monogamy all that seriously! Maybe, it was her not so secret rendezvous with John Wayne in ’42. Or was it simply all of the above?

In the early days of America’s entry into the Second World War, the ever eager Paulette was seen being squired around town by the likes of Myron Selznick, radio personality Justin Mitchell, HG Wells and Artie Shaw. It was generally believed that Mexican artist Diego Rivera bedded her as well. Howard Hughes certainly did. ‘He never kisses on the lips’, she said, adding that she knew he serviced five or six women a day. It seems that Howard was even busier between the sheets than she was.

Paulette eventually married Meredith in 1944 in the home of David O. Selznick. The union was over inside five years, although it was on the rocks long before then. The new Mrs. Meredith had embarked upon a four-month affair with director/producer Alexander Korda in 1946, and had slept with John Huston in November 1948. By then she and Burgess were already living separately. In 1949, she shared a beach house with Peter Lawford and Evelyn Keyes, the general consensus around Hollywood being they were a ménage a trois. She was also seeing a lot of Clark Gable that year. The talk was they might soon announce their engagement. According to biographers Joe Morella and Edward Z. Epstein, however, she terminated their relationship after ‘the King’ refused to kiss her in front of newsmen and photographers when she left for Mexico to shoot a movie. ‘Well, that’s that!’ she snapped. ‘So long, Sugar!’ And the romance was over. 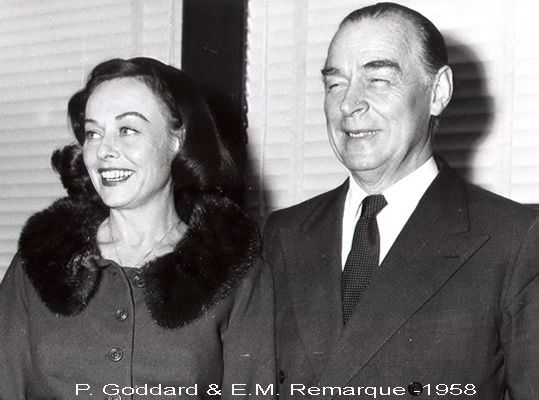 By 1950, the 40 year-old actress was heavily involved with TV producer/director Cy Howard, but dating commentator Gaylord Hauser on the side. By 1952, she was splitting her affections between the ever patient Howard and her latest lover, writer Erich Maria Remarque. Cy ultimately dropped out of the running and, in 1958, she became Madame Remarque, dividing her time between New York City and Switzerland. When Erich passed away in 1970, she finally called it a day (as far as love and romance were concerned). In 1978, the criminals who stole Chaplin’s corpse, shortly after his funeral, contacted the aging Paulette demanding ransom money! She refused them. When she died in 1990, this rather extraordinary woman left $20 million to the New York University. The Paulette Goddard Residence Hall is named in her honour.