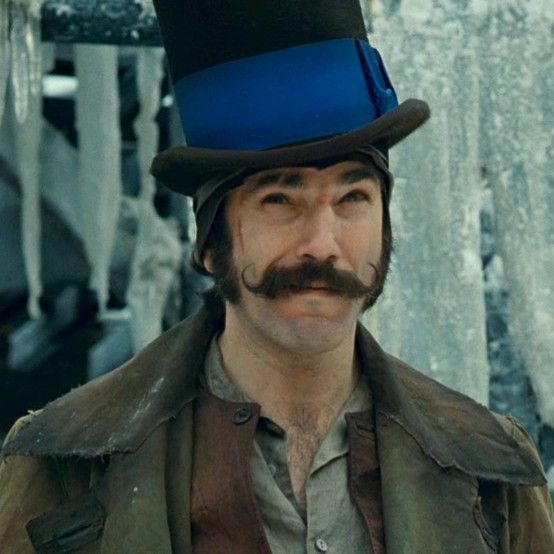 Daniel Day-Lewis as ‘Bill the Butcher’

Englishman Daniel Day-Lewis is a Method actor and an eccentric one at that. He was working as a cobbler in Florence, Italy when Harvey Weinstein, director Martin Scorsese and star Leonardo DiCaprio lured him into coming back to New York, so they could persuade him to accept the role of Bill ‘the Butcher’ Cutting in Gangs of New York (2002). It is true that, away from the screen, Daniel is a superb woodworker and more than capable of earning a living as a cobbler were it not for his acting career. His co-star in Gangs of New York, John C. Reilly recalled him getting very sick during shooting in Italy, and refusing to trade his character’s threadbare coat for a warmer one, simply because his Method training would not permit him to wear a coat that did not exist in the 19th century (his character’s century), so doctors forced him to take antibiotics instead. As often happens, the Bill the Butcher part was first offered to Tom Hanks. He loved it but had to say ‘no’ because he was committed to making the superb Road to Perdition (2002).

In order to get into the angry, self-righteous state of mind of his character, Daniel listened to recordings by Eminem over and over, but has not elaborated on how this helped turn him into Bill the Butcher. And once in character he rarely got out of character. Cast and crew recalled him speaking only in a New York accent throughout the day and sitting at lunch sharpening his knives! To simulate Bill the Butcher’s fake eye, he had his own eyeball covered in prosthetic glass, then taught himself to tap the fake eye with the tip of a knife without blinking. When DiCaprio accidentally broke his nose during a fight scene, Day-Lewis continued to film the scene despite the injury. His meticulous attention to detail saw him employ two circus performers to travel to his home in Wicklow, Ireland, to teach him how to throw thin, sharp daggers. He also worked in a butcher’s shop for several weeks, learning how to cut and gut carcasses. 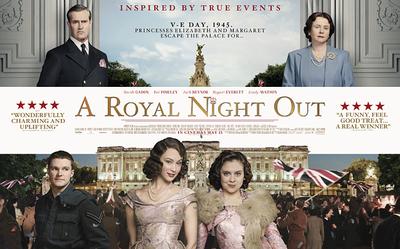 A Royal Night Out (2015) is a quaint, partially enjoyable film about the real life princesses Elizabeth and Margaret who receive permission from their parents, King George VI and Queen Elizabeth, to join the crowds in London who are celebrating Victory in Europe (VE Day) on May 8, 1945. The future Queen Elizabeth II was nineteen years old in May 1945, and wrote about her outing (which actually happened) in her diary: ‘Trafalgar Square, Piccadilly, Pall Mall, walked simply miles. Saw parents on balcony at 12.30am – ate, partied, bed 3am!’ The film takes one rather large liberty with the truth, however. Elizabeth’s sister, Margaret, was not with her. She was only fourteen years old at the time. Elizabeth’s ‘night of freedom from protocol’ is akin to Audrey Hepburn’s 24-hour adventure around Rome in William Wyler’s 1953 hit Roman Holiday.

Sarah Gadon as Princess Elizabeth in A Royal Night Out (2015)

Unfortunately, the writers got a little carried away concocting scenarios that were utterly implausible and asking us to accept them without question. Are we really expected to believe that two army officers personally charged by the King of England to chaperone his beloved daughters, one of whom is the future heir to the throne, would neglect their duty to engage in carnal pursuits? And would Princess Margaret really end up in a brothel after being slipped a ‘Mickey Finn’?  These obvious flaws aside, Canadian-born beauty Sarah Gadon (she bears a strong resemblance to Reese Witherspoon), is a delight as Elizabeth and her personality makes the movie watchable. Two years earlier she played the blonde Elizabeth Murray alongside Gugu Mbatha-Raw in Belle. Parts of the city of Hull were used for the Piccadilly scenes and Chatsworth House stood in for the interior of Buckingham Palace. 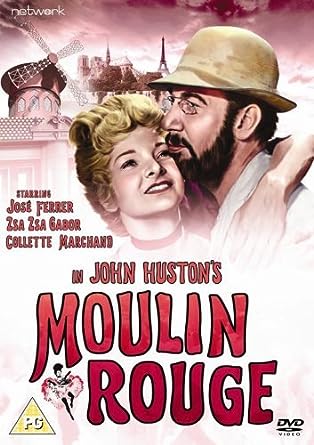 The 1952 feature Moulin Rouge focused on the life of dwarf painter Toulouse-Lautrec, played by Jose Ferrer. He had a most painful time throughout the shoot, adjusting to the little boots he had to attach to his knees in order to become Lautrec, his lower legs being strapped to his upper body. He suffered extreme pain, especially when it got cold, and the use of a cane became a necessity. The female lead, Zsa Zsa Gabor, played real life Jane Avril, and swanned about with a perpetual sneer on her lips because she could not abide the bevy of nubile young girls cast as the Can-Can dancers. Gabor could not act and her singing was dubbed by Muriel Smith, yet she paraded about as if she owned the set. The girls loathed her and mimicked her ‘Darlink! darlink!’ calls to director John Huston at every opportunity. Funnily enough, the real Avril was a dancer, not a singer. Zsa Zsa could not do either.

Cary Grant fell madly in love with Sophia Loren when they co-starred in The Pride and the Passion (1957), when he was 53 and she just 22. At the time he was married to Betsy Drake and Sophia was heavily involved with 45 year-old Italian producer Carlo Ponti, also a married man. Each man divorced his wife in the hope that Sophia would choose him. She chose Ponti. When Sophia visited Los Angeles while he was filming An Affair to Remember (1957) with Deborah Kerr, she was inundated with dozens of phone calls and hundreds of flowers from the besotted Cary, even though she had already ended their affair.

When it came time for the two stars to make Houseboat (1958), his ardour was undiminished. Sophia went to the director, Melville Shavelson, in tears, complaining that Cary was still chasing her, convinced she could not possibly love Ponti over him. During filming, Carlo obtained a Mexican divorce from his wife and married Sophia by proxy. A heartbroken Cary wanted to pull out of the project but couldn’t. Some were quick to say it was poetic justice. The original screenplay for Houseboat had been written by, of all people, Cary’s wife Betsy Drake, and she was initially to star in it opposite her husband. His obsession with Sophia soon put paid to that idea and the script was re-written by two other writers to accommodate the Loren character. Betsy could scarcely recognize her original story when they had finished with it. Her husband had alienated and divorced her, yet wound up alone.