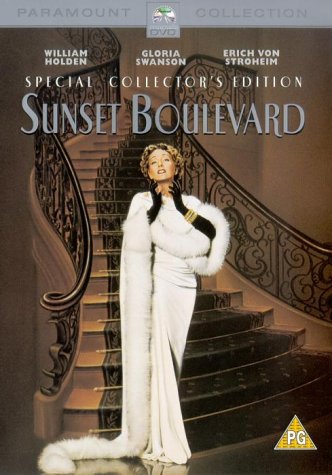 The name Norma Desmond, Gloria Swanson’s character in Sunset Boulevard (1950), was chosen from a combination of silent-film star Norma Talmadge and silent movie director William Desmond Taylor. The latter’s still-unsolved murder is one of the great scandals of Hollywood history and contributed to the eventual introduction of the Hays Code aimed at controlling conduct in the industry. On the morning of February 1, 1922, Taylor was shot to death in his Hollywood bungalow. His killer has never been officially identified but the ensuing publicity resulted in the eventual creation of self-censorship and the introduction of some kind of ‘moral code’.

Everyone was surprised when Judy Holliday won the Best Actress Oscar for Born Yesterday that year, triumphing over the joint favourites, Bette Davis for All about Eve and Swanson for her portrayal of Norma Desmond. It is generally agreed that the two titans cancelled each other out in the voting, leaving the path clear for Judy. Legendary director Cecil B. DeMille had agreed to play himself in a single scene in Sunset Boulevard, demanding for his cameo $10,000 plus a brand new Cadillac. When Wilder later came back to him for a close-up, the ever-accommodating DeMille hit him for another $10,000! He appears in the picture on the studio set of Samson and Delilah (1949), which he was shooting at the time. Billy wanted Hedy Lamarr, the star of that picture, for a cameo, but DeMille insisted she be paid $25,000 for it and the idea was still-born.

The Desmond mansion used in the film

The ‘Desmond mansion’ was actually located on Sunset Boulevard, on the corner of Crenshaw and Irving Blvd, and was rented to Paramount by its then owner, the former wife of millionaire John Paul Getty. The agreed fee for renting was the construction of the swimming pool needed for the movie, but it was not equipped with means of circulating the water and was, therefore, quite useless after filming ended. It was used again (in its empty condition) in the 1955 film Rebel without a Cause. Two years later the entire building was demolished and a large office complex for Getty Oil erected on the site. So much for preserving history. 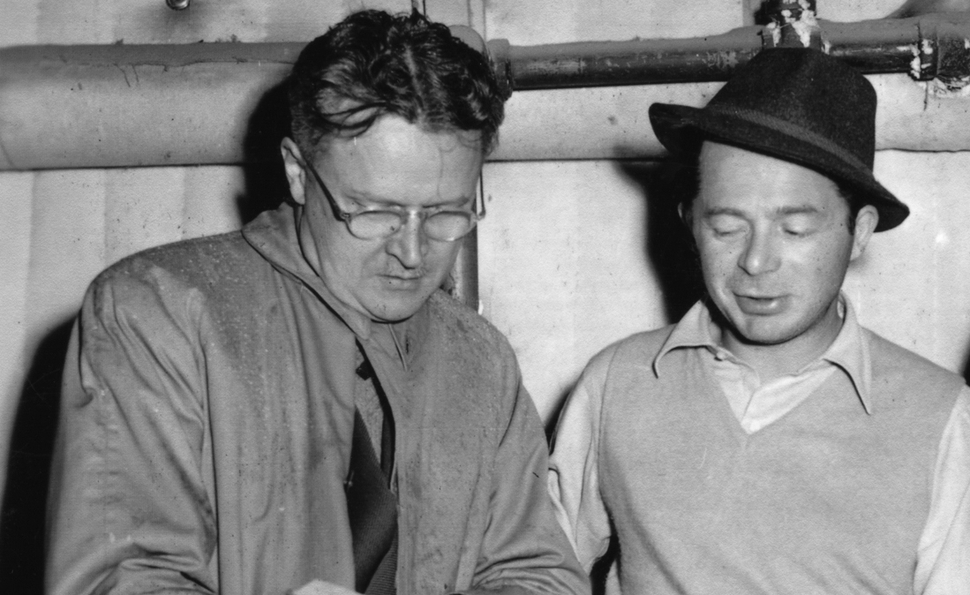 A number of noses were seriously put out of joint by Wilder’s movie. Silent star Mary Pickford, for instance, was pitched the story by Billy and his co-writer Charles Brackett, in the forlorn hope that she might condescend to play Norma Desmond. The two men quickly gave up on the idea when they saw she was clearly disgusted by both the story and the character they hoped she would portray. Silent star Mae Murray also found the film offensive, as did Norma Shearer who refused to come out of retirement to play the lead. Daryl F. Zanuck, Olivia de Havilland, Tyrone Power and Sam Goldwyn all refused to permit their names to be mentioned in the screenplay and the entire enterprise infuriated Louis B. Mayer. Swanson, on the other hand, readily accepted the role and was quite superb in it. It is worth noting at this point that Gloria, in real life, was nothing like the demanding, irascible Norma she portrayed in Sunset Boulevard. Fans who met her in later years were pleasantly surprised to find her possessed of a serene and easy-going personality. 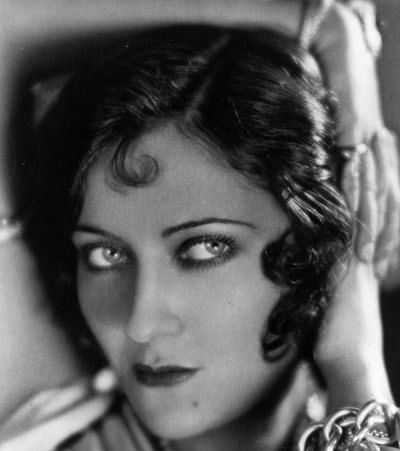 Gloria Swanson at the peak of her beauty

Surprisingly, the reclusive Greta Garbo granted Wilder and Brackett permission to use her name, though when she saw the film itself she regretted having done so, feeling they had used her name in a past-tense context, which offended her. Indeed, Wilder had even asked her to come out of retirement to play Norma, but she had quickly declined. Another silent star, Pola Negri, was also seriously considered for the role, but Wilder soon discovered that the thick Polish accent that had destroyed her career decades earlier was still in evidence and her name was removed from his list of contenders. Mae West rejected the role because she felt she was too young to play a silent movie star. In fact, she was 57 and Swanson was 50 in 1949 when filming commenced. 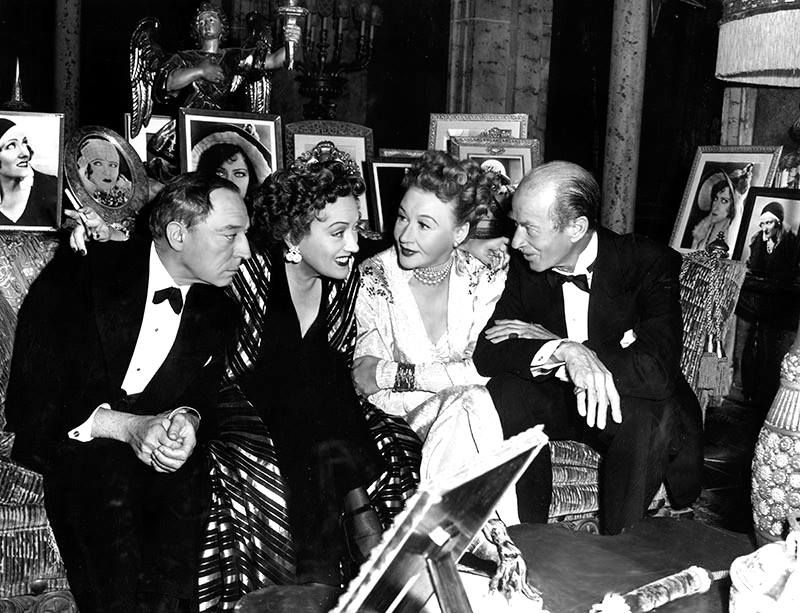 The scene in which Norma is playing bridge with some of her pals from the silent-movie era, features three ‘old-timers’, the immortal Buster Keaton, Anna Q. Nilsson and H.B. Warner. Swanson had approached her old friend, former leading man William Haines, to be one of the group but he had graciously declined. Billy’s career had been terminated decades earlier because of his homosexuality and he did not want to risk bringing all that old news into the limelight again. Besides, he was enjoying life as a highly successful interior decorator and did not need the money. Wilder grabbed Keaton instead.

In his book On Sunset Boulevard: The Life and Times of Billy Wilder, writer Ed Sikov related a story about Wilder’s explanation of the true meaning of the strange dead chimp scene near the start of the picture. During the mid-90s, Billy and former First Lady Nancy Reagan were at a party for Andrew Lloyd Webber’s musical based on Sunset Boulevard, when an old woman approached them and asked Billy what the chimp scene meant. Wilder enjoyed being outrageous and probably intended to shock Nancy as much as inform the woman of the true meaning of the scene, when he replied, ‘Don’t you understand? Before Joe Gillis came along, Norma Desmond was fucking the monkey.’

The drugstore where Joe Gillis meets up with his old movie industry buddies is Schwab’s Pharmacy. At the time it was a real pharmacy/soda fountain at the intersection of Sunset and Crescent Heights Boulevards in West Hollywood. It was a popular hangout for numerous actors, directors, writers and producers. Contrary to legend, however, it was not where young Lana Turner was discovered by a talent scout. That happened in a drugstore across from Hollywood High School, about three miles to the east. Schwab’s, incidentally, was torn down in 1988 and a movie theatre and shopping centre built on the site.

Thirty-one year old William Holden only got the part of Joe Gillis at the last minute. Montgomery Clift had signed to play it but broke his contract just two weeks prior to the start of shooting. The 29 year-old Clift was involved with Libby Holman who was 45, and they both feared the newspapers might pry into their relationship once he began playing a gigolo like Joe Gillis. Fred MacMurray did not wish to play a gigolo either; MGM refused to loan out Gene Kelly and Wilder considered Marlon Brando to be too unknown as a movie actor at the time to carry his film. In the end he reluctantly settled for Holden. It was the start of a lengthy association that proved fruitful for both men. As for the movie itself, Sunset Boulevard is generally considered by both critics and the public to be a classic depiction of ‘Old Hollywood’ and its shortcomings. A wonderful, wonderful picture.