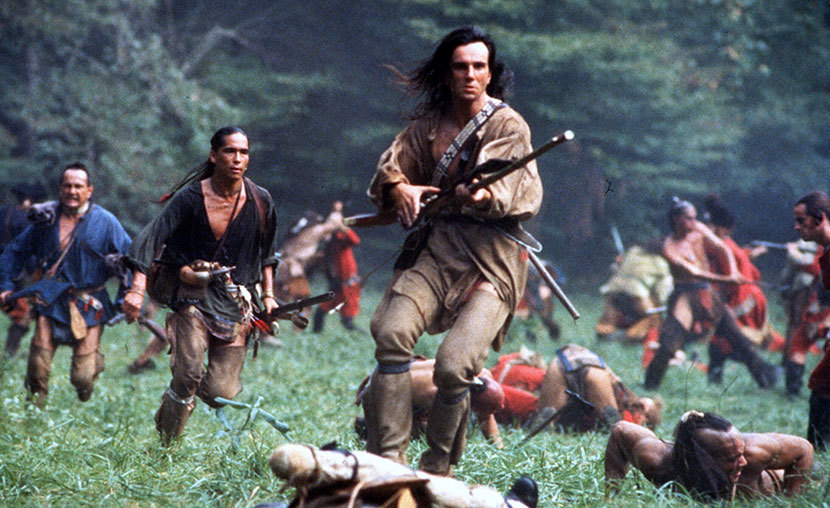 An action still from The Last of the Mohicans (1992)

LAST OF THE MOHICANS, THE (1992) French & Indian War (1754-63) – A love story set during a historically violent period of American frontier history.

Daniel Day-Lewis and Madeleine Stowe play the lovers around whom the violent and treacherous events of 1757 frontier America unfold. Of course, in real life the chances of a well-bred English aristocratic lady falling in love with a backwoodsman (and an American to boot), are about as remote as that same lady threatening sedition to her father, the British commanding officer, later in the film. Ah, Hollywood and reality are distant relatives at best. That aside, The Last of the Mohicans is a beautifully photographed film with an exceptional score that fits the mood and the era perfectly. The battle sequences are also entertainingly choreographed and exciting cinema. Loosely classed as a western (because of the presence of Native-Americans, I guess), this movie struck a chord with audiences and was a great box-office success. 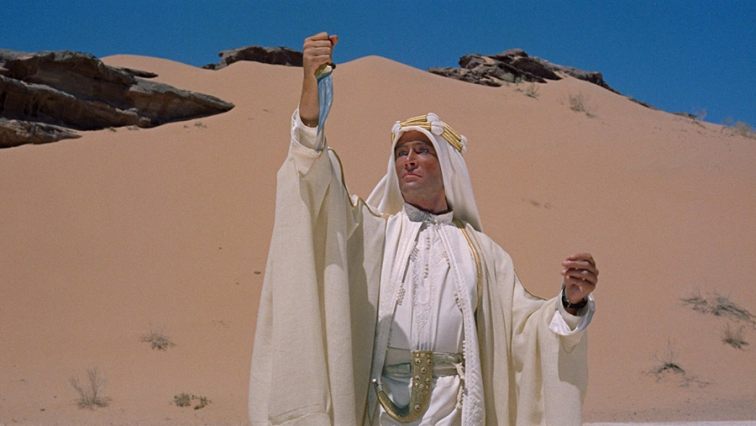 LAWRENCE OF ARABIA (1962) World War One – The extraordinary story of a lowly British soldier who personally changed the course of the First World War in the Middle East.

T.E. Lawrence is brilliantly portrayed by Peter O’Toole who really deserved a Best Actor Academy Award for his efforts. Gregory Peck won that year for To Kill a Mocking Bird, a nice enough performance, but without the range exhibited by O’Toole. Omar Sharif’s emergence out of a heat haze is truly one of the most memorable big screen introductions in cinema history. From beginning to end this movie as a visual delight. The magnificent desert vistas are accompanied by Maurice Jarre’s superb score and the combination places Lawrence of Arabia in a class all its own. Despite its length (216 minutes), and the complete lack of female characters, it has a certain quality that is timeless. One of the greatest cinema creations of all time; possibly the greatest.

LONGEST DAY, THE (1962) World War Two – An all-star cast representation of the June 6, 1944, D-Day landings at Normandy and inland France.

Darryl F. Zanuck and 20th Century Fox opted to make The Longest Day in black and white for three reasons. First, it allowed for the incorporation of actual war footage throughout. Second, black and white helped make a lot of the older actors appear considerably younger on-screen. Third, the budget of $10 million (compared to Fox’s $40 million for Cleopatra), was already scraping the bottom of the funds barrel. Colour was probably not an option anyway. The Longest Day is one of those big productions that, after a while, become a ‘spot the star’ exercise, a situation I have always felt distracts rather than enhances. However, the film does have some strong moments. Robert Mitchum and Jeffrey Hunter are good in the Omaha Beach segment and so is Richard Todd as paratrooper Major Howard, but several actors are far too old for the characters they play, a weakness that probably annoys veterans of the conflict to this day. Interestingly, Dwight Eisenhower walked out after watching only a few minutes. He was annoyed at the numerous historical inaccuracies he identified right from the outset. The Longest Day has several issues that keep it from being a great movie, but is still worth watching. 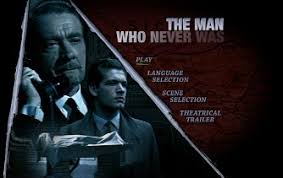 MAN WHO NEVER WAS, THE (1956) World War Two – The true story of ‘Operation Mincemeat’, an ingenious British Intelligence deception aimed at convincing German Intelligence that an Allied attack was about to take place in Greece and not Sicily.

Nobody makes semi-documentary World War Two movies like the British. Clifton Webb was an actor that I always enjoyed watching and his portrayal of Lt. Commander Ewen Montagu is a succinct and sensitive one. The equally under-rated Stephen Boyd is also terrific as the Irish-born Nazi agent sent to England to check on the authenticity of certain documents. And speaking of ratings, why do critics rave on about Gloria Graham’s lousy performances? She is the only sour note in this otherwise first class film. Fortunately, she does not have a lot of screen time. The film picked up a BAFTA for Best British Screenplay but was completely overlooked in the Academy Awards nominations.

MASTER AND COMMANDER: The Far Side of the World (2003) Napoleonic Wars – In 1805, a British frigate is ordered to chase and destroy a French privateer.

The book on which this film is based is set during the War of 1812, with the enemy of the British captain (Russell Crowe) being an American privateer. It was decided that the box-office returns would be harmed if the ‘bad guy’ was an American, so the time was put back seven years to 1805 in order to make the French the adversaries. Crowe was hot off his Oscar-winning turn in Gladiator (2000) and could have his pick of roles. He chose this demanding film as it was anticipated there would be more than one feature made. Unfortunately, it was not a box-office success and, consequently, no sequels were filmed. A replica of Captain James Cook’s ship HMS Endeavour was circumnavigating the world when filming began, so it doubled for Crowe’s vessel as it sailed around South America’s Cape of Storms.

MEMPHIS BELLE (1990) World War Two – An American B-17 crew prepare for their 25th bombing mission over Germany, the prize being a trip back home to the USA.

I have a soft spot for this movie because I have actually sat in the pilot’s seat of the ‘Memphis Belle’ mock-up used in the movie. It was at Warner World in Queensland, Australia and I was plucked from the tourist group, given a pilot’s cap, a flying jacket and a couple of lines of dialogue to speak, before being shoved into the aircraft. It could have been worse. The dude standing next to me was chosen as Superman and had to wear tights! Thank you, God. The movie itself is more factual than most USAAF films about WW2, in that the crew members are all played by very young actors, roughly the same age as the real crewmen they portrayed. It was a young man’s conflict after all. One gets an inkling of how terrifying it was for these young boys to fly missions over Nazi-occupied Europe during the war