At the time they made Fort Apache (1948) together, John Agar and Shirley Temple were husband and wife in real life and, Shirley was pregnant with their first child. Director John Ford took an instant dislike to Shirley, frequently deriding her acting ability and lack of education. He treated her husband even worse, riding him mercilessly and calling him ‘Mr. Temple’ in front of the cast and crew. It was all part of Ford’s methodology, to make everyone fearful of him and obedient. On one particularly bad day, Agar stormed off the set, but John Wayne took him aside and convinced him to return. The young actor was forever grateful to him. ‘I would go to hell and back for Duke’, he said many times afterwards. A couple of years later, Shirley and Agar would go through a messy divorce when his alcoholism, spousal abuse and infidelity were made public. 100 Rifles (1969) is considered to be the first mainstream American film to show a mixed-race love scene – African-American Jim Brown and white American Raquel Welch. Raquel and Burt Reynolds fell out during filming and remained enemies until the producers of Cannery Row (1982) accused Raquel of being unprofessional and fired her from the picture. She took her accusers to court and Reynolds testified on her behalf, stating, ‘Although Raquel and I don’t like each other, she was always on time, well-prepared and thoroughly professional.’ She won a $10.8 million settlement. David O. Selznick produced the immortal Gone with the Wind (1939), yet his career as a producer ended ignominiously with his final three pictures all being monumental flops. In 1947, Selznick International Pictures churned out The Paradine Case, directed by Alfred Hitchcock and starring Gregory Peck and Ann Todd. It ‘bombed’. A year later the Selznick Studio spent a fortune on Portrait of Jennie, starring Selznick’s wife Jennifer Jones and Joseph Cotten. The production actually cost more than GWTW, yet was only half its length and it bombed also. Two years later it was re-released under a new title, Tidal Wave, – and it flopped again! Forced to wind up his production company, Selznick made just one more film. It was a decade later and the picture was A Farewell to Arms with Rock Hudson and Jennifer Jones (again). It crashed and burned and Selznick along with it. 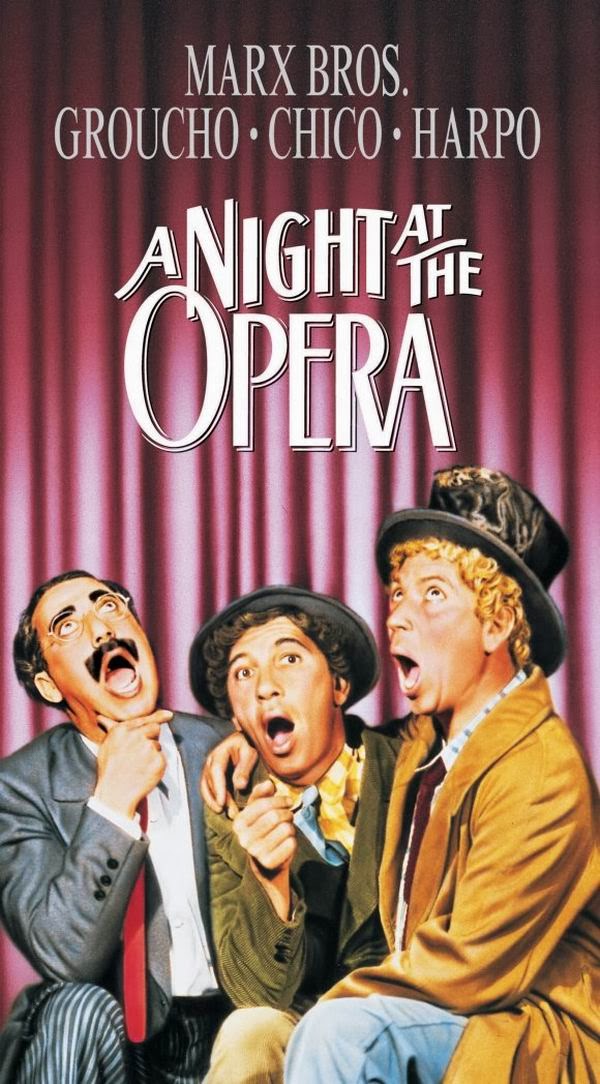 Director Sam Wood gave up in exasperation after trying unsuccessfully to get Groucho Marx to deliver a line of dialogue the way Wood wanted him to in A Night at the Opera (1935). Eventually, he threw his hands in the air and exclaimed, ‘I guess you just can’t make an actor out of clay!’ Groucho instantly retorted: ‘Nor a director out of Wood.’ Sam imposed fines for those who turned up late on the set, but had to scrub the idea after he fined Groucho $50 for being late one day, only to learn that Chico and Harpo had nailed their older brother’s garage door shut!

The ingenious solutions to problems that movie-makers come up with from time to time are often rather simple. In The Man Who Knew Too Much (1956), Hitchcock required a scene in which actor Daniel Gelin, who was pretending to be a dark-skinned Moroccan, had to be exposed as a phony. Jimmy Stewart’s character was supposed to run his fingers across Gelin’s face and the man’s dark make-up was to come off on his fingertips, but the scene would not work because the make-up artists could not produce make-up that would come off easily. In the end Gelin himself came up with a solution. Why not paint Jimmy’s fingers with a light-coloured powder that would leave pale streaks on Gelin’s face. They tried it and it worked.

Jane Fonda had just completed shooting Klute (1971) with Donald Sutherland, and was returning from delivering a Canadian college speech against the Vietnam War, when she was seized by police at Cleveland airport. Her luggage was searched and a large bag containing plastic envelopes was seized. She tried to explain that the envelopes, marked ‘B’, ‘L’ & ‘D’, contained the vitamins she intended to take at breakfast, lunch and dinner. Nevertheless, she was arrested for ‘drug smuggling’, ‘mug-shotted’, hand-cuffed and locked in Cleveland Jail. Her address book was also confiscated and photo-copied. The police were acting under orders from the Nixon White House. After every pill had been tested (at tax-payers’ expense) and each one found to be vitamins, not drugs, charges were quietly dismissed and she was released. Claire Trevor singing for a drink in Key Largo (1948)

Claire Trevor’s rendition of the song she was required to sing in Key Largo (1948), in order to get a drink of booze, is still riveting today. Most cinema fans, however, may not be aware that her nervousness was more real than acting. Director John Huston had sprung it on her that she would be singing her song that very day. Poor Claire was not a trained vocalist and had not even rehearsed the song. She was also intimidated by all the A-list actors seated around her. Uncomfortable and hesitant, she nervously wobbled her way through the scene, which was precisely what Huston had been hoping for. Incidentally, Claire’s character, Gaye Dawn, was based on real-life moll Gay Orlova, the mistress of gangster Charles ‘Lucky’ Luciano.

BMC, the makers of Minis, refused to donate any cars to be used in the making of The Italian Job (1969). The Fiat Motor Company executives, on the other hand, were aware of the advertising potential and offered an unlimited supply of Fiat 500s, plus top-of-the-line Lamborghinis and Ferraris, together with $50,000, if the producers would use the Italian cars instead of the Minis. However, the producers saw the Minis as quintessentially British, representing Britain versus the rest of Europe, so they stuck with the Minis and turned down Fiat’s generous offer. The ‘great idea’ that Michael Caine’s character has at the end of the picture, as the gang sits in the van full of gold as it teeters on the edge of a cliff, was revealed by the actor in an interview in 2003. ‘You turn the engine on’, he said. ‘You all sit exactly where you are, until all the petrol has run out, which changes the equilibrium. We all jump out of the bus and the gold goes over the cliff. At the bottom are the Italian Mafia, waiting for the gold.’ It was an interesting idea that never saw the light of day.