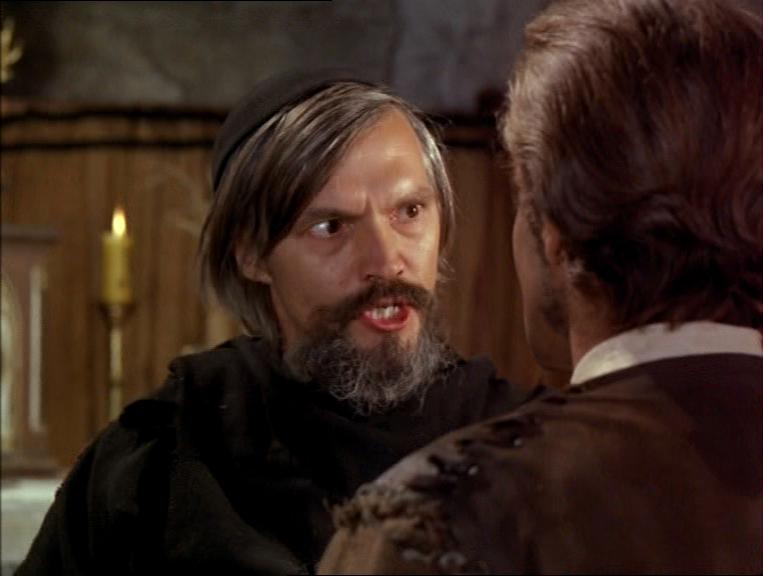 Per Oscarsson as the priest in The Last Valley

I have never fully comprehended why The Last Valley (1971) bombed at the box office and suffered at the hands of the critics. Perhaps, its negative approach to religion (both Catholic and Protestant) and its pointed abhorrence of every aspect of war annoyed those who tend to find pluses in both. Maybe, the Church exercised its considerable clout and influenced the critics’ approach to it. Whatever the reason, I believe The Last Valley has been unjustly pilloried. The screenplay is first class, Michael Caine gives arguably the best performance of his life (who cares if his German accent is a bit off), Per Oscarsson as the fanatical priest is one of the most sinister ‘nasties’ in movie history, Nigel Davenport and Omar Sharif give strong performances; and John Barry’s score is simply superb, despite being completely overlooked by the academy. The Last Valley gives us a chilling insight into the precarious lives of 17th century European peasants during the Thirty Years War. I love movies that create for us a visual vignette of an era in history that, previously, we could only imagine from documents and the written word. 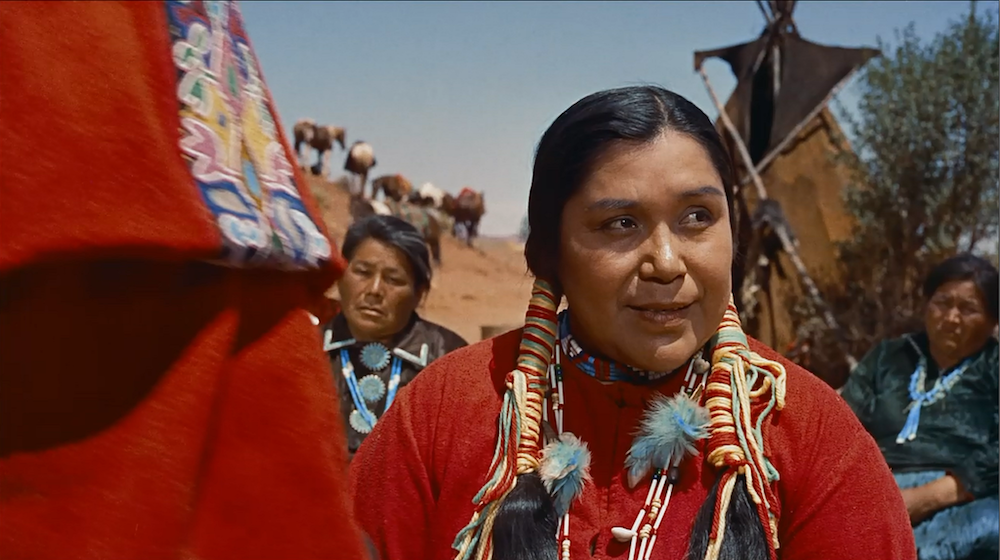 Beulah Archuletta as Look in The Searchers (1956)

One day, in between shots on the western The Searchers (1956), John Wayne came upon one of the supporting players, Amerindian actress Beulah Archuletta, weeping inside a tipi. She plays the squaw named Look whom Martin Pawley (Jeffrey Hunter) inadvertently marries in the picture. She told Wayne that she was crying because she would be missing her son’s wedding as her scenes were to be shot at that time. The Duke convinced John Ford to shoot other scenes for a few days and then flew a grateful Beulah to California to attend the wedding; a typically open-hearted gesture from the often maligned cowboy star. 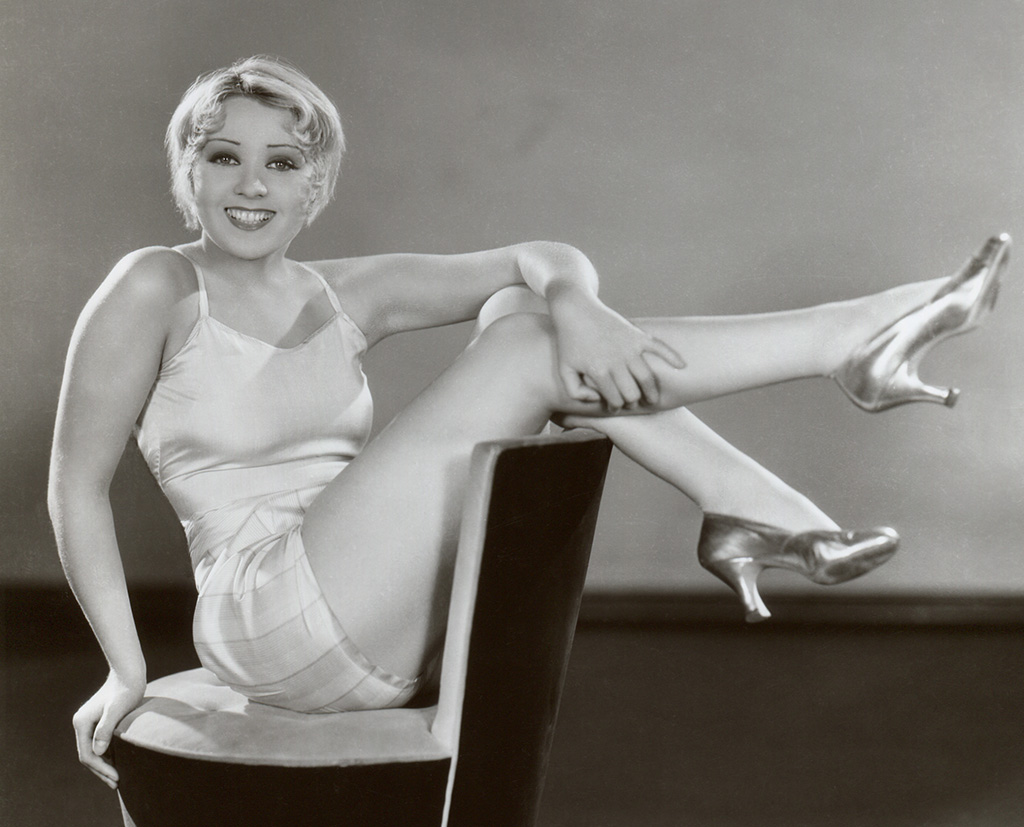 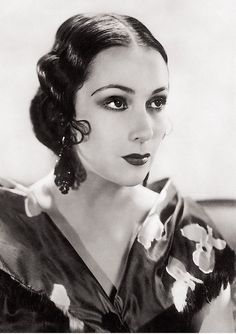 Costume designer Orry-Kelly’s recently published autobiography contains observations on several of the stars he knew. Joan Blondell, he said, ‘looked better in the altogether’. The screen’s great beauties, he said, were mostly unconcerned about baring all in his presence because he was an openly gay man. He described Olivia de Havilland as ‘kind, considerate, sincere and loyal’, yet the best he could offer about her sister Joan Fontaine was that, ‘on screen she was charming.’ Ingrid Bergman he described as ‘the most un-actressy of actresses.’ On the other hand, he found Dolores del Rio to be utterly besotted with her own looks. ‘Jesus’, she would whisper as she gazed at her reflection in a mirror, ‘I am beautiful.’ Even though it was Orry-Kelly who created the revealing blouses Marilyn Monroe wore in Some Like it Hot (1959), he declared he would much rather sell hot dogs on Coney Island than ever work with her again! 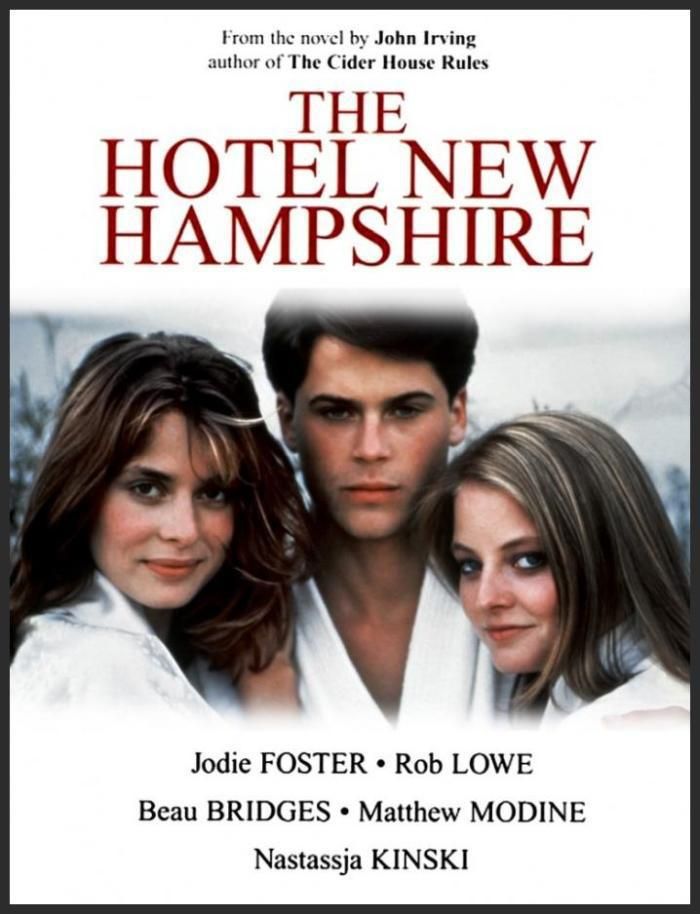 It is hard to believe that a discerning actress like Jodie Foster would find herself turning down good roles in Splash and The Terminator in 1984 and The Breakfast Club in 1985, and choose instead to do something as uneven as The Hotel New Hampshire (1984). She has since admitted that this was the low-point in her career, a career that would not recover until she landed her Oscar-winning turn in The Accused four years later. I had the displeasure to watch The Hotel New Hampshire recently and showed enormous fortitude and determination to watch it in its entirety. I have no doubt, however, that the ‘arty types’ probably love the thing. 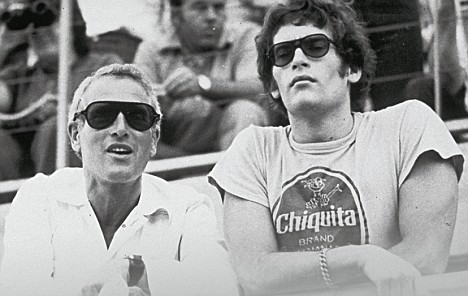 Paul Newman and his only son Scott

Even though his return from making The Towering Inferno (1974) was in the vicinity of $12 million, Paul Newman had a miserable time on the set. ‘Every day there was like going to the dentist’, he said. ‘[Steve] McQueen actually made a count of our lines of dialogue and when he found out I had twenty lines more than he did, he made the producer fatten up his part so he had the same number as me.’ Paul’s son Scott landed a small part as a fireman in the picture. He made several attempts at a career as a movie actor but he lacked the charisma of his father. After just seven minor screen appearances, the last of them in 1977, he lost his life following an ‘accidental overdose’ in 1978. He was just 28. Scott was the step-son of actress Joanne Woodward. 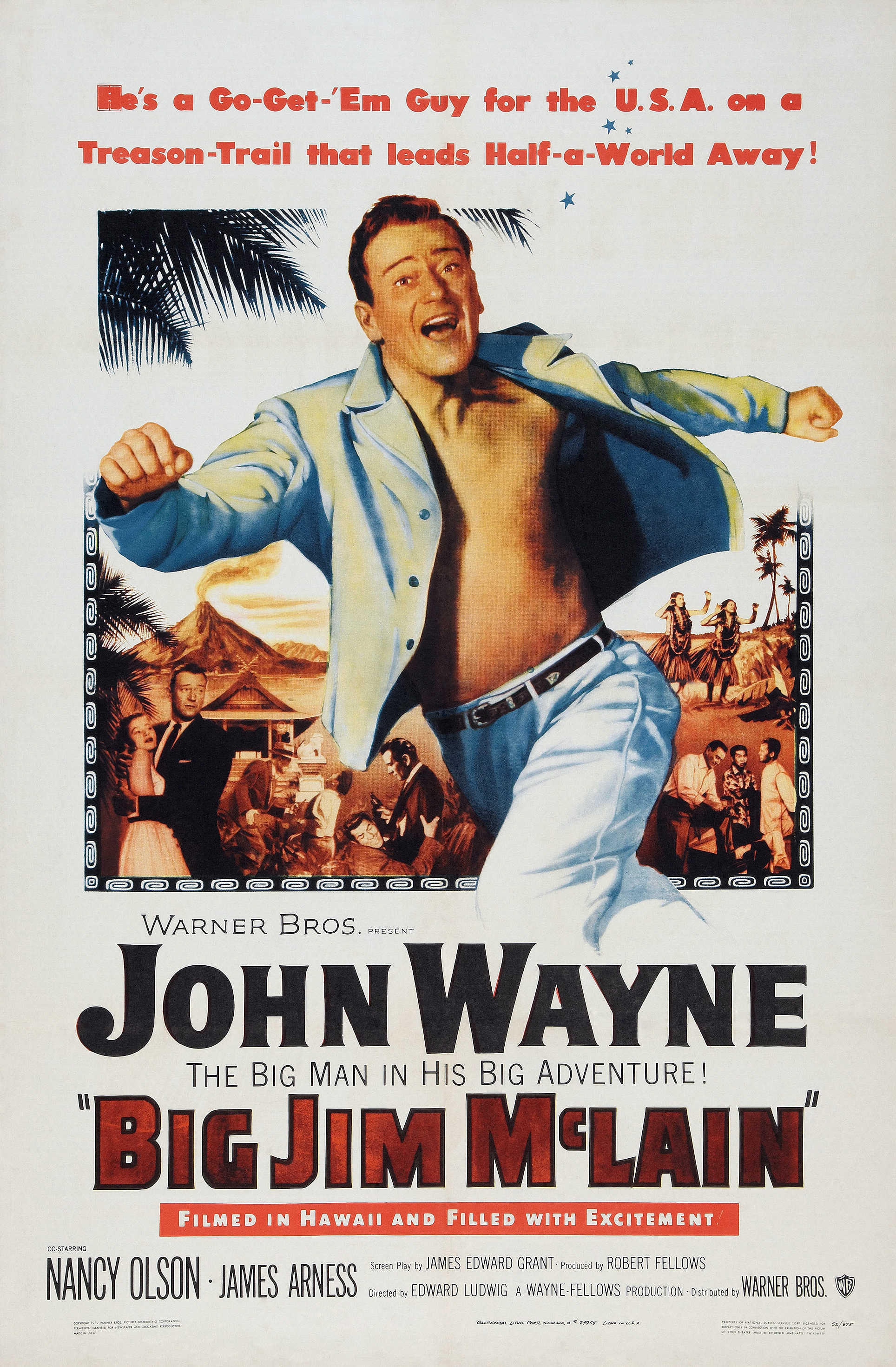 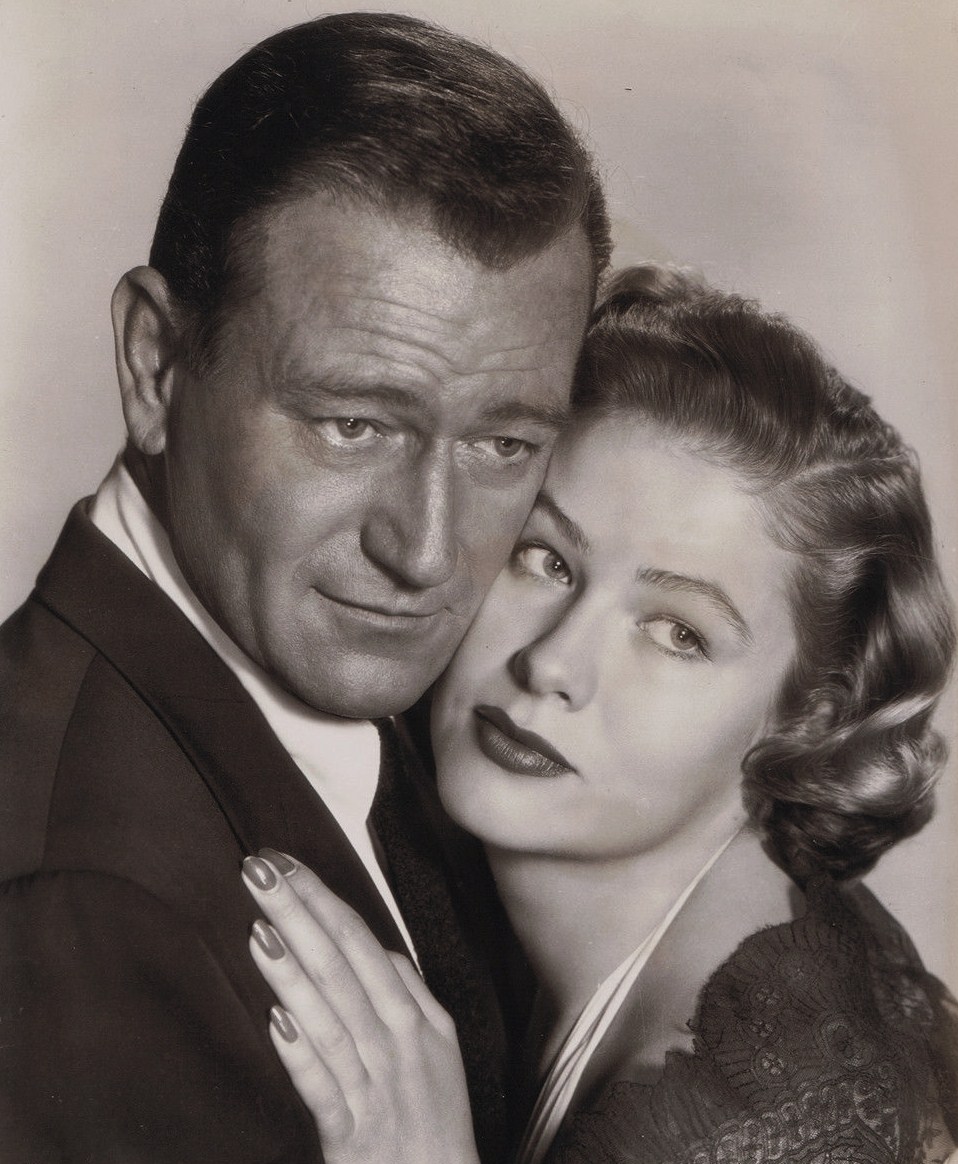 The abominable right-wing feature Big Jim McLain (1952) provided a vehicle for John Wayne to act out his belief that Communists were set to take over his beloved USA. Set in Hawaii, the film had him portraying the lead character McLain, a House Un-American Activities Committee (HUAC) agent hunting down Commies in Honolulu. Nancy Olson loathed the script but accepted the female lead, lured by six weeks in the Hawaiian Islands and the chance to work with ‘the Duke’. At the time she was the third of Alan Jay Lerner’s eventual eight wives. He was the playwright/lyricist who won two Oscars – for An American in Paris (1951) and Gigi (1958).

In 1996 Woody Allen made his only musical, a movie titled Everyone Says I Love You. He purposefully did not reveal until after they had signed contracts, that all those cast would be required to sing. His intention was to have each player sing a song in a natural, unprofessional manner. Goldie Hawn’s performance, however, had to be ‘toned down’ because she was (and is) quite an accomplished vocalist. Conversely, Drew Barrymore has no singing ability whatsoever, (not even in the shower), so she was the only one he spared. Much of the picture was shot in Venice. Julia Roberts made no secret of her flings with a ‘hunky gondolier’, (a recently engaged man named Mario Fontanella), and her 35 year-old bodyguard Lorenzo Sylvan. The moment filming concluded so did both romantic attachments. Par for the course for Jules.

My Cousin Rachel (1952) was Richard Burton’s first Hollywood film. He only signed on because he heard that it was to be directed by his favourite director George Cukor, and that it was to be the vehicle for Greta Garbo’s comeback. Both Cukor and Garbo dropped out and he was left to play opposite Olivia De Havilland whom he instantly disliked. Fresh off her Oscar win for The Heiress, she was impossibly arrogant, he said, insisted on having solitary ‘above – the – title’ billing, and would only answer if addressed as ‘Miss De Havilland’. Burton was rude about her for the rest of his life.