Harry James was a very good trumpet-player and a successful bandleader. He was also a bona fide skirt-chaser all his life and wound up marrying America’s number one pin-up girl of the entire Second World War – Betty Grable. Harry carried around an ego the size of the Grand Canyon and it caused him to resent the impact his choice of wife had on his success. He hated the fact that even the possibility of Betty being at one of his gigs was enough to send ticket sales soaring. Dance-night promoters would deliberately pass around the word that she ‘might just be turning up this time’, and that was usually enough to fill the room. Harry never discouraged these rumours, (he liked the extra money too much), but he knew Betty had far too busy a schedule to be stuck on the road with his band for any serious length of time. Nevertheless, he bitterly resented hearing the inevitable, ‘Where’s Betty?’ wherever he went. On one memorable occasion, infuriated at fans milling around his band’s bus asking that very question, he opened the window and spat on them!

‘Harry never got close to people’, said one of the drummers who performed in his band. ‘I don’t think anybody really liked him.’ Most people regarded him as a very selfish man who liked to drink, gamble and bed women. It was Harry who introduced Betty to booze and horse-racing. Friends say she never had a drink in her life until she met him. At first they did not hit it off at all, but he could turn on the charm when needed and Harry soon won her over. Just how much of his attraction to her was due to her being one of the wealthiest women in America is anyone’s guess, but it is interesting to note that she was earning more money per annum than the President of the United States at the time. 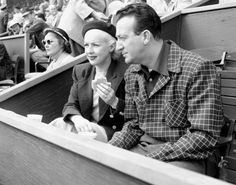 Betty and Harry at the track

It was only a matter of time before their gambling got both Betty and Harry into serious debt. After the war the arrival of rock and roll pretty much put paid to the big bands, Harry’s included. Consequently, by the fifties only Betty was providing any income, but her looks were inevitably fading as she fast approached her ‘used by’ date as a viable movie star. To make matters worse, the charming Harry had begun to dish out beatings to his famous wife. When friends saw the bruises and confronted her about them, Betty’s standard response was that she had experienced a ‘bad session with Harry’. When her contract with 20th Century Fox finally expired she and Harry (successfully for a while) hit the night club circuit in Vegas. They also did cameos on television but by 1965 their problems had become altogether too much. Betty filed for divorce on the grounds of ‘mental and extreme cruelty’. Both would later marry again. In 1973 Betty died from lung cancer and Harry attended her funeral. He would pass away on the 40th anniversary of their wedding. In the John Ford western Rio Grande (1950), the part of Captain St. Jacques is played by a remarkable man named Peter Ortiz. He is easily recognizable in the picture because he is the only one wearing an eye patch. Prior to the commencement of the Second World War, he was the youngest sergeant in the history of the French Foreign Legion, despite being a native of New York City. In 1940 he was wounded and captured in France by the invading German forces, but escaped both the Nazis and the country, made it back to America and enlisted in the US Marine Corps. He soon transferred to the Office of Strategic Services (OSS) where his combat experience and fluency in French were quickly put to use. He was parachuted into France and, by 1944, was a Maquis leader.

German officers were frequenting a night club in Lyons so Ortiz joined them seeking information. He spoke four other languages fluently other than French and was accomplishing his mission when he overheard his Nazi drinking companions insulting President Roosevelt, the USA and the US Marine Corps. Ortiz quietly left the club and went to his apartment nearby. There, he changed into his Marine Corps uniform, (complete with medals), donned an overcoat and returned to the club and the German officers. He walked to their table, removed his overcoat, pulled out a pistol and ordered them all to drink a toast to President Roosevelt. Once that was completed he insisted they drink another to the US Marine Corps, and they again complied. Only then was he satisfied. Ortiz backed out of the room and disappeared into the night. It was a most extraordinary incident indeed.

Peter was just 19 when he joined the French Foreign Legion in February 1932. Signing up for five years’ service in North Africa, he trained at Sidi Bel-Abbes, Algeria, before serving in Morocco fighting the Rif. He was awarded the Croix de Guerre twice and the Medaille Militaire for bravery under fire. He turned down re-enlistment (and an accompanying commission) in 1937, preferring to head back to America to serve as a technical adviser for Hollywood war films. When WW2 broke out in 1939, the USA still neutral of course, so he re-enlisted in the Legion as a sergeant. It was October 1939 and by May 1940 he had earned a battlefield commission. During the Battle of France he was wounded while blowing up a fuel dump and captured by the Germans. The following year he escaped and, via Lisbon, made his way back to America. Ortiz enlisted in the US Marine Corps in June 1942 and because of his training and experience was commissioned as a second lieutenant after only 40 days service. His knowledge of the region saw him sent to Tangier, Morocco and later to reconnaissance duties behind enemy lines in Tunisia for the OSS. Severely wounded in the right hand he was repatriated back to the USA for treatment. After the OSS parachuted him into France he performed many onerous and dangerous tasks, including driving four downed allied pilots through Vichy France to the Spanish border. Sent back to France in August 1944, he was captured again by the Germans and imprisoned for eight months before escaping a second time. After ten days without food, however, he and his fellow escapees were compelled to return to the camp, only to find it now in the hands of the inmates. It was liberated in April 1945.

Interestingly, in April 1954, Ortiz volunteered to come out of retirement as a Marine observer in Indochina but his request was declined. The reason given – ‘current military policies will not permit the assignment requested.’ Colonel Ortiz had accumulated an astonishing array of medals over his long military career. In addition to those mentioned above, he was also the recipient of a Legion of Honor, Legion of Merit, two Purple Hearts and two Navy Crosses.

The films 13 Rue Madeleine (1946) and Operation Secret (1952) are both based on Peter’s exploits. In his somewhat spasmodic movie career he chalked up 29 screen credits. His son, (also a Marine Lt. Colonel) summed up this extraordinary soldier’s screen career. ‘My father was an awful actor but he had great fun appearing in movies.’ Peter Ortiz succumbed to cancer in 1988 and is buried at Arlington National Cemetery.