Maybe he has mellowed as he has aged, but I doubt it. Dustin Hoffman’s contemporaries, actors, directors and producers alike, have always found him a pain in the neck to work with. His talent is conceded, but he is difficult. One director, who did not wish to be named, summed him up succinctly: ‘Next to Hoffman, Streisand is a pussycat. If he weren’t so talented, Hoffman would never get work. Who would put up with that kind of craziness?’ He is a Method actor who, like some kind of Woody Allen clone, has patronized psychiatrists for decades.

as Ben Braddock in The Graduate

Recommended by his former room-mates, Robert Duvall and Gene Hackman, he managed to become briefly enrolled at Lee Strasberg’s Actors’ Studio in New York, but he disagreed with Strasberg’s views on one too many issues and he was out. Long before he hit it big with The Graduate in 1967, he was acquiring a reputation as a promising actor in off-Broadway productions. The fact that he was nearly 30 when he landed the role as the teenaged college grad Ben Braddock, is indicative of his talent for becoming characters much younger or older than himself. He patted and pinched Katharine Ross’s behind during their screen test for The Graduate, (to lessen the tension, he lamely explained), and she was furious and told him so. Later, after winning the role, he grabbed Anne Bancroft’s breast when rehearsing their initial hotel room rendezvous. This was not scripted either, but director Mike Nichols liked it and left the scene in the finished picture. Miss Bancroft’s reaction is not recorded as far as I know. Once again, Hoffman attempted to vindicate his actions by stating that he decided to do it because he was reminded of boys ‘copping a feel’ in the halls at school. Uh – huh. Indeed, he would gain a reputation for this kind of thing, both as an actor and as a director. When holding auditions he liked to ask young actresses intimate questions about their sex lives, very intimate questions. Presumably, this highly questionable practice aids him in making his casting choices. Surprisingly, Hoffman has never had any trouble finding women for intimate relationships, even before he found fame. After The Graduate he was virtually inundated with all kinds of offers. Brando used to tell of the numerous times he was offered a bare breast to autograph. Hoffman, too, experienced this. His love life eventually settled down (for a while anyway) when he married Anne Byrne in 1969 and formally adopted her little girl Katrina.

Anne believed in stage acting, not movie acting, and felt Dustin was selling his talent short by giving up the stage for the glitter of Hollywood. She also tried hard to reign him in when his ego looked like getting out of control. At a New York restaurant one evening they received a message from the proprietor that another guest would like to meet them. It was the renowned heart transplant surgeon Christiaan Barnard. ‘Tell him to come over’, said Dustin. Anne quickly reminded her husband that, of the two men, Barnard was by far the more important personage and that it was Dustin’s place to call on him, not the other way around. So, they got up and joined Barnard at his table and talked movies all evening.

On 5 March 1970 the Hoffman family came within an ace of being blown to smithereens. It was Katrina’s birthday, so Dustin took her and the heavily pregnant Anne shopping for some birthday candles and other artefacts at 11.30 that morning. Thirty minutes later the building next door was blown sky high. A violent explosion had destroyed the building and left a huge hole in the wall where Dustin’s desk stood. Three people were dead. The bodies of a man and two nude girls were found in the rubble. They were members of the radical Weathermen group.

with Meryl Streep in Kramer vs. Kramer

In 1975 Hoffman was given the opportunity to direct a Broadway play titled All Over Town. It was not much of a play, but he went ahead and interviewed fifteen hundred actors and actresses for roles in it. He enjoyed flirting with the women at auditions, whether they were actresses or merely the fiancées of crew members. ‘You have a lovely bosom’, he said to one girl. ‘Do you enjoy sex?’ he asked another. ‘It’s as though you can suddenly see through all these women’s clothes’, he told one actor. ‘X-ray vision – and it’s terrific, rejuvenating.’ He placed his hand on the right breast of one rather haughty-looking actress. ‘I thought, what an obnoxious pig’, she said later. Her name was Meryl Streep. She would later play opposite him in Kramer vs Kramer in 1979 and win herself an Oscar. There were no huge fights on the set, but the two stars were far from friendly. Meryl’s unauthorized biography claims he once slapped her across the face in one scene.

Hoffman has made a lot of movies, some good, some bad, some exceptional. Apart from the pictures already mentioned above, he was terrific in Midnight Cowboy (1969), Little Big Man (1970), All the President’s Men (1976) and Rain Man (1988). He was extraordinary in Tootsie in 1982. It was an achievement in itself that he was able to transform himself (with considerable expert help from make-up man Alan Weisinger) from a 44 year-old Jewish man from New York into a not unattractive woman from the Deep South. The incredible thing about his portrayal of Dorothy Michaels is that it is not that of a guy dressed in drag getting a few cheap laughs. He is actually convincing as a woman. So convincing, in fact, that we are able to believe it when a middle-aged man (played by Charles Durning) falls in love with her/him. 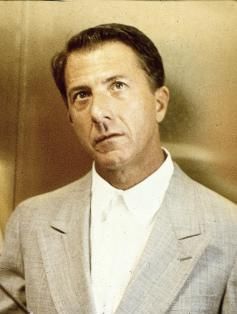 The transformation was meticulously arrived at step by step. Weisinger gave ‘Dorothy’ a new set of top teeth to hide Hoffman’s masculine smile. A pair of spectacles hid his rather prominent nose. Not only did the actor shave his arms, legs (and even the backs of his fingers), he learned that to do so in the damp surroundings of a Sauna, and to shave upwards and not downwards, would produce a more convincing look. The voice took a while, until he decided that his original idea to use a French accent was not as easy to do as a southern drawl. To test himself he first visited his daughter at her school dressed and made up as Dorothy, met her teacher, and passed with flying colours. The crowning test came, however, when he arranged to meet Jon Voight, his co-star from Midnight Cowboy, at the Russian Tea Room. Incredibly, Voight failed to recognize him. It was a staggering achievement.

Tootsie was made for $22 million, $4.5 million of which was Hoffman’s fee. It grossed $177 million in the USA alone and he was nominated for another Oscar. As often happens with Academy Awards he was unfortunate to be nominated in a difficult year, unlucky to be up against Ben Kingsley who won for his masterly portrayal of the title character in Gandhi. Dustin Hoffman is not everybody’s cup of tea, but his ability is undeniable. He gives the impression that acting is everything to him and that the rest of his life runs a distant second. A lot of actors feel that way, of course, an approach to life that leaves many of us bemused. But then, we have not chosen acting as a profession, much less as a way of life.