The Vikings was shot in the summer of 1957 when its star, Kirk Douglas, was already 40 years old. Einar, the character he was playing, was supposed to be in his twenties. Well, it’s Hollywood, so close enough is good enough, I guess. Kirk’s age may or may not have had something to do with his generous offer to reward the extra who grew the best beard prior to filming. On day one of the shoot all the extras hired to play Vikings turned up with luxurious facial hair, while Kirk arrived clean-shaven and appearing much younger than everyone else! Whilst on the subject of ages, Ernest Borgnine was cast as his father in the picture when, in real life, Kirk was a month and a half older than him. Incidentally, all the other major players in this movie, Tony Curtis, Janet Leigh, Ernie, Frank Thring and James Donald, have long since shuffled off this mortal coil. But not Kirk. He turned 100 in December 2016. Janet Leigh was married to co-star Tony Curtis when they made this picture together. When they wed in 1951 she was only 23, yet Tony was her third husband. She was the first of his six wives. As usual, she was billed beneath him. Back in 1953, when they made Houdini together, she made her feelings on billing very clear to interviewers: ‘I don’t care if he’s made one picture and I’ve made a hundred. I will always take second billing to my husband.’ Very generous. Curtis and Douglas were co-stars here and hit it off from the start, so much so that Tony was more than happy to take minor billing under Kirk in Spartacus two years later. It is said that Kirk agreed to be killed by Tony in The Vikings on the condition that he would be able to get even in Spartacus.

In a Viking museum in Norway there exists the skeleton of a real Viking ship salvaged from a fiord several years before The Vikings was shot. It was used as the blueprint for the three ships constructed for the movie. However, when it came time to sail these vessels a major problem arose. Modern men are far taller (and have considerably longer arms) than their Viking predecessors. Consequently, it was soon discovered that rowing the ships was an impossibility unless every other oar-hole was plugged. The rowers simply could not extend their arms without colliding with the oarsman ahead of them. The oar-walking scenes were practiced over and over by stuntmen until they became adept at performing an activity that had not been seen anywhere in the world for over a thousand years. Quite a sight, especially for Norwegian historians. Whilst on the history thing, it should be noted that the Norse never referred to themselves as Vikings. Not as a nationality anyway. The word applied to the profession of raiding and marauding. It had nothing to do with ethnicity.

A lot of effort went into creating authentic Norse costumes. Up to a point anyway. For some reason, somebody in a position of authority decided to dress Tony Curtis in shorts and a leather jerkin. Shorts! We are talking Scandinavia here, not the Hawaiian Islands. He and Douglas later recalled being very cold throughout the shoot. As if walking about on dry Norwegian land in a pair of shorts wasn’t cold enough, Tony’s role called for him to be tied to stake overnight in a rock pool (still in his shorts), and to be eaten by a bunch of man-eating crabs and/or drowned – whichever came first. He probably felt a third cause of death was more likely. Hypothermia.

The movie (thankfully) spares us the sight of the ‘blood eagle’ ritual, described in grisly detail in the original saga on which the script is based. It called for the hapless victim to have his ribs broken away from his spine at the back, after which his lungs would be yanked out to resemble the ‘wings’ of the eagle. Charming. For the record, I should point out that revisionist historians dispute the existence of such a practice. It was just the product of someone’s vivid (and rather disturbing) imagination.

As happens in most costume dramas, there are a number of anachronisms rearing their ugly heads throughout the movie. The Vikings raided England in the 9th and 10th centuries, so where did the castle come from? Castles did not appear in Britain until after the Norman Conquest in 1066. When Kirk throws his head back and screams at the end of the picture his mercury amalgam fillings in his teeth are clearly visible. As far as I am aware the Vikings did not have a dental plan. And finally, when Kirk sails his long ship home to the fiord, a number of motor cars are clearly visible through the trees on the other side of the water. Oops!

attacking a castle that hasn’t been built yet

I guess one could argue that the movies went through a ‘Viking craze’, although I believe it would be more apt to describe it as a short-lived ‘fad’ that started with this picture in 1958 and ended with The Long Ships in 1964. Two movies only. Perhaps, it was some dubious casting that put paid to the public’s lack of interest in Norse dramas. After all, Tony Curtis as a Viking? Skinny little Tony? The casting department must have thought he did OK because, just six years later, another baby-faced actor, Russ Tamblyn, was cast to play a Viking warrior in The Long Ships. Different producers, same error. Russ was a terrific dancer, but would anyone seriously fear him in a sword and axe fight? 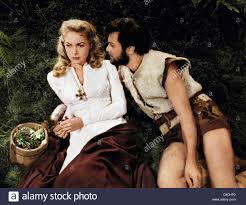 Actually, by 2013, the wheel swung full circle when a highly acclaimed television series, titled simply Vikings, went into production. More than likely it was born out of the phenomenal success of another series set in ancient times, Game of Thrones, which started its astonishing reign in 2011. This, coupled with the modern film fan’s acceptance of pictures soaked in brutality and extreme violence, has sent Vikings into its fifth season. Well, whatever floats your boat, I suppose…