There have been a few blunders (and near-blunders) at the Oscars ceremonies over the decades, although the shambles at the 89th Academy Awards of 2017 reached a new low. The debacle brought about when Warren Beatty was given the wrong results envelope for Best Picture was bad enough, but there was an even worse error earlier that few were probably aware of at the time. Australian costume designer and four-time Oscar nominee Janet Patterson passed away in October 2016 and was honored in the ‘In Memoriam’ segment, but somebody got it wrong. Instead of her image being displayed on the big screen, a picture of her good friend, the very much alive Australian film producer Jan Chapman, was shown instead. ‘I was devastated by the use of my image in place of my great friend and long-time collaborator Janet Patterson’, said Ms. Chapman. ‘I had urged her agency to check any photograph which might be used and understand that they were told that the Academy had it covered. Janet was a great beauty and four-time Oscar nominee and it is very disappointing that the error was not picked up.’ And the cock-ups did not end there either. Comedian Garry Shandling and sitcom star of ‘The Brady Bunch’, Florence Henderson, had also passed away but were completely overlooked!

The announcement of the wrong Best Picture winner appears to have been due to an incorrect envelope being handed backstage to presenters Warren Beatty and Faye Dunaway. On opening it, Beatty paused, puzzled, before handing it to Ms. Dunaway to read out the result. Evidently, the card inside read ‘Emma Stone for La La Land. Clearly it was the result for Best Actress, an award that had been presented earlier. Although both Beatty and Dunaway seemed confused, neither thought to question the card. Faye saw La La Land beneath Emma Stone’s name and decided to announce that picture as the winner. To their great credit, the La La Land group handled what must have been bitter disappointment with commendable grace, calling the real winners (for Moonlight) to the podium before quietly leaving the stage to them. Beatty attempted to explain the fiasco at the microphone, although he really should have queried the card as soon as he read it. 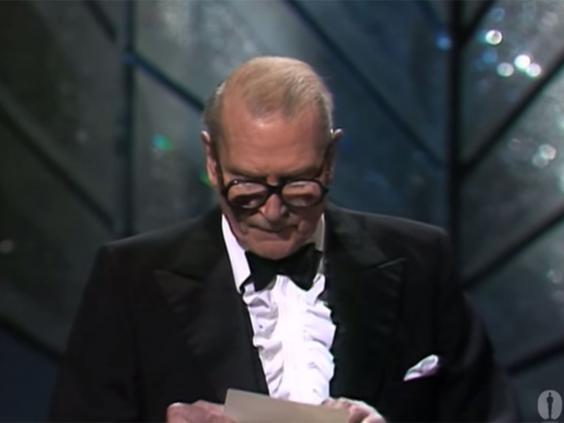 It was only through sheer blind luck that Sir Laurence Olivier did not read out an incorrect winner back in 1985. After delivering a prepared, embarrassingly fawning speech to his peers, he opened the envelope and, instead of reading out the nominations, simply announced the first name on the list as the winner. Fortunately for Sir Larry, the nominees were listed alphabetically with the actual winner, Amadeus, at the top! About fifty years earlier Spencer Tracy was presented with an Oscar for his performance in Boy’s Town (1938), only to discover that it had been engraved to ‘Dick Tracy’. The Academy hurriedly sent him a replacement bearing the proper inscription. Even more bizarre, when Alice Brady was unable to attend the 1938 Oscars to receive her Best Supporting Actress Academy Award for In Old Chicago, a complete stranger ascended the stage and claimed it on her behalf. Then he absconded with it. Neither the thief nor the statuette were seen again. Alice was not as fortunate as Tracy when it came to replacing her award. She passed away before the Academy could forward another one to her. Will Rogers was responsible for a particularly awkward moment for director Frank Capra at the 1935 ceremony. Rogers read the name of the Best Director winner to himself, then held the statuette aloft, exclaiming: ‘Come and get it Frank!’ Capra positively bounded towards the stage but was beaten there by the real winner – Frank Lloyd. There had been two Franks nominated that year. In his excitement Capra had forgotten that.

There was drama at the 45th Academy Awards in 1973 when Marlon Brando refused to accept his Oscar for The Godfather. Presenters Roger Moore and Liv Ullman watched in silence as Sacheen Littlefeather, a little-known Apache actress and the then-president of the National Native American Affirmative Image Committee, ascended the stairs to the stage and politely waved aside the statuette offered by the English actor. Her presence was fully expected, Brando having announced the day before that he would boycott the proceedings and send Miss Littlefeather in his place. She held in her hand a lengthy speech, compiled by Brando himself, which she promised to release to the press later. Her gracious and beautifully presented ‘non-acceptance’ speech on Brando’s behalf was greeted with a mixture of applause and derision by the gathering. It basically protested the treatment and representation of American Indians in the movies and publicly supported the American Indian Movement (AIM) in its stand at Wounded Knee at that time. It was generally felt, however, that Brando himself should have voiced his protest and support for AIM, rather than place the courageous young lady in such a difficult situation. The 1974 ceremony received an unexpected fillip when a young conceptual artist, photographer and gay rights activist named Robert Opel burst upon the stage, stark naked, just as the Best Picture was about to be announced. Co-host David Niven memorably commented in the man’s wake: ‘Isn’t it fascinating to think that probably the only laugh that man will ever get in life is by stripping off and showing his shortcomings.’ It was later revealed that this was not Mr. Opel’s first naked fly-by, having shown up stark bollocks at a few Los Angeles City Council meetings protesting the ban on nudity at area beaches. It turned out that the man was active in the gay liberation movement and in art circles. Immediately after the stunt a fully clothed Opel appeared on ‘Winner’s Row’ and held a press conference! Later still, he guested on The Mike Douglas Show and was hired by the future producer of Grease, Allan Carr, to streak at a party for Russian dancer Rudolph Nureyev.

Opel eventually moved to San Francisco and, in 1978, opened the nation’s first openly gay art gallery. Tragedy struck in the very next year when the 40 year-old and two of his friends were taken captive by two men who burst into his art studio and demanded money and drugs. The three victims were ushered into a back room and tied up. Opel was then fatally shot in the head. Rumors have existed since that day that his death was not simply the result of a bungled robbery, and that his notorious Oscars streak may have been a publicity stunt. Neither theory has been proven, however. There is even talk that Niven’s witty riposte might have been scripted. That, too, remains a rumor and nothing more.

In the same year that saw the demise of Mr. Opel, British actress Vanessa Redgrave caused a stir when she presented her acceptance speech for her supporting actress performance in Julia. The moment she mentioned ‘Zionist hoodlums’, there were howls of derision from a section of the audience, but she stoically pressed on. Earlier that year she had funded and narrated a documentary on the Palestinian Liberation Organization (PLO) which had alienated the Jewish Defense League, those she now described as ‘Zionist hoodlums’. Her speech is presented here in its entirety:

‘My dear colleagues, I thank you very, very much for this tribute to my work. I think that Jane Fonda and I have done the best work of our lives and I think this was in part due to our director, Fred Zinnemann. And I also think it’s in part because we believed and we believe in what we were expressing. Two, out of millions, who gave their lives and were prepared to sacrifice everything in the fight against fascist and racist Nazi Germany. And I salute you and I pay tribute to you and I think you should be very proud that in the last few weeks you’ve stood firm and you have refused to be intimidated by the threats of a small bunch of Zionist hoodlums whose behavior is an insult to the stature of Jews all over the world and to their great and heroic record of struggle against fascism and oppression. And I salute that record, and I salute all of you for having stood firm and dealt a final blow against that period when Nixon and McCarthy launched a worldwide witch hunt against those who tried to express in their lives and their work the truth that they believed in. I salute you, and I thank you, and I pledge to you that I will continue to fight against anti-Semitism and fascism. Thank you.’ 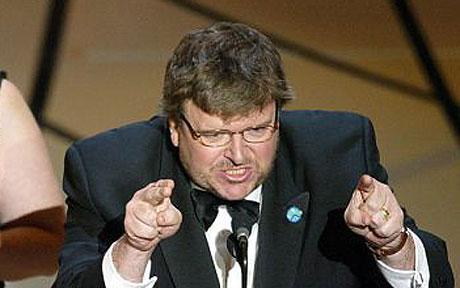 In recent years a lot of winners have used their acceptance speeches to voice their political beliefs for one cause or another. One of the more forthright and provocative of these was undoubtedly that of the outspoken Michael Moore who launched into President George W. Bush’s declaration of war on Iraq in 2003. ‘We live in a time when we have a man sending us to war for fictitious reasons’, he shouted to a mixture of applause and boos. ‘We are against this war, Mr. Bush. Shame on you, Mr. Bush!’ His words were heard around the world by millions of viewers, not that they altered anything. The war went ahead and the dead piled up on both sides in a war that should never have been fought in the first place.