Try as I might, I find it extremely difficult to seriously dislike Marlene Dietrich. She was a hedonist, cheerfully bisexual, afraid of nothing and no-one, and she called a spade a spade. Almost without exception, she was friendly with her colleagues, heads of state, great writers and other famous individuals with whom she came in contact. She counted among her close friends the often difficult Ernest Hemingway, who was her confidant but not her lover. She called him Papa and he called her (affectionately) ‘Dearest Kraut’. But there were negatives as well. She chose career and having fun over taking care of her only daughter, and her outrageous conduct quite often over-stepped the line. But more of that later. 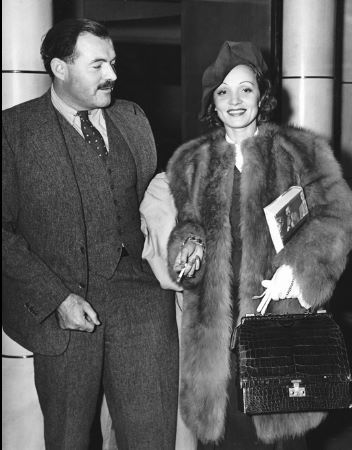 Marlene was born in Berlin in 1901. Her father, incidentally, flew in the first Zeppelin air raid over London during World War One, a detail she was always careful not to divulge to the British press. She married only once, and that was in 1923 to a young film director named Rudolph Sieber. It was a completely open marriage that produced their daughter Maria a year later. The girl was eventually raised by her father and his girlfriend, a Russian actress named Tamara Matul. Before that, in 1930, Marlene took Maria with her to California. The girl even had a small role in Josef von Sternberg’s 1934 film The Scarlet Empress in which she played Catherine the Great as a child. During World War Two she studied acting and, like her famous mother, toured with the United Service Organizations (USO), entertaining Allied troops in various theatres of war. Maria initially took her father’s surname, but ultimately became known as Maria Riva via her second marriage in 1948. Today (2017) she is a 92 year-old widow, her husband having passed away in 1999. Once her acting career hit top gear, Dietrich found it necessary to ask her husband to take care of their daughter. Free to enjoy her bisexuality, Marlene took lovers of both sexes wherever and whenever she felt the inclination. Well-known lesbian socialite Mercedes de Acosta ditched her lover Greta Garbo and chose to live with Marlene instead. Their relationship was an open secret in Hollywood, much like the similar situation that existed between actors Cary Grant and Randolph Scott who shared a beach house for years. One of Marlene’s lovers in the mid-thirties was Douglas Fairbanks Junior. Both pro-British, they were appalled to learn that Edward VIII was planning to abdicate the English throne in order to marry the American divorcee Wallis Simpson. Marlene described Simpson as ‘that homely, flat-chested woman’, and decided that the best way to save the monarchy was for her to seduce Edward before he could announce his abdication! Fairbanks thought the plan was dumb and attempted to talk her out of it. In the end Marlene took so long preparing to seduce her prey that she arrived at Fort Belvedere too late. Edward had already left to announce his abdication. on the arm of Doug Fairbanks Jr.

An even more bizarre plan to murder Adolf Hitler also failed to reach fruition. Marlene confided to an astonished Fairbanks, ‘I would gush over how I feel about him, intimating that I am desperately in love with him. I’ve heard he likes me and I’m certain he would agree.’ The lady’s ego was boundless. Her scatter-brained plan was, she said, to enter his quarters stark naked – except for a poisoned hairpin! Fairbanks always believed she was mad enough and brave enough to try it, but the opportunity never arose.

In Maria’s lengthy (800 plus pages) book about her mother, titled ‘Scratching at the Gold Surface: Marlene Dietrich’, she recounts an example of her famous mother’s outrageous behavior. Sixty-two year old Marlene met Maria’s sensible, dependable husband on one occasion. Dietrich promptly opened her handbag, extracted a pair of her pink panties, and waved them under his nose. ‘Smell’, she said. ‘It is him. The President of the United States. He was wonderful.’ She was referring to John F. Kennedy, of course. Marlene had already slept with his father back in 1938 at the Hotel du Cap near Cannes. ‘I think he was even faster than his father’, she told Maria. ‘He had an even busier schedule. They both kept their watches on’, she added as an afterthought. Of course, JFK was only one of many, many lovers. Frank Sinatra, John Wayne, Gary Cooper, Yul Brynner, Jimmy Stewart, Fairbanks Jr, not to mention an assortment of generals of the US Armed Forces, all found their way into her bed. Stewart replaced Fairbanks in her affections when she made Destry Rides Again with him in 1939. The liaison didn’t last. None of her affairs ever did. She became pregnant to him, aborted the child and moved on. French songstress Edith Piaf was another short-lived intimacy. Marlene always said that, sexually, ‘women are better, but you can’t live with a woman’. There were scores more lovers (possibly hundreds) of both genders.

Marlene arrived in France just after D-Day, ready to do her bit for the troops with the USO. When George ‘Blood & Guts’ Patton entered the besieged town of Bastogne during the Battle of the Bulge, she was right alongside him. Their affair lasted until the youngest general in the history of the American Army, 37 year-old James Gavin, came bobbing along. She was soon warming his bed, a fact that did not escape his shattered wife. The unhappy woman openly admitted that she could not hope to compete with the legendary actress. She and Gavin divorced after the war ended.

When she entered Berlin with the US Army, Dietrich used her high level connections to help locate her 93 year-old mother who was surviving in squalor among the ruins of the German capital. Marlene would not know it, but a similar fate awaited her in her dotage. She had hoped to spend her final years with Rudi, but he passed away in 1976. A reclusive Marlene, flat broke and alone in her Paris flat, was reduced to singing ‘Falling in Love Again’ over the telephone to a rich old doctor, a kind of geriatric phone sex. She used giant suppositories to induce sleep in her last years. According to Maria, her mother dubbed them Fernando Lamas, after the man she considered to be the most boring person in Hollywood. One of the 20th century’s great femme fatales, Marlene Dietrich died alone in 1992 at the age of 90.