It has been 60 years since my grand-parents dragged me along to see CB DeMille’s The Ten Commandments at our local theatre. I think their plan was to give me a dose of good old religion, but all it did was scare the knickers clean off me! Three things happened in that picture that gave me nightmares for years afterwards. The parting of the Red Sea and the consequent drowning of Pharaoh’s army instilled in me fear of water that persists to this day. The earthquake scene when Moses called upon the Big ‘G’ to smite all the folks that had just trudged out of Egypt and a life of slavery not only puzzled me, but it scared Hell out of me too. After all, they were having a party for crying out loud! Next minute the earth is opening up and swallowing everyone. If this was supposed to put the fear of God into me, well, it did. But it also had me questioning his actions. Heston as Moses – Brynner as Rameses

It was the third thing that really threw me for a loop, however, and that was when He sent around that foggy thingy to kill all the first-born in the land. My grand-mother attempted to explain the whys and wherefores to me, but all I could think about was the fact that I was the oldest kid in our family. I was the first-born. Even at the tender age of nine it struck me that something wasn’t quite right here. What if the first kid was the nice kid (like me) and his younger brother was the nasty one? Why should the good kid get zapped? Who does God think he is making that kind of call? All the way home (and for months afterwards) I kept wondering – what if he does it again? I’ll be a goner without doing anything wrong. So, something else started creeping into my head. What is the point of being good if He has a bad day and decides to kill all the first-born again, and me with them, anyway? So, the next time I went to the corner shop I pinched a chocolate! Fortunately, I was far too cowardly to ever do it again, so that was the full extent of my life of crime. But, to my surprise, nothing happened to me either. I was never found out. God never punished me. He did not know everything, despite my grand-mother’s assurances that he did. I relaxed a little. But the seeds of doubt had been sown. 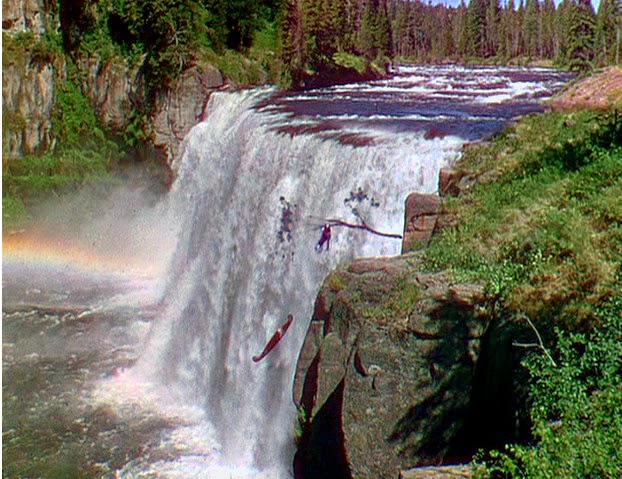 the waterfall scene in Unconquered (1947)

My apologies for that rather long-winded introduction to CB’s rotten movie, but I figured that if the movie is a dud, perhaps an examination of its dud premise might help explain it. And it really is a dud picture. CB was one lousy film-maker. If you ever get the chance to see his Unconquered (1947) again, and you watch Gary Cooper and Paulette Goddard escape death when they go over the waterfall, you will appreciate how bad a director he was. Any director with a shred of self-respect would have removed that pitifully stupid scene from the picture. But not CB. 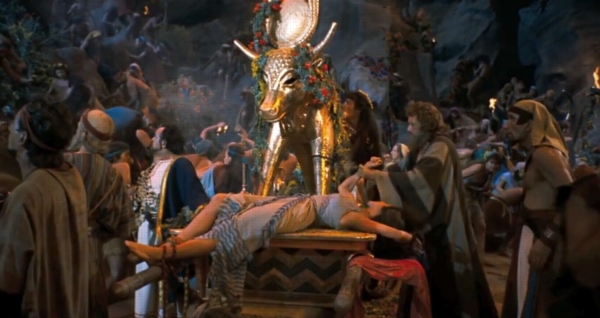 Anyway, back to The Ten Commandments. I will say two things for DeMille – the guy had a sense of humour and he was forgiving. Most unusual characteristics for movie directors. One of my all-time favourite Hollywood anecdotes (perhaps, even the favourite) concerned him during the shooting of this picture. Apparently, he was atop his ladder, megaphone in hand, giving last minute instructions to hundreds of extras prior to the orgy scene at the foot of Mount Horeb, when he spotted a young woman jabbering away to her friend and ignoring his instructions entirely. ‘Here’, said CB, pointing out the unfortunate girl, ‘we have a young woman whose conversation with her friend is apparently more important than listening to instructions from her director while we are engaged in making motion picture history. Perhaps the young woman would care to enlighten us all, and tell us what the devil is so important that it cannot wait until after we make this shot.’ Her response is the stuff of legend. ‘I was just saying to my friend here’, she replied, ‘I wonder when that bald-headed old fart is gonna call ‘Lunch!’ DeMille, to his everlasting credit, paused for a moment, then lifted his megaphone to his mouth, and shouted, ‘Lunch!’ Now that’s funny. I’ve liked the guy ever since I read that story for the first time. I also admire him for ignoring the blacklist and giving Edward G. Robinson a role in his film. But he still couldn’t direct traffic.

parting of the Red Sea

The exodus from Egypt sequence has to be one of the most boring, over-long scenes in motion picture history. There were 14,000 extras and 15,000 animals used in it and CB lingered over every single one – or at least it seemed so! The parting of the Red Sea was achieved by flooding two large dump tanks and then running the film in reverse. The frothing, churning walls of water were produced by constantly dumping it into catch basin areas and manipulating it. The catch basin still exists today at Paramount near the middle of the studio. There is nothing in history (or the Bible) to indicate that the pharaoh involved in the Moses story was Rameses, by the way. In fact, there are no pharaohs mentioned by name anywhere in the Bible. Exodus claims the Hebrews built the city of Rameses, but for all we know they may have named it for the Sun-God, Ra.

Some interesting trivia: Charlton Heston admitted in a 2004 interview that he provided the voice of God in the movie, and that his 3 month old son Fraser played the baby Moses in the wicker basket on the Nile. Nina Foch played Bithiah, the mother of Moses, yet she was a year younger than Heston. Chuck was born in 1923, Nina in 1924. By the way, Anne Baxter’s character was indeed Nefretiri, not Nefertiti. They were two different women. Nefertiti lived 60 or so years earlier. The story goes that CB changed Anne’s character name to Nefretiri to avoid any ‘boob’ jokes, but that was not the case. He got his history spot on. Initially, Audrey Hepburn was slated to play Nefretiri, but it was decided she was too flat-chested, so it went to Baxter. slaves ‘sweltering’ in the brick works

The hailstones you see falling into Rameses’ palace were actually popcorn spray-painted white so they wouldn’t hurt anybody. Bible enthusiasts would no doubt have noticed that one of the plagues sent by God was missing from the film. CB deliberately left one out. He thought that the ‘frog plague’ was not scary enough, that Egyptian women running and screaming as frogs hopped after them would probably bring more laughs than gasps of horror. True. The scene where the slaves are working in the brick pits under a sweltering sun was shot on a soundstage – an ice-cold soundstage. Under ordinary studio lights the mud would have dried. The scantily-clad players were covered with oil to simulate perspiration when, in fact, they were freezing. minus his horse, of course.

It may sound odd (in fact it should sound odd), but DeMille’s first choice to play Moses was not Charlton Heston – it was William Boyd! For younger readers who may not appreciate the significance of this, Bill Boyd was known the world over for his portrayal of the cowboy hero of children everywhere – Hopalong Cassidy. It is said that Boyd turned down the role, telling CB he felt ‘Hoppy’ playing Moses would seriously harm the movie. In truth, he was unable to get away from his Hopalong Cassidy commitments anyway.

If anyone doubts the power of religious movies to draw cinema-goers, I should point out that The Ten Commandments grossed 65.5 million dollars in 1956, the equivalent of around $450 million today. Only Mel Gibson’s The Passion of the Christ (2004) has earned more in that category. For years The Ten Commandments was the second-highest grossing film of all time, religious or otherwise, behind 1939’s Gone with the Wind.