NBC marketing staff confronted company executives after the bean counters decided to terminate the series after three seasons and 80 episodes over four years. The powers that be felt that the show’s inability to rise above 52 in the general ratings warranted cancellation. The marketing people pointed out to them, however, that the audience profile had the largest concentration of viewers aged 16-39, the most sought after portion of the audience by advertisers. In short, they blew it. The series really should have continued.

Spock and the Vulcan salute

The split-fingered gesture that Mister Spock uses throughout the series is an old Hebrew sign that actor Leonard Nimoy saw in a synagogue when he was an 8 year-old child. Hebrew priests known as Kohanim used it to address the congregation. It formed the first letter of the Hebrew word ‘Shaddai’, their word for the Almighty. When Nimoy came to play Spock he introduced the sign as a Vulcan salute. The ‘Vulcan neck pinch’ was also his idea. Spock was originally to have red-colored skin, but since most TVs in America were black and white it photographed black, so the idea was canned. When the series was dropped in 1969, Nimoy simply moved to the sound stage next door on the Desilu lot and took over from Martin Landau in the Mission Impossible series.

The word ‘ego’ held no mysteries for William Shatner, the actor who played Captain James Kirk. One of his first ‘requests’ was that his name in the opening credits be 10% larger than those of his co-stars Leonard Nimoy and DeForest Kelley. According to episode writer Norman Spinrad, Shatner’s contract guaranteed him more lines of dialogue than anyone else. George Takei, who played Mr. Sulu, revealed that the show’s star often took lines from him to fulfill that requirement. Shatner hotly refuted this and the two men have not been on speaking terms since. Shatner also took lines from Nimoy and became extremely annoyed at the popularity of the Spock character feeling, understandably so, that Captain Kirk’s character was the star of the show. When a Life magazine reporter came onto the set to do a profile on Nimoy. Shatner spat his dummy, stormed off to his dressing-room, and refused to emerge until the photographer had been ordered from the building. Nimoy, equally petulantly, would not leave his own dressing-room until the photographer was allowed back on the set. It would not be until the making of the Star Trek movies that the two actors would reconcile and remain close friends for decades. Doohan (Scotty) and Takei (Sulu), however, disliked Shatner on both a professional and personal level. Shatner was touchy about his 5’9” height too, so he wore 2” heels and 1.5” lifts to make him appear over 6’ tall, thus taller than Nimoy and the others. Unfortunately, it distorted his posture and caused his stomach to stick out, so the producer Gene Roddenberry forbid him to wear the lifts. Nimoy and co. had to make do with 1” heels opposed to Bill’s 2” ones. The green captain’s uniform was introduced because Shatner used to gain weight during each season. It was less noticeable in green than it was in the original gold. The transporter beam was created simply by blowing aluminum powder into the path of a bright spotlight. It will probably surprise many fans to learn that the precise order, ‘Beam me up, Scotty’, was never uttered by Captain Kirk throughout the entire series. There were many variations on those words, but he never ever said those precise words. Roddenberry found it cheaper (and quicker) to have parties beamed up and down, rather than repeatedly show the Enterprise landing and taking off all the time from various planets.

Both producer Gene Roddenberry and actor James Doohan (Scotty) paid in advance for small vials of their ashes to be carried into space and launched into orbit via satellites after their deaths. Doohan’s son quite recently bid for a life-size replica of his father at a Hollywood wax museum auction, but was outbid by an unknown buyer.

Nichelle Nichols played Lt. Uhura, becoming the first female African-American regular character in a series, preceding Diahann Carroll in Julia by two years. Dr Martin Luther King Jr. himself personally asked her to continue in the role, as it was so rare to see a black American portraying a positive character on TV at that time. In the 1970s NASA even recruited her to help recruit minority and female astronauts. It was through her efforts that Guion Bluford (the first African-American in space) was signed up. She also recruited Judy Resnik (the first Jewish astronaut) and black astronaut Ron McNair. Sadly, both Judy and Ron perished in the Space Shuttle Challenger disaster in 1986. 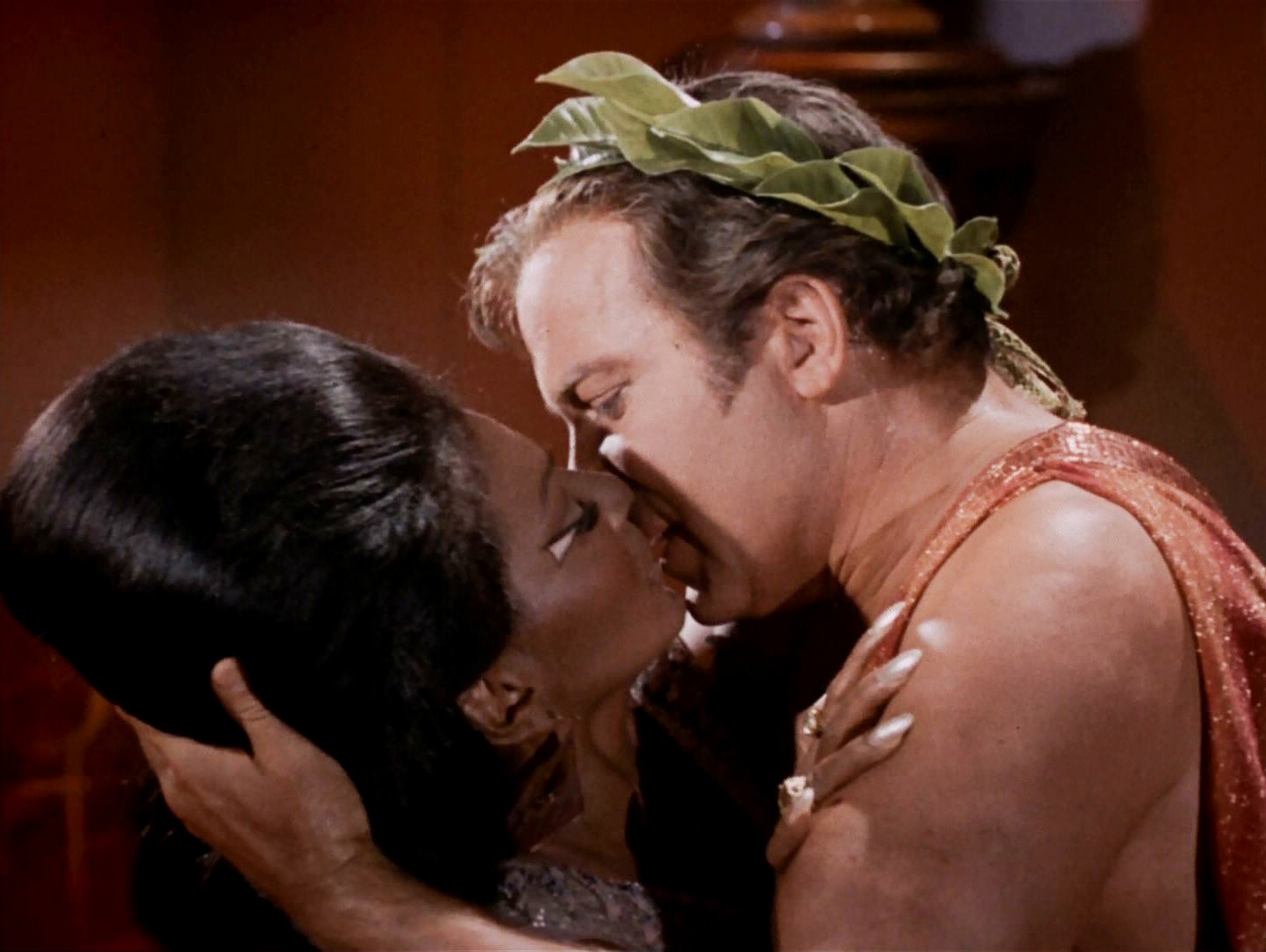 Uhura & Kirk kissing in the

On 22 November 1968 an episode titled Plato’s Stepchildren was aired which featured the first ever scripted kiss between a white man (William Shatner as Captain Kirk) and a black woman (Nichelle Nichols as Lt. Uhura) on an American TV show. It created a furor, especially in the Deep South, and drew more hate mail than any other moment in the history of a series that dabbled in social commentary week after week. An episode of the British series Emergency Ward 10 holds the distinction of having aired the first inter-racial kiss on TV anywhere, predating Star Trek by about two years. Incidentally, in 2011, Nichelle revealed that she had initially auditioned for the role of Spock!

The homosexuality of George Takei (Mr. Sulu) was a closely guarded secret throughout the show’s tenure, but that did not prevent him from approaching Roddenberry with an idea for the crew of the Enterprise to encounter an alien race of homosexuals in an episode. Gene liked the idea but ultimately rejected it as being too controversial at that time. 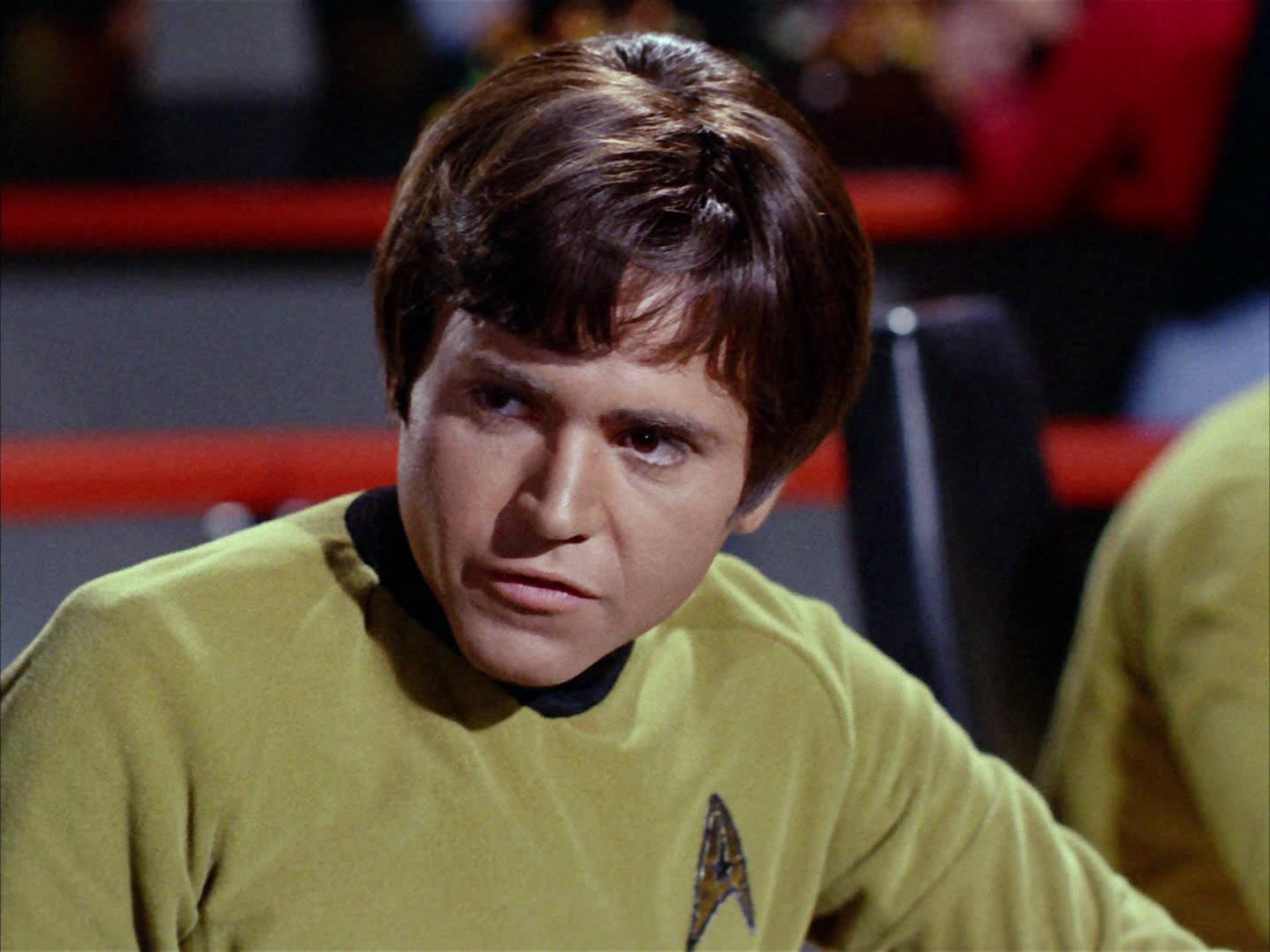 Mr. Pavel Chekov (Walter Koenig) was introduced as a young sex symbol for teenage girls. A rumor circulated that his Russian character was created because the Moscow newspaper Pravda had complained that none of its countrymen appeared in the program, despite the USSR having initiated the space race. The rumor was quite false. Star Trek was not broadcast in the Soviet Union. In fact, the inspiration for Chekov’s character originated with both The Beatles and The Monkees, hence his general appearance closely resembling Davy Jones of The Monkees. His middle name was Andreievich, by the way. Not every Star Trek character was given a Christian name. In source books Mr. Sulu had the first name Hikaru, but it was never uttered on-screen. Nichols and Roddenberry agreed on ‘Nyota’ as Uhura’s first name, it being Swahili for ‘Star’. Roddenberry actually created both the Uhura and Nurse Christine Chapel characters for the series to give Nichelle and actress Majel Barrett roles. He was sleeping with both ladies when he conceived the series. Later he would marry Miss Barrett. Majel and her husband Gene Roddenberry

The Star Trek theme was written by composer Alexander Courage. Unknown to him initially, Roddenberry had cunningly penned some words to the popular theme, words he had no intention of ever using on-screen or off, but which gave him 50% of all residuals every time the theme was played anywhere in the world. 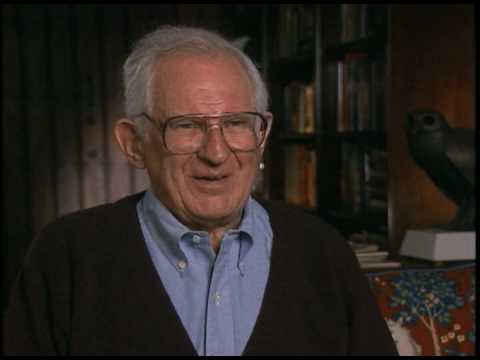 When Gene Roddenberry wrote that Captain Kirk’s home state was Iowa, he did not specify any particular town or city. Steve Miller, a member of the Riverside City Council in Iowa, wrote to him requesting permission for the town of Riverside to call itself ‘The Future Birthplace of James T. Kirk’, and Roddenberry agreed. Today, Riverside has several Star Trek– related attractions, displays and events, including a replica of the USS Enterprise (called the USS Riverside), and an annual event called the Riverside Trek Festival.

Actress Grace Lee Whitney was signed to play crew member Janice Rand, but was written out of the series after just eight appearances in season one. Since then four different reasons for this happening have emerged. Roddenberry said it was a simple budget issue. Others claimed her ‘love interest’ role opposite Captain Kirk became impractical. Grace’s issues with her growing alcoholism was mooted as cause for her exit. The lady herself believed that she was removed in order to keep her quiet about being sexually assaulted by a network executive. Take your pick.