In 1971, twenty-seven year old George Lucas directed his first full-length film, a sci-fi feature called THX 1138. It cost around three quarters of a million dollars to make and grossed about three times its expenses in the USA. It was successful enough for him to seek backing for his next venture, American Graffiti, but studio after studio would not touch it. The screenplay told four stories simultaneously, something that was completely knew at that time. In fact, none of the studios even thought this avant garde approach to movie-making was even possible. Today, of course, this method is commonplace on both TV and movies. Eventually, Universal gave him a lousy $750,000 budget to work with, provided he could get himself a name producer. He showed his script to his pal Francis Ford Coppola who had just completed shooting The Godfather and was the talk of the town. Coppola said ‘yes’ at once and the project was underway. All filming was to be done between the hours of 9 pm and 6 am, and a studio executive would be on hand each day to turn off the generators at six on the dot each morning. Indeed, the budget was so tight that one of the stars, Cindy Williams, later of Laverne and Shirley fame, recalled there was no make-up used on the set (other than the girls’ own pancake make-up that is) because the budget simply couldn’t afford it!

George Lucas on the set

Lucas was at the van of the New Hollywood breed; directors intent on bypassing the Old Hollywood system and obtaining their own backing, setting up their own independent packaging for their projects. He, Coppola, Steven Spielberg, John Carpenter, Robert Zemeckis and a few others were about to change the face of Hollywood forever. American Graffiti would lead the way. It would be set in the Californian town of Modesto; a salute to rock and roll music and George’s own recollections of his youth growing up in Modesto in 1962, when young guys cruised up and down main-street in their souped-up hotrods, ‘checking out the chicks’ and dreaming of romance. The picture focuses on the night that a couple of the town’s boys are preparing to leave their small-town High School for college and the world outside. Unfortunately, the real Modesto had outgrown the era of the film so it had to be shot mostly in the small town of Petaluma. 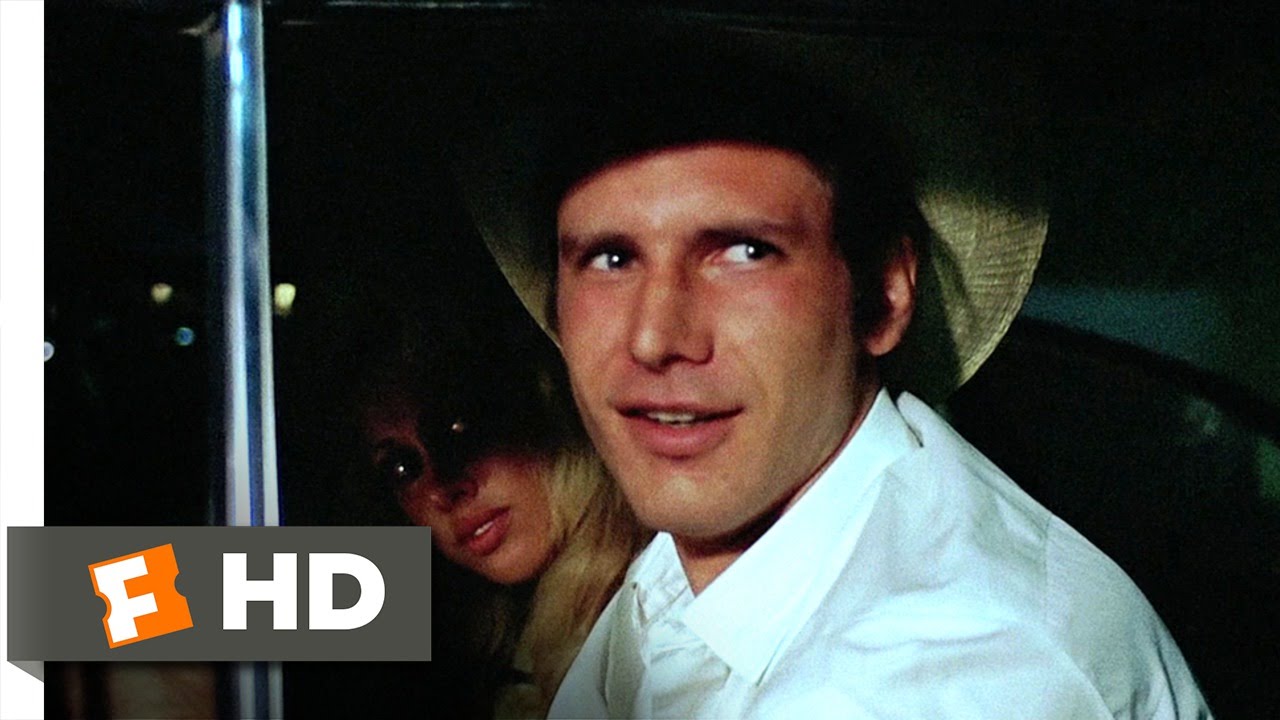 There were four main male characters which were filled by up and coming New Yorker Richard Dreyfuss, former child star (and future A-Grade director) Ron Howard, one-time professional boxer Paul Le Mat, and Charles Martin Smith who landed the part of ‘Terry the Toad’. A fifth but smaller role was the showy part of Bob Falfa, the out of town hot-rodder bent on challenging Le Mat’s character to a race. Twenty-nine year old struggling actor Harrison Ford was a surprising casting by Lucas. Even more surprising is Ford’s holding out for a pay rise. Lucas’s budget only enabled him to offer $485 a week, but Harrison dug in his heels and eventually got an extra fifteen dollars a week to $500. It was all about respect, he said later. Only Howard and Martin Smith were teenagers (both were 18 when filming started). Cindy Williams who played Howard’s girlfriend is seven years older than him, which makes a pleasant change from the usual Hollywood scenario of old men romancing young girls. Ford actually turned 30 during the shoot.

Cindy as Shirley with Penny Marshall as Laverne

There were three featured female characters in the script (Laurie, Debbie and Carol), and these went respectively to the aforementioned Cindy Williams, Candy Clark, and 12 year-old Mackenzie Phillips who was the daughter of Michelle and John Phillips of The Mamas and the Papas pop group. Candy and Mackenzie would become lifelong friends after meeting on the set of this movie. Between 1975 and 1977 Candy lived with Jeff Bridges before they went their separate ways.

Young Mackenzie was terrific in the picture. In one scene in which she and Le Mat are sitting in his car at the lights, a car full of girls rolls up alongside them and one of the occupants throws a balloon full of water at her window. It was supposed to burst on the side window, drench her character and get her good and mad, but instead it hit Mackenzie full in the face. She burst out laughing, ad-libbed, and the cameras continued to roll. It was left in the completed film. 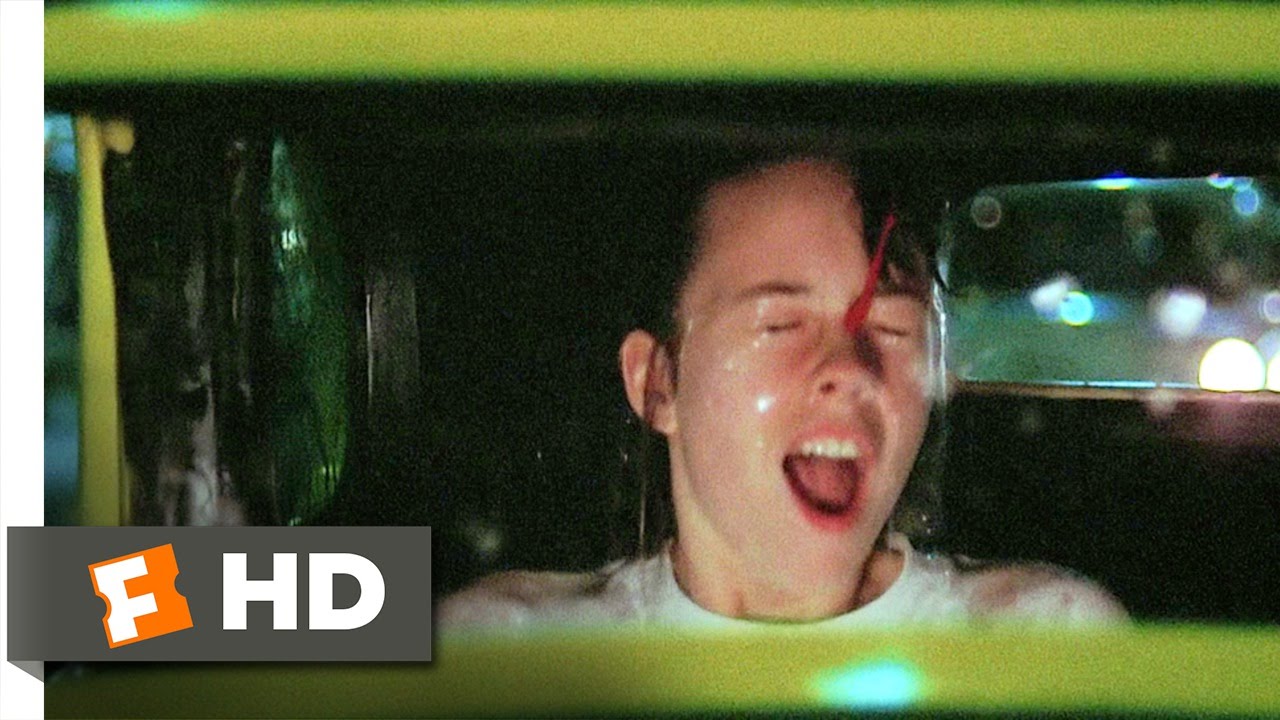 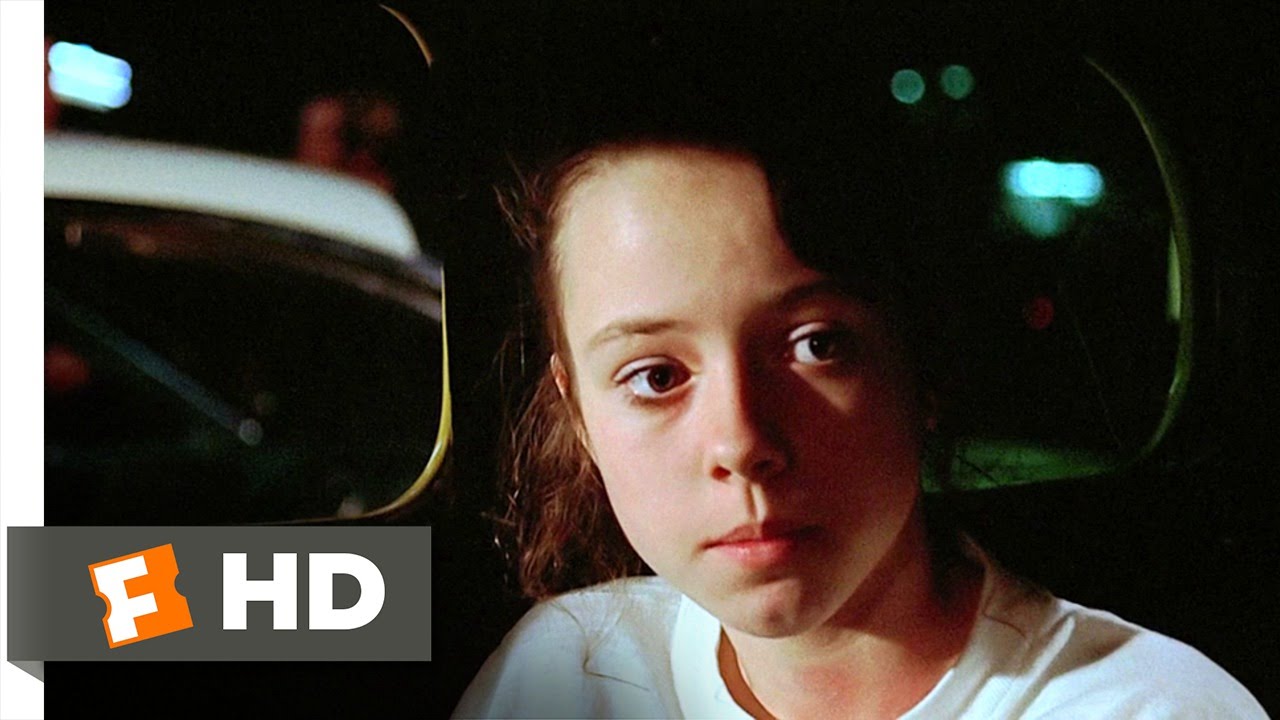 Speaking of the wonderful cars featured in this history-making movie, it is extraordinary to learn that they were all put up for sale. Only Ron Howard’s ’58 Impala sold, and for only a few hundred dollars at that. The yellow Deuce Coupe and the T-Bird went unsold despite being priced at just $3,000 apiece. One can only guess at the kind of price each would fetch today. Harrison Ford’s character drove a Chevy Impala and nobody wanted to buy that either.

Because all filming on American Graffiti was done at night, there was an awful lot of spare time during the day for cast and crew to get into mischief. Paul Le Mot and Harrison Ford became drinking buddies and tended to run amok most days, racing their cars up and down main-street and urinating in the hotel’s drinks machine! Someone even attempted to set fire to Lucas’s room. Cindy claims it was Ford. Candy Clark recalled, ‘Harrison and Paul were pretty wild, they were drinking a lot of beer in those days. I found them very intimidating, like Hell’s Angels types. Harrison was really intimidating. He had quite a glare at that time.’ Cindy was less intimidated. She had met Harrison years before and liked him. ‘Every day we would arrive and someone would say: ’Have you heard what’s happened now?’

Richard Dreyfuss was understandably far more serious in his approach to the picture. After all, he was pretty much the star and his performance could very well make or break his career. It was only a matter of time before he came into confrontation with the wild guys. Paul admitted tossing Richard in the shallow end of the pool where he struck his head on the bottom causing a rather nasty bump. Le Mat jumped in and hauled him out, aware the jest had gone a bit too far. Bo Hopkins who played the leader of the Pharaohs was often involved in the drunken antics as well. 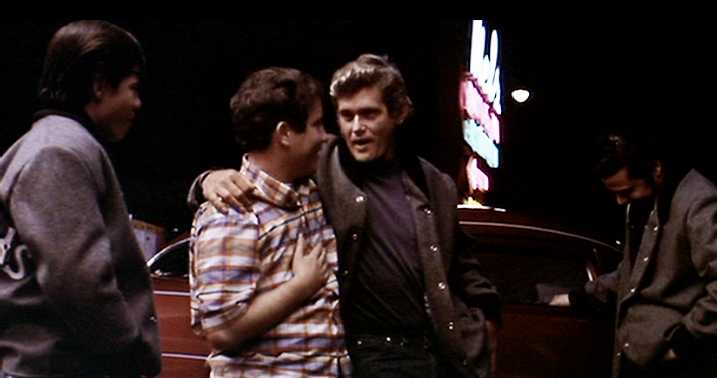 The erratic behavior reached its climax when the management of the Holiday Inn barred Ford from staying there and he was segregated from the rest of the cast at the Howard Johnson. According to Candy Clark the final straw came when, ‘they were crashing beer bottles from their balcony into the car park’. One went through the windscreen of a Cadillac. Lucas seemed prepared to waive their conduct, but the Holiday Inn people were not. Ford was philosophical about it all: ‘I was a bit of a carouser in those days’, he admitted. ‘And I was in the company of other hell-raisers. If I’d been in the company of priests I would have behaved differently.’ 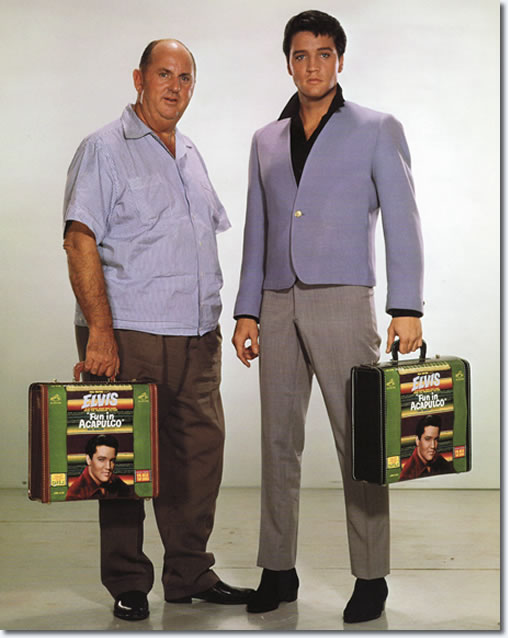 Lucas initially wanted bits and pieces of around 80 rock and roll tracks from the 50s and 60s in his picture, but the budget simply did not allow for that. All 30 or so of the Elvis Presley songs he wanted were the first to go, Presley’s manager Colonel Tom Parker simply wanted far too much for them. As it was the 40 or so songs used cost around $2,000 each, nothing by today’s standards, but quite a slice out of George’s tight budget. Lucas was also unable to pay all the crew, so he offered many of them screen credits in lieu of payment, and most accepted his proposal. In those days only department heads received screen credits. Today everybody gets a mention, hence the reason why credits now roll on for an eternity.

The premiere took place in the Northpoint Theatre in San Francisco on a Sunday morning and the young audience gave it a rousing sign of approval, but Universal head Ned Tanen declared the picture ‘un-releasable’, a response that so enraged Francis Ford Coppola that he offered to buy it on the spot. Eventually, Universal and Lucas reached a compromise (that George hated), whereby the studio could ‘suggest’ modifications to the final print, effectively taking control of the product out of his hands. Three scenes were cut from the 1973 release on Universal’s insistence. Once Lucas had the clout after Star Wars: Episode Four – A New Hope (1977) became a sensation, he had all three reinserted in the 1978 re-release of American Graffiti. It has since been estimated that for an initial cost of $777,000 this remarkable movie has grossed in excess of $200 million at the box-office and in home video and DVD sales – not counting merchandising! And that was small potatoes when compared to George’s next venture – the Star Wars franchise. No wonder the guy has clout.