I doubt very much if there has ever been a more popular courtroom drama series than the legendary CBS show starring Raymond Burr called Perry Mason. It was shot at 20th Century Fox’s studio and ran for a total of 271 episodes between September 1957 and May 1966. The strangest thing about the success of the series must surely be the fact that every one of the episodes followed precisely the same formula. Audiences spent the first half-hour of each programme being introduced to the prospective murder victim, then to Perry’s client who is suspected of perpetrating the dastardly deed, and then to the deed itself. In the second half-hour Perry goes head to head with his legal adversary Hamilton Burger, the Los Angeles District Attorney, but not always in an actual trial. As often as not Perry extracts a confession out of a suspect he has tricked during the preliminary hearing, after which the characters enjoy a brief get together to discuss just how they had managed to expose the killer. Perry about to gain another confession

The author of the Perry Mason novels, Erle Stanley Gardner, was a man devoted to the law and its intricacies. He had no interest, whatsoever, in the private life of his hero – so the entire series ploughed on without any love affairs (not even an inferred one) between any of the stars. It was law, law, law all the way – a murder, a client, an arrest, a hearing or trial, and a confession. And TV fans lapped it up all around the world for almost a decade. Many of the episodes drew on plots and characters from Gardner’s 69 Mason novels, but nowhere near all of them. By 1958 a team of writers were working on creating episodes built around his book characters, his novels’ plots by then exhausted. ‘Funny thing about writers’, recalled producer Gail Patrick. ‘A lot of them think they’ll improve on Erle. Most of them find out they can’t even duplicate him.’ Even so, Gardner would be sent the revised scripts and he would carefully check them for dubious points of law. An awful lot of lawyers and judges watched the show.

The search for an actor to play the title character was a tricky one. ‘We couldn’t afford a big star’, recalled Patrick. Yet a ‘big’ star would be whom they ended up with. After seriously considering William Holden, Mike Connors, Richard Carlson, Richard Egan, Efrem Zimbalist, Jr and Fred MacMurray, the producers came back to an actor they had tested in April 1956 for the Hamilton Burger role, a man-mountain named Raymond Burr. His courtroom performance in the 1951 drama A Place in the Sun had impressed them, but for Burr to become a TV star he was going to have to lose weight – about sixty pounds! So, he went on a crash diet and was rewarded with the lead in Perry Mason.

Among the hundreds who had auditioned for the role was William Hopper, the only son of the all-powerful gossip columnist Hedda Hopper. Studio blurb stated that he was a Frogman during the Second World War, stationed in the Pacific, and that his dark blonde hair turned white from the stress he was under on highly dangerous operations. As far as I am aware, however, there is no medical reason why one’s hair should turn white because of fear or stress. Coincidentally, his father was theatrical producer DeWolf Hopper who married Gail Patrick in 1936, the eventual executive-producer of Perry Mason. Hedda and Gail did not like each other. Hopper was surprisingly effective as Mason’s private investigator, occasionally providing the series’ only light relief. Lucille Ball’s biographer, Jim Brochu, wrote (in 1988-9) of a visit Lucy received from her friend Hedda Hopper, during which a tearful Hedda presumably told her that William’s marriage had collapsed because he had fallen in love with a man, ‘…one of the biggest stars on television at the time’, she said. ‘I won’t tell you who it is’, said Lucy, ‘because he’s still one of the biggest stars on TV. Anyway, it broke Hedda’s heart. The fellow loved Bill very much, and I understood their relationship lasted until Bill died.’ I have not seen anything else to corroborate this, only Lucille Ball’s statement to Brochu.

Raymond Burr’s homosexuality, on the other hand, is simply a matter of fact. Of all the TV heart-throbs bobbing about in the fifties and sixties he must surely take the mantle as the least likely. Throughout his long film career he invariably played bad guys, ‘heavies’ in the true sense of the word, for he truly was quite enormous. Until he became Perry Mason he was probably the least attractive actor in Hollywood, a kind of serious Fatty Arbuckle. Add to that the fact that he far preferred intimacy with men over women, a less likely sex symbol is hard to envision. Yet female fans around the globe, especially middle-aged and elderly ones, drooled over him. He became quite a phenomenon. A Canadian by birth, he began his acting career in 1943. Any personal details about his life from that point onwards should be viewed with extreme scepticism, for Raymond, it has to be said, told some very big fibs. At the height of his popularity the studio ran stories about his being married three times, widowed twice and divorced once, yet nobody in his family ever met any of these ladies. In fact, they did not exist. In 1963 he secretly wed his lover of many years, Robert Benevides, at their ranch in California. When Burr passed away in 1993 from liver cancer he left his entire $32 million estate to his partner Mr. Benevides.

William Talman was the fine actor chosen to play District Attorney Hamilton Burger. A chain-smoker, he would succumb to lung cancer at 53, but not before he became the first actor to appear in an anti-smoking TV commercial, even before the famous Yul Brynner ad. Playing opposite Raymond Burr was the highlight of his career, but Talman himself was particularly proud of his chilling performance as the escaped serial-killer Emmett Meyers in The Hitch-Hiker in 1953. He was stopped at a red light one day in his convertible when another man in a convertible glanced across and recognized him. ‘You’re the hitch-hiker, right?’ asked the man. Talman nodded, whereupon the man leapt from his car and slapped the astonished actor’s face. ‘You know’, he said later, ‘I never won an Academy Award but I guess that was about as close as I ever will come to one.’ In 1957, he attended a wild party in Hollywood that involved a lot of nakedness. Along with several others Talman was arrested, prompting CBS to invoke a morality clause and fire him from Perry Mason. Cast and crew, plus an overwhelming response from the public, had him re-instated, but the scandal pretty much ended his movie career.

Finally, there were two other members of the cast who deserve mention. The first is Barbara Hale, the attractive brunette who played Della Street. Millions of fans who watched the show regularly kept waiting for even a glimpse of a romance between Della and Perry, but alas, it was never to be. If you are ever in the Dr Pepper Museum in Dublin, Texas, you might notice her picture there. Barbara was one of the original ‘Dr Pepper’ girls in the soda company’s promotions in the 1940s. She was also possessed of an earth-shattering scream known throughout the movie industry! According to Burr, ‘She has the best shriek in Hollywood’. Barbara was born in 1922 and is still living, having just celebrated her 94th birthday. Not so the final ‘regular’ in Perry Mason, the highly respected Ray Collins who portrayed Lieutenant Arthur Tragg, Burger’s ‘off-sider’. He was already 68 years old when the series began, which probably made him the oldest active Lieutenant in police history, but he played the part well and his age was kind of ‘brushed over’. He made his stage debut in 1903 in Vancouver and later worked with Orson Welles as part of the Mercury Theatre ensemble in the mid-thirties. Orson described him as, ‘the finest actor I’ve ever worked with’. In fact, Collins played no fewer than three roles in Welles’ ‘The War of the Worlds’ broadcast of 1938, the notorious ‘night that panicked America’. Collins became very ill in 1964 and within a year was unable to continue to play Tragg. Raymond Burr and others insisted his name should still appear in the credits, so that he would feel his spot remained open for him should he recover. Sadly, everyone knew that would never be, and he passed away from emphysema in 1965. The series folded a year later. 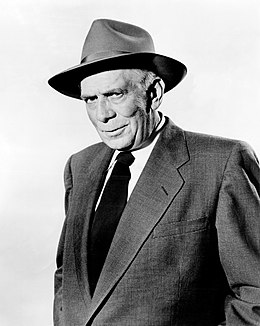