Television first reared its ugly head in my hometown of Fremantle, Western Australia on 16 October 1959. By then the quite brilliant comedy series The Honeymooners had come and gone in the USA. TV viewers in WA were probably unaware of that, however, and the show was an immediate monster hit. And it deserved to be. It featured two superb male leads, Jackie Gleason as Ralph Kramden and Art Carney as his neighbour Edward Lilywhite Norton. Ralph was a bus driver and Norton worked underground in the local sewer, would you believe? And they were simply hilarious. Kids at my school (I was about 12 then) were forever using catchphrases from the show – ‘To the moon, Alice!’ Bang – zoom!’ ‘Hey there Ralphie boy’, ‘Humna…humna…humna…’ ‘Pow, right in the kisser!’ By the way, the ‘bang – zoom!’ line was never scripted. Gleason tossed it in whenever he felt he should. Gleason and Carney were clearly the stars, but the writers were wily enough to cater to the women of America too. The mid-fifties were still very much male-dominated, but a decade after the end of World War Two women were gradually making inroads into that dominance. The writers, Leonard Stern and Sydney Zelinka, cleverly captured the hearts and minds of most American women by supplying Ralph’s wife Alice, (played superbly by Audrey Meadows), with an endless string of one-line put-downs that stopped her husband dead in his tracks. I lived with my grandparents at the time and my grandmother absolutely adored Audrey Meadows. Incidentally, Audrey proved to be a whole lot smarter off-screen than everyone else in the series as well. Her shrewd manager predicted the show might one day be re-run, so he had her insist that a clause be inserted in her contract stipulating that she would be paid royalties if it ever appeared anywhere else in the future. She was the first TV performer to get residuals, and she continued to get them until the day she died. Perhaps, her manager deserves most of the credit, but Audrey was wise enough to latch onto his advice. Today, of course, everybody gets residuals; writers, directors, voice actors included. 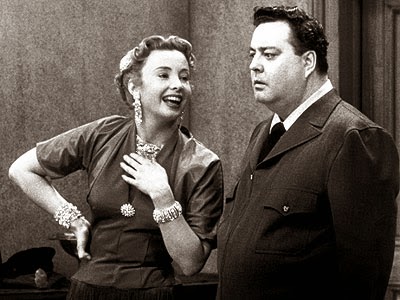 Alice on top, as usual.

Actually, Audrey landed the role by default. Originally, an actress named Pert Kelton played Alice on The Jackie Gleason Show (1950-52) in several 10-15 minute sketches several years before The Honeymooners eventuated. By all accounts she was very good too. Unfortunately for Pert, however, her husband Ralph Bell was blacklisted as a Communist during the McCarthy witch-hunts and her career went down the drain by association. Audrey was asked to suggest a few names as the girl’s replacement. She coyly offered the names of actresses she almost certainly knew were unavailable for one reason or another – and then finally suggested herself. Gleason had the final say, however, and he quickly rejected her – ‘because she is too pretty’, he said. Audrey soon fixed that. She had photographs taken of her without make-up, her hair up and scraggy, wearing a torn apron and blouse. She got someone to show them to Jackie and he approved, astonished to later find she was the same actress he had refused the day before. ‘Any dame with a sense of humour like that deserves the job’, he exclaimed. ‘Hire her!’ Female viewers strongly identified with her character, and she was forever being sent household items to help ‘improve her life’. The series was filmed before a ‘live’ audience and edited later. If you see Gleason pat his stomach in an episode it was his signal to aides that he had forgotten his line. All episodes were shot, not in a studio, but at the Adelphi Theatre which held about 1,400 patrons. The apartment in which Ralph and Alice live was designed to look like a replica of the apartment in which Gleason grew up in Brooklyn. The building still stands today. Jackie refused for over 30 years to work again with Carney after THe Honeymooners wound up. Even when Steven Spielberg asked them to appear in a scene together (atop a Ferris wheel in fact) in his 1979 film 1941, Gleason flatly refused. It took until 1985, in a film called Izzy & Moe, shot just two years before Jackie died, before the two iconic comedians agreed to act together again. They shared the billing. 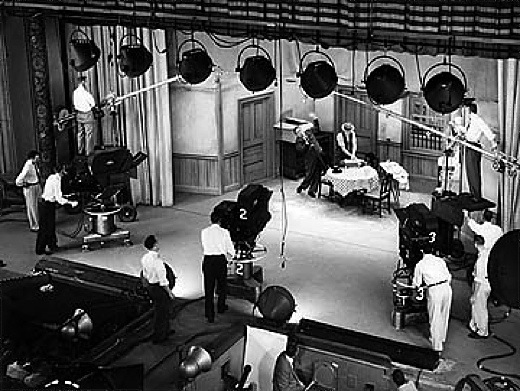 Shooting at the Adelphi Theatre

Gleason grew up in grinding poverty. Older brother Clemence passed away when Jackie was three, probably from tuberculosis. The boys’ father was a drunkard who ran out on his family before Jackie’s tenth birthday. His mother died in 1935 when Jackie was 19. In the 1930s young Gleason worked as a bartender at a place called the Blue Mirror in Newark, New Jersey, where his antics entertained patrons enough for the proprietor to give him a shot in front of a microphone. His career kicked off from there. Across the street from the Blue Mirror was a pool hall which Jackie patronized every afternoon. When he portrayed pool shark Minnesota Fats in The Hustler (1961) he did all his own playing. Jackie was one hell of a pool player. He also possessed an ego the size of the pyramids. ‘I have no use for humility’, he delighted in telling colleagues and anyone else who would listen. ‘I am a fellow with an exceptional talent.’

Jackie & Paul Newman in The Hustler

Given Gleason’s enormous ego, it is surprising to find that he once stated that 90% of The Honeymooners’ success could be attributed to Art Carney. Perhaps, it was his ego that could not allow him to work with the man again. One wonders how he felt when Carney (as Norton) won an Emmy for Best Actor in 1956, especially since he defeated Jackie who was also nominated. Oddly, the character of Norton was far removed from that of the actor Art Carney. ‘I love Ed Norton and what he did for my career’, he said. ‘But the truth is we couldn’t have been more different. Norton was the total extrovert, there was no way you could put down his infectious good humour. Me? I’m a loner and a worrier. I don’t tell jokes, and if I tried, I couldn’t hold an audience’s attention for five minutes.’ During an interview with columnist Earl Wilson he summed up his feelings succinctly. ‘I’m trying to change my image. You don’t like going through life with your name synonymous with sewers.’ Audrey Meadows will always be remembered as Alice Kramden by those of us old enough to recall with fondness this remarkable series. Her one-liners were wonderful and delivered with superb timing.  One she used more than once was her response to portly Ralph’s regular comment that he was ‘looking for his pot of gold’. ‘Go for the gold, Ralph’, she would tell him. ‘You’ve already got the pot!’ Surprisingly, despite her ‘native’ Brooklyn accent, she lived the first five years of her life with her parents in China. They were missionaries there. Both Audrey and her sister, actress Jayne Meadows, spoke only Mandarin before the family moved back to the United States. They were vivacious redheads, both extremely witty and likeable. Jayne would go on to wed the equally witty comedian Steve Allen. Audrey would be Alice Kramden – forever.

The fourth member of the cast was Joyce Randolph who played Norton’s wife Trixie. Joyce and Audrey had very similar personalities, which enabled audiences to readily believe that Trixie and Alice were bosom buddies. In real life the two actresses knew each other from their early stage days. Approaching 93 years of age in 2016, Joyce is the last survivor of the four stars of The Honeymooners. Gleason died in 1987, Audrey in 1996, and Carney in 2003. Throughout the series Audrey was compelled to wear ‘flats’ to disguise her height. Gleason was a short man with a Napoleon complex, so he always hired short actors to play opposite him. At 5’6” Audrey created a problem for him, hence the ‘flats’. Even so, she always said he was a delight to work with – a comic genius. ‘I’ve never been in a show that had the chemistry of everybody together like that’, she said. ‘We were all very close.’ Remarkably, Gleason never rehearsed. He felt it detracted from the spontaneity of his humour. The rest of the cast attended rehearsals without him.

The series only lasted a solitary season before Gleason himself walked away from it. He told the press that he did not believe the script quality could be maintained beyond that. Years later, when he learned that the animated character of Fred Flintstone was based on him, he seriously considered suing the makers of The Flintstones, but friends talked him out of it. Wisely, they convinced him that it would be a career disaster if he became known as ‘the man who killed Fred Flintstone’.