Emma Thompson is a Londoner born into a family of actors in 1959, hence she developed a strong, witty personality, no doubt honed around the kitchen and dining table at home while growing up. Studying English literature at Cambridge University, and becoming part of its Footlights Group, where most of the Monty Python Group once got their starts, sharpened her wits and her performing abilities even further. There she befriended and performed alongside the likes of Stephen Fry and Hugh Laurie. ‘When I was at Cambridge’, she recalled, ‘I shaved my head and wore baggy clothes. What I did was to desexualise myself. It was partly to do with the feminism of that time; militant and grungy. That’s all changed now, though I don’t think it is liberating to get your tits out. I don’t hold with that.’ In 1978 she began a relationship with fellow Footlights colleague Hugh Laurie which lasted for about four years. He would go on to enjoy great success on both big and small screen culminating in his eight year stint starring as Dr Gregory House in the hit TV series House (2004-12). Emma and Hugh remain firm friends today, often working together. 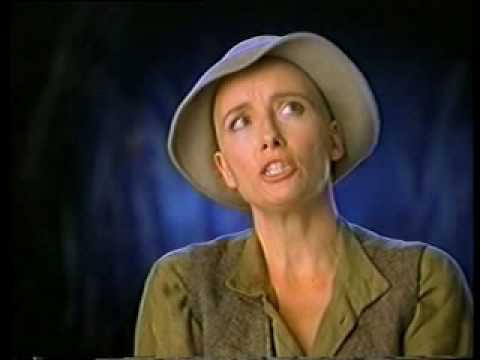 After graduating in 1980, Emma soon gained work on BBC radio and touring with comedy groups. In 1983 she broke into UK television, writing and performing for the comedy skit show Alfresco, teaming up again with Fry and Laurie, and occasionally with Robbie Coltrane (Hagrid of the Harry Potter franchise). A stint on London’s West End led her to being chosen for the lead in the BBC’s 1987 mini-series Fortunes of War, her performance earning her a BAFTA. On a personal level she fell in love with her co-star Kenneth Branagh whom she wed in 1989. They formed their own production company, both starring in several well-received films that resulted in success on both sides of the Atlantic. Howard’s End (1992) gave Emma her second BAFTA and her first Oscar. Coltrane, Fry and Laurie at rear

In 1994 the marriage to Branagh ended. The press were told that their work schedules were the cause of the break-up, but it later emerged that her husband had fallen in love with actress Helena Bonham-Carter. That relationship continued for another five years until they too broke up, without ever marrying, in 1999. Emma lived alone after the collapse of her marriage and slipped into clinical depression. In 1995, however, she scored a resounding success portraying Elinor Dashwood in Ang Lee’s Sense and Sensibility, a film based on Jane Austen’s famous novel. Although unsuccessfully nominated for an acting Oscar for the third time in a row (the previous two being for In the Name of the Father and The Remains of the Day, both in 1993), she picked up her second statuette for writing the Sense and Sensibility screenplay. During the shooting of the film she and actor Greg Wise, (he played John Willoughby), commenced a relationship that eventually led to marriage in 2003. They have two children. Emma had suffered two miscarriages already, one to Branagh and one to Wise, before she and Greg used IVF to conceive their daughter Gaia. Their adopted son Tindy was a former Rwandan child-soldier whose parents had died in the genocide. Emma and Greg adopted him when he was sixteen and he became a British citizen in 2009. A long-time friend of Hugh Grant, Emma has played opposite him in two acclaimed productions, once as his lover in Sense and Sensibility; the other as his sister in Love Actually in 2003. Both actors share a great sense of humour and seem more than happy to poke fun at themselves in public. Indeed, both are fearless self-satirists, an admirable quality not often seen in actors with high profiles. Actor Bradley Whitford recounted (on The Queen Latifah Show in February 2014) how Emma surprised the cast with a prank during the shooting of the film Saving Mr. Banks (2013). While a scene was being filmed that did not require Emma, she quietly slipped away, changed out of her costume and into a bathrobe, then re-appeared while Whitford was attempting to sing ‘Let’s Go Fly a Kite’. In mid-song she suddenly opened her robe to reveal she was naked from the waist upwards, except for a couple of ‘Mickey Mouse pasties’ covering her nipples! Emma herself confirmed the accuracy of the story on The Graham Norton Show recently. Like most actors she has turned down some plum roles over her career. One was the lead in Basic Instinct (1992). In fact, she was actually cast, but later had a change of heart. Never one to mince words, she said of her replacement Sharon Stone: ‘As far as I can see, from Sharon Stone’s love scene, they moulded her body out of tough Plasticine. She was shagging Michael Douglas like a donkey, and not an inch moved. If that had been me, there would have been things flying around hitting me in the eye.’ She also turned down the role of Anna in Anna and the King, which ultimately went to Jodie Foster. In what has to be a unique situation, she was compelled to turn down the chance to play God in Kevin Smith’s Dogma in 1999 – because she was pregnant.

Speaking of God, Emma publicly states that she is an atheist. ‘I regard religion with fear and suspicion’, she says. ‘It’s not enough to say that I don’t believe in God. I actually regard the system as distressing: I am offended by some of the things said in the Bible and the Qur’an and I refute them.’ She is also particularly involved in human rights activities and is an outspoken activist for Palestinians, having been a member of the British-based coalition called ENOUGH! Its rather forlorn aim is to ‘end the Israeli occupation of the Gaza Strip and the West Bank’. In 2009 Time named her a ‘European Hero’, in recognition of ‘her work to highlight the plight of AIDS sufferers in Africa.’ She is also an active environmentalist and a supporter of Greenpeace. This year (2016) she has already lent her support to the Women’s Equality Party, stating, ‘I really do not want to die before closing the pay gap, which stands, in our great and supposedly modern capital city, at 23%’. Emma Thompson is an outspoken, courageous woman of many parts, one prepared and determined to make a difference if she can. Yet that does not always please everyone. In 2010, The Daily Telegraph asked the question: ‘Emma Thompson: A national treasure or Britain’s most annoying woman?’ Her response is typical of the lady’s assertiveness. ‘What I feel is that we all need to speak up and a woman who has got a louder voice needs to shout very loudly indeed.’ The world needs more Emma Thompsons.