Marilyn met actor John Carroll and his wife Lucille Ryman in December 1947. Lucille was a talent scout for MGM. The three hit it off right away and their friendship resulted in Marilyn moving into their home for a while. Lucille even got her to sign a contract with the Carrolls which saw them financing her acting and singing lessons. John and Lucille had an ‘open marriage’, each free to pursue other partners. John immediately seduced Marilyn (she was more than willing), and the relationship became serious enough for Lucille to order her husband to desist, and Marilyn to leave their home. She moved back to the Studio Club for a few months. In 1948, probably because Joe Schenck asked Harry Cohn to give his ‘squeeze’ a job, Columbia Pictures signed the untried Marilyn to a six-month contract and shoved her into a B-feature called Ladies of the Chorus in which she sang three numbers, none of which were memorable. She began using the name Marilyn Monroe as early as 1946, but did not legally change from Norma Jeane Mortenson until 1956! Her love life in 1948 was considerably more impressive than her screen credits, if we can rate quantity over quality. Columbia had already handed her over to voice coach Natasha Lytess who was soon her lover and confidante, but there were quite a few men happy to ‘date’ the voluptuous young starlet as well. The first of these was the musical director at Columbia, Fred Karger. Like Natasha, he was a German-American; like Natasha he was a voice coach who worked with the young recruit; and like Natasha he found time to sleep with Marilyn. Years later she would tell her biographer Maurice Zolotow, ‘Isn’t it sad that I loved Freddy and he didn’t love me, and here’s Johnny [Hyde] in love with me and I didn’t return his love?’ Karger would go on to marry actress Jane Wyman. Speaking of Jane Wyman, another of her husbands the future US President Ronnie Reagan, added Marilyn’s scalp to his already over-crowded belt that year. Whilst still married to Miss Wyman (although the marriage was in its death throes) he found solace in the beds of Patricia Neal and Ann Sothern as well. And that was just in 1948. Ronnie liked the ladies. Come to think of it, what American President didn’t? Jimmy Carter and Obama spring to mind, but not many others. Ronnie was rumored to be cheating on the First Lady on occasion, but she was well aware of his roving eye. At least, unlike JFK, he was pretty discreet about it. Author and journalist James Bacon (he wrote Jackie Gleason’s biography) had an intimate relationship with Marilyn for a few months in 1948, and was more than willing to discuss their romance. He also liked to write about it in his historical accounts of his years in Hollywood as a part-time actor in movies and on television. Bacon would outlive her by nearly 50 years. Another lucky player was the man known as ‘The Toastmaster General of the United States’, a part-time actor, songwriter and comedian, (and full-time jerk) named George Jessel. He managed to interrupt his decade-long relationship with actress Abigail Adams long enough to score with Marilyn. I wrote about his treatment of Miss Adams in an earlier article, and his seeming indifference when learning of her suicide. Inexplicably, he compiled a string of conquests as long as your arm during his life. He dated several iconic movie sex symbols besides Marilyn, among them Rita Hayworth, Jayne Mansfield, Greer Garson and Angie Dickinson. Pocket dynamo Mickey Rooney scored with MM as well. The picture below of Mickey and Marilyn holding hands was taken at the 1948 premiere of The Emperor Waltz. TV pioneer Milton Berle was probably the most popular entertainer on American television in the fifties. Known throughout the land as ‘Uncle Miltie’ or ‘Mr. Television’, the public was blissfully unaware of his reputation as a womanizer. Although about as attractive as an army mule, he happened to be the possessor of an enormous appendage that certain women found irresistible. In his dotage, according to several writers, he had a nasty habit of exposing himself to young women in restaurants and elevators, and was most fortunate not to be arrested and charged. One of his biographers concluded that Berle’s fame and age got him off the hook at least twice. In his younger, highly successful years, however, he did not need to advertise his wares, hence his catalogue of conquests. It included Lana Turner, Ann Miller, Linda Darnell, Ann Sheridan, Veronica Lake, Hedy Lamarr, Betty Hutton, Pola Negri, Theda Bara and Nancy Davis (Reagan). In 1948 he added Marilyn to the list and they remained ‘friends’ until her death in 1962. Dean Martin was another lover who stayed close to her long after they first hooked up pre-1950. Berle and Marilyn at Jackie Gleason’s 1955 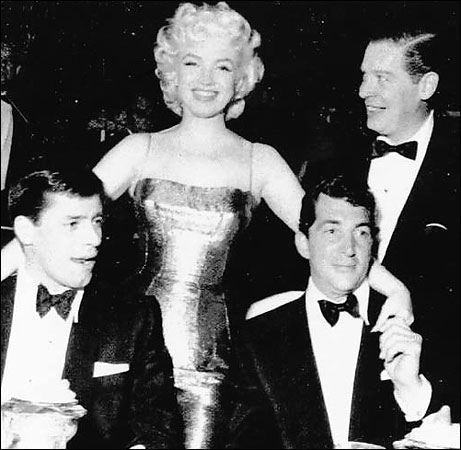 By far the most important man in Marilyn’s life while she was struggling to get noticed as an actress was her Russian-American agent Johnny Hyde. He was thirty-one years her senior (and married) when he met her, probably in 1948. She was still Norma Jean Mortenson then, but Johnny would soon address that when he became her agent. He observed her being photographed by legendary portrait photographer Bruno Bernard at the Racquet Club in Palm Springs, California, and he liked what he saw. In fact, he loved what he saw. He took her on as his client and even paid for some minor plastic surgery. Before long they were lovers and the smitten Johnny asking her to marry him – if he could obtain a divorce. Marilyn admitted she loved him, but was not in love with him. He eventually left his wife for her anyway, but he and Marilyn never married. It was not part of her overall plan. Johnny treated her decently and respectfully, nevertheless, and in return, as was often her way, she repaid him with sex. Throughout her life Marilyn used sex to a) get what she wanted, and b) as payment for kindnesses. It meant nothing to her either way, but she knew how much it meant to the men in her life.

with her agent and lover Johnny Hyde 1948

Dancing with the diminutive Johnny

Hyde was once the Vice-President of the William Morris Agency’s West Coast office during the 30’s and 40’s, so he knew just about everybody who was anybody in Hollywood. He still had considerable clout in the industry. And people owed him favors from way back. He used his influence to get her the role of Angela in The Asphalt Jungle (1950), plus that of Miss Caswell in All about Eve in the same year. These were the roles that audiences first noticed Marilyn on the screen, and they brought her a second stint with 20th Century Fox – this time a seven-year contract. She was on her way, but Johnny Hyde would not be there to share her success. On 18 December 1950 he collapsed. A few weeks later his heart gave out and he died.

In a scene from The Asphalt Jungle

It is impossible to underestimate the importance of Johnny Hyde in Marilyn’s life. His former clients, Rita Hayworth, Lana Turner and Al Jolson, not only made him a very youthful millionaire, but they provided living proof to the studio moguls that he had a hell of a track record of proven winners at the box-office. So, when he ceaselessly promoted Marilyn at meetings, parties, on sets or around swimming pools, the fat cats he talked to took notice. If Johnny said she was going to be a star – then, perhaps, she was. So they gave her a try. But there was a fly in the ointment. Johnny and Natasha Lytess positively detested each other. When he left his wife and got Marilyn to move in with him Natasha was furious. Her aim was to turn Marilyn into a dramatic actress. Johnny’s aim was to set her up as a glamour queen, a sex siren; an empty-headed dumb blonde.

A slight bump of cartilage was removed from the tip of Marilyn’s nose in 1949, and crescent-shaped silicon prosthesis was inserted into her jaw beneath the lower gum. Johnny covered the costs. He also wanted her to have a fallopian tubes operation to prevent pregnancy, but Marilyn never did have it done. Nor did she ever have an abortion during her lifetime, although a number of writers have written that she had several. Her gynecologist Dr Leon Krohn was emphatic that this was not the case. Then again, the notes on her medical history remain closed – probably forever – so the entire truth might never be known.

‘Johnny inspired me to read good books, to enjoy good music, and he started me talking again’, Marilyn revealed years later. ‘I’d figured early in life that if I didn’t talk I couldn’t be blamed for anything.’ By the end of 1950 she had no fewer than six films in release thanks to Johnny’s Herculean efforts to keep her face before the public, but the enormous workload he willingly carried on her behalf had taken a toll on his health. Marilyn knew he had a weak heart. It was one of the reasons why she would not marry him. The main reason, however, was that a husband, especially one so much older than her, would have a detrimental effect on her career. It would label her as a ‘gold-digger’. As Johnny lay dying in hospital, he asked that ‘Marilyn be treated as one of the family’ after he was gone. On his death, however, the Hyde family immediately ordered her out of Johnny’s Palm Springs home. She moved back with Natasha. ‘I knew nobody could help me like Johnny Hyde’, she confided in Natasha, ‘but I felt sorry for him too, and he was crazy about me. I never lied to him, and I didn’t think it was wrong to let him love me the way he did. The sex meant so much to him, but not much to me.’