Howard Hughes was a Texan, a maverick movie tycoon who hit the movie industry like a whirlwind in the Roaring Twenties and remained a force for a couple of decades. At the age of 19 he inherited 75% of his family’s fortune. His father had patented the two-cone roller bit, which allowed rotary drilling for petroleum in previously inaccessible places. Instead of selling it, however, he chose to lease it, founding the Hughes Tool Company, the basis for Howard’s enormous wealth.

In 1925 young Howard married and moved to Los Angeles, intent on becoming a film maker. In 1930 he released a World War One flying epic titled Hell’s Angels. It had taken three years to make. Half-way through production the release of the first ‘talkie’, The Jazz Singer, caused Hughes to switch his movie to sound, which meant ejecting his leading lady Greta Nissen, a Norwegian with a severe accent totally unsuitable to her character, a British aristocrat. Up and coming teenager Jean Harlow, a girl personally chosen by Hughes, replaced her. Every one of Greta’s scenes was then re-shot. Harlow would become a big star in time, but at 18 she knew nothing about acting. Director James Whale closed down the set for three days and gave her personalized instruction and tips. There is a solitary talking scene in Hell’s Angels that features her in color, the only footage ever shot of her that was not in black and white. Stunt pilot-coordinator Paul Mantz considered one particular flying sequence far too dangerous for his team. Hughes, an experienced pilot himself, jumped into the cockpit and flew it instead. He crashed and was badly injured but survived. Three other pilots and a mechanic on the picture were not so lucky. Mantz himself would die flying a stunt in the excellent 1965 drama The Flight of the Phoenix. When he became aware that Darryl Zanuck at Warners was making his own WW1 epic The Dawn Patrol, Hughes sued the company for plagiarism, but lost the case. In all, the flying sequences in Hell’s Angels were excitingly done, but the screenplay and the acting by the three principals was mundane. Nevertheless, the picture made a substantial profit. For the record, Hughes and Harlow were never lovers. In fact, he seriously disliked her. By the time of the picture’s release Hughes was a single man and dating numerous Hollywood stars and starlets. Among his known conquests were Kate Hepburn, Billie Dove, Ava Gardner, Faith Domergue, Ginger Rogers and Bette Davis. Just how far he got with Olivia de Havilland is debatable, although it is now common knowledge that he proposed marriage to her (unsuccessfully), and when rejected made the first of several similar offers to her sister Joan Fontaine, also without success. Gene Tierney also rejected his advances. She knew where his heart lay. ‘I don’t think Howard could love anything that did not have a motor in it’, she told friends. And she was right. Flying and engineering were his life. He and Gene remained good friends, nonetheless, Hughes paying for all medical expenses when she contracted rubella during her pregnancy with daughter Daria. Another one of his protégées, Jane Russell, was a close friend without becoming an intimate one. Over the decades Hughes would woo hundreds of stars and starlets, yet he appeared to be more interested in collecting beautiful women and installing them in apartments so that he could briefly visit them – like so many exotic birds in gilded cages. He had over a hundred expensive apartments, hotel rooms and bungalows to house his ‘girls’. The rent was usually about $175 a week, which he paid of course. There were several strict rules, however, and they had to be followed to the letter. First, the girls were not allowed to go out on dates. Whenever a girl left her apartment one of his 100 detectives would follow her wherever she went – 24 hours a day, seven days a week, no exceptions, not even for huge stars like Ava Gardner. He also had their cars bugged (if they actually owned one). He kept an indexed card system that kept a record of each girl’s vital statistics, especially breast size and periodic cycles, but cards also contained shoe and dress sizes, personal habits, mother’s Christian name, and a record of the times he visited the apartment. He kept a rigid schedule that enabled him to see each one, sometimes for only a few minutes, once a week.

He also employed three Hollywood portrait photographers in a shop on Sunset Boulevard where he installed two-way mirrors in the change-rooms so that he could watch his selected stars and starlets try on skin-tight sweaters. He had a thing about sweaters on girls. If he liked the look of a girl she got a contract with RKO there and then. But mostly he just watched. When Randolph Scott arrived in Hollywood looking for an acting job he became friends with Howard and soon moved in with him. Hughes also took up with Cary Grant. The two men used to cruise the homosexual bars, their favourite being BBB’s Cellar. The gay community was well aware of the relationship between the three men.

In 1936 Howard’s enormous wealth and power helped extricate him from a criminal charge that would have sent a lesser-heeled man to prison. On the night of 11 July 1936 the vehicle he was driving knocked down and killed a man named Gabriel S. Meyer at the corner of Third Street and Lorraine in Los Angeles. An attending doctor at the hospital noted that Hughes had been drinking, and a witness told police that he had seen Hughes’ vehicle driving very fast and erratically when it slammed into Mr. Meyer who had been standing in the safety zone at a streetcar stop. By the time of the coroner’s inquiry, however, the witness had experienced a memory reshuffle, stating that poor Mr. Meyer had actually stepped out in front of Hughes’ car. Howard’s passenger at the time, a girl named Nancy Bayly, confirmed this and the accused walked away scot-free. ‘I was driving slowly’, he told reporters, ‘and a man stepped out of the darkness in front of me’. Actress Jean Peters became his wife in 1957, yet even she was subjected to constant surveillance by his sleuths, both before and after the marriage. Actor Max Showalter appeared with her and Marilyn Monroe in the 1953 hit Niagara and became her good friend. Making the picture required numerous meetings between Max and Jean, all of them strictly professional, yet Hughes’ goons threatened to ruin his career unless he kept away from her. Jean and Howard divorced in 1971, five years before his death from kidney failure. 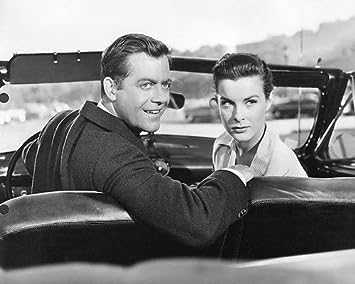 Showalter and Peters in Niagara

By then he was a truly pathetic figure, eating only chocolate bars and chicken, and drinking only milk. He was surrounded by dozens of Kleenex boxes as he sat naked watching television, endlessly stacking and re-arranging them and speaking to no-one. He did not bathe and urinated in bottles and containers. He watched the rather dull movie Ice Station Zebra more than 150 times, evidently obsessed with it; although no-one dared ask him why. He seems to have passed away aboard his private aircraft on April 5 1976, either between the Grand Bahamas and Texas, or between Mexico City and Houston. This is still disputed. Due to his emaciated condition caused by malnutrition and drug use he was almost unrecognizable. A sad end for a man who had so much to offer.