It was November 19, 1981 when 43 year-old actress Natalie Wood lost her life off the coast of Catalina Island in Southern California. There have always been important details missing from the official account of her ‘accidental death’, but it has generally been accepted that she probably slipped and fell into the water from the yacht Splendour while trying to secure the vessel’s dinghy which had been bumping against the side of the boat. On board at the time were Natalie, her husband Robert Wagner, Christopher Walken, her co-star in a movie she was making called Brainstorm, and the vessel’s captain Dennis Davern. Walken & Wood in a scene from Brainstorm

On November 17, 2011, almost 30 years to the day since the tragedy, the Los Angeles County Sheriff’s Department announced it was reopening the case on account of new information being received. A new ‘ear witness’ had come forward, a retired stockbroker named Marilyn Wayne, whose boat was moored less than 50 yards from Splendour that night. She told police in an official statement that on the night of Natalie’s death she heard a woman’s voice yelling, ‘Help me, someone please help me I’m drowning’. She claimed she and her son heard the cries repeatedly, and that her son had noted the time on his digital watch as ‘just minutes after 11pm.’

The next part of Miss Wayne’s statement really threw the cat among the pigeons, however. She said she soon heard ‘a man’s voice slurred, and in aggravated tone, say something to the effect of, ‘Oh, hold on, we’re coming to get you.’ According to Miss Wayne, ‘not long after, the cries for help subsided, but we heard the cries for up to fifteen minutes.’ She says she called the harbor patrol, but no-one answered, so she tried the sheriff’s office and was advised that a helicopter was on its way. It did not show up.

‘I had a ‘client box’ designed for clients to drop off messages through a slot in the front’, recalled Wayne. ‘Three days after Natalie died, I found a scribbled message on a torn piece of paper in my box that read: ‘If you value your life keep quiet about what you know.’ ‘I immediately suspected it was related to Natalie Wood’s death because that’s all anyone had been talking about. I was disturbed and even told an attorney about the threat.’

A second individual came forward as well. Dennis Davern  was the captain of the Splendour that fateful night, and he claims to have heard Natalie and her husband arguing after Walken had retired to bed. The only words he could clearly define, he said, was Wagner telling his wife to ‘Get off my fucking boat!’ Wagner has always denied there was any argument with Natalie, only with Walken, but polygraph examiner Howard Temple says Davern had clearly passed his test, adding that ‘Davern made the statement that he stayed at the Wagner home…[was] told not to talk…and could not leave the estate without bodyguards.’ He claimed he was ordered by Wagner not to give details to police, and that the actor had an attorney draw up a statement for Davern to stick to. ‘I signed a statement the appointed attorney drafted, one completely void of the facts surrounding Natalie Wood’s disappearance.’ Dennis Davern back in the eighties

Once he realized Natalie was no longer aboard, Davern confronted Wagner. ‘I immediately wanted to radio for help, to turn on the searchlight, but Robert Wagner told me sternly, ‘We are not going to do that. We will wait and see if she returns.’ Wagner denies this conversation ever eventuated. Was he hoping to avoid bad publicity if the argument between him and Walken became public knowledge? ‘He discussed with me the repercussions of bringing any immediate attention to the situation’, remembered Davern, ‘and he claimed he did not want to tarnish his image.’ It should be stated here that neither Wagner nor Walken have ever been considered ‘suspects’ in Natalie’s death. Any criticism of their conduct revolves more around what they did not do that night.

The former supervising rescue boat captain, a man named Roger Smith, still believes Natalie could have been saved. It was Smith who pulled her body from the water. And he hoped the reopening of the case might explain the inordinate time lapse that ensued before lifeguards were called. ‘Based on the condition of her body when we pulled her from the water, I believe she survived for some time in the water and was blown out to sea’, he said. ‘She probably cried for help for hours. I’ve always believed she could have been saved. Her fingers were still pliable when she was pulled from the water, suggesting she had not been dead for hours.’

Back in 1981 Smith asked Wagner outright why he did not call lifeguards earlier. ‘We thought she was off on another boat screwing around because that’s the kind of woman she is’, the actor replied. We can read into that response anything we care to, but it was a rather harsh response from a man who had just lost ‘the love of his life’. Natalie’s sister, the former Bond girl Lana, has always believed that Wagner had something to do with her death. She knew Mr. Davern and trusted him completely. ‘I’ve never known him to lie’, she told Matt Lauer of NBC’s Today program. ‘He certainly never has to me. He had called me many years ago very upset, crying, obviously had been drinking and unburdening himself. Little bits and pieces had always filtered over to me. There were so many things that were always bothering me.’ Primarily, she said, Natalie would never have voluntarily put herself in danger of falling in the water because she was absolutely terrified of it. Lana and Wagner have not spoken for many years. 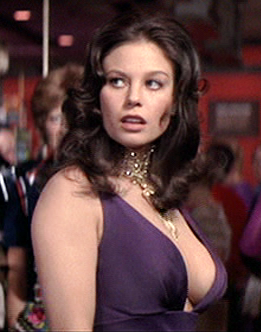 Lana Wood as Plenty O’Toole in the Bond Mr. Davern has written a book about the tragedy and has, not surprisingly, been accused of profiteering by that curious chunk of the population who consider any divergence from the ‘official’ explanation to be either the work of profiteers or conspiracy freaks. Retired Los Angeles County Sheriff’s Office Homicide Bureau detective Duane Rasura has no doubt that Davern is cashing in on his involvement in events. ‘If I have ever the slightest inkling there was a murder, something suspicious, I would have worked it’, he said. ‘I did not cover for anybody, and I wouldn’t cover for anybody. I don’t care about their celebrity status. They were people.’

As far as the statements of Wayne and Davern are concerned something does not quite fit. To listen to a person begging for help for even one minute is a long time, but to let that person continue to plead for help for fifteen minutes without doing something there and then to help (other than make a couple of phone calls) seems heartless and inadequate in the extreme. But what is most puzzling is this. If Wayne could hear Natalie pleading for help from fifty yards away (the distance seems to vary from 50 feet to 40 yards to 50 yards), then why didn’t Davern hear her? He was even closer. Are we to believe neither he, Wagner nor Walken heard anything from the struggling woman, while two people fifty yards away heard everything?

In January 2011, a new coroner’s report concluded that bruises to the face, wrists, knees and ankles of the dead woman may have happened before she entered the water, and may indicate foul play. The new report poked a lot of holes in the original, but fell short of accusing anyone of murder. The National Enquirer seemed think this was significant, but it appears to be speculation only. Scraps of a lifeguard’s journal (I presume Mr. Smith’s) suggesting Natalie may have walked in on Wagner and Walken having sex was also fastened upon by the publication. But, the comments were merely based on a detective envisioning any number of possible scenarios for murder. This was just one of them and had no factual basis whatsoever. As of 2012, the official cause of death has now been altered from ‘accidental’ to ‘undetermined’, and there it will probably rest.

I do not believe Robert Wagner had anything to do with his wife’s death. All his actions (and inaction) can be attributed to his celebrity status and that of his wife. If he did not call the lifeguard at once, it is quite feasible he was hoping she would quickly return and there would be no awkward media questions. If he had attorneys prepare a statement for Captain Davern to sign, then once again this was more than likely to keep the lid on the argument that involved Walken and (possibly) Natalie. All this has since acquired a sinister tinge because poor Natalie failed to survive. Then again, if Miss Wayne is to be believed, why did Natalie’s fifteen minutes pleading for help go unheeded? Someone is not telling the whole truth. Either Miss Wayne is mistaken or lying OR she is telling the truth. If she is telling the truth, then the three men on board Splendour ignored Natalie’s cries for help and were, in part, responsible for her death.