Mel Gibson was born in New York in 1956, but lived most of his youth in Australia. He claims that he started drinking at 13. In 1984 in Ontario he was banned from driving for three months after rear-ending a car while intoxicated. By the time he made Lethal Weapon 2 he admitted to drinking five pints of beer for breakfast! He maintains that by 1991 he was attending AA meetings, and that alcoholism runs in his family. In a 2008 documentary he revealed that he had been diagnosed with bipolar disorder. ‘I had really good highs but some very low lows’, he said. ‘I found out recently I’m manic depressive.’  What most people are asking is – does Mel Gibson have an ongoing medical problem or is it a behavioural one? Is he truly ill or just a violent, foul-mouthed bigot and homophobe, an alcoholic with no control over his temper? According to Beverly Hills psychiatrist Carole Lieberman MD (she has never treated Gibson by the way), ‘a lot of times, people with bipolar disorder try to self-medicate with alcohol or drugs’. It is difficult to evaluate the validity of Gibson’s statement, however, when he did not say who told him he was bipolar. ‘It was not definite that it was a psychiatrist’, she added, ‘nor was it definite that any psychiatrist had done a thorough evaluation of him.’

If there were awards given out for saying the wrong thing at the wrong time, for only opening your mouth to change feet, then Gibson would have a roomful of them by now. In 1991, he gave an interview to the Spanish newspaper El Pais, in which he burst forth with a tirade against homosexuals that was nothing short of astonishing, especially given his high profile at the time. Perhaps, he thought only Spanish people could read Spanish, and that they did not care much either way about his comments. Whatever his reasons, he has since paid an enormous price for his outburst, for it proved to be the commencement of his incredible slide in popularity. Here is what he said: ‘Homosexuals take it up the ass. This is only for taking a shit. I became an actor despite that. But with this look, who’s going to think I’m gay? It would be hard to take me for someone like that. Do I sound like a homosexual? Do I talk like them? Do I move like them?’ Surely, even Gibson could not be stupid enough to think he could make such statements and not expect them to go un-noticed? When asked, in 1999, about the El Pais comments, he replied, ‘I shouldn’t have said it, but I was tickling a bit of vodka during that interview, and the quote came back to bite me on the ass.’ Quite a few quotes actually. When the Gay & Lesbian Alliance Against Defamation (GLAAD) called on him to apologize for his comments, Gibson told Playboy, ‘I’ll apologize when hell freezes over. They can fuck off!’ Later, he joined with GLAAD in hosting lesbian and gay filmakers for a seminar! 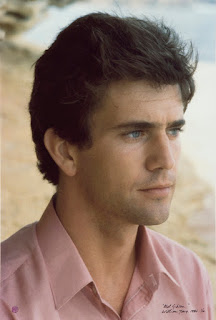 Then, in 2006, he did it again. This time he spewed forth with a mouthful of anti-Semitic comments that must surely have spelled the kiss of death to someone who makes his living in a business almost entirely run by Jews. We are not privy to all he said when he was arrested for speeding at 2.36am on 28 July, 2006, but the bits and pieces that have slipped out are condemning enough. It appears mighty Mel was hurtling along the Pacific Coast Highway, Malibu in his Lexus, at 140 km/h in a 72 km/h zone, when he was pulled over on suspicion of driving under the influence of alcohol. The reading he gave placed him 50% over the legal limit, so he was charged. And then the fun started. Gibson’s conduct was fine until he was advised that he was about to be detained/arrested for drunk driving. ‘Everything’s fucked’, he angrily exclaimed. ‘My life is fucked.’ The arresting officer reported that the actor became highly agitated about his arrest going public, so he ordered Gibson into the back seat of the police car, promising him that handcuffing would not be necessary if he co-operated. ‘I’m not going to get into your car’, Gibson told him, and then made a bee-line for his Lexus.

The officer caught and handcuffed him. Amidst other profanities, the actor threatened the arresting officer. ‘I’m going to fuck you’, he said. ‘You’re going to regret you ever did this to me’. All the way to the police station Gibson kept reminding the officer that, ‘I own Malibu and I will spend all my money to get even with you.’ It was then that the actor began blurting out a string of anti-Semitic remarks. ‘Fucking Jews!’ he said. ‘The Jews are responsible for all the wars in the world.’ At that moment he asked the officer, ‘Are you a Jew?’ On arrival at the station other officers witnessed Gibson’s erratic and abusive behaviour. He co-operated for the breath-test, but then refused to provide booking information or to sign anything. A 750 ml bottle of Cazadores Tequila concealed in a brown paper bag was found in his car. It was ¾ full. ‘It’s not mine’, he said. Ordered to attend a First Offenders Program in August 2006, Gibson apparently did so, and was praised 11 months later for sticking to it longer than he had been required to.

About two years earlier Gibson’s father, the outspoken Hutton Gibson, repeated doubts he raised in a New York Times article about the Holocaust to radio interviewer Steve Feuerstein, arguing that many of the European Jews counted as death camp victims had, in fact, escaped to Australia and the United States. ‘It’s all – maybe not all fiction – but most of it is’, he said. He added that the gas chambers and crematoria at camps such as Auschwitz would have been incapable of killing so many people. ‘Do you know what it takes to get rid of a dead body? To cremate it?’ he continued. ‘It takes a litre of petrol and 20 minutes. Now, six million of them?’ One wonders if Mr. Gibson thinks that all six million were supposedly gassed and cremated in Auschwitz alone, or if he is even aware that there were ten extermination camps in all, plus 61 other camps where inmates died like flies throughout Occupied Europe over five or six years, not to mention those killed by the SS in Russia, Poland and countless small villages and towns across Europe. When Mel Gibson was interviewed by Diane Sawyer he warned her about mentioning his father. ‘He’s my father. Gotta leave it alone Diane. Gotta leave it alone.’ She left it alone.

Fast-forward to 2009 and Gibson’s romance with Russian singer/songwriter Oksana Grigorieva. The couple had a daughter that year, but by 2010 the relationship had degenerated into a running custody battle. Grigorieva accused him of beating her and a restraining order was issued barring the actor from coming anywhere near mother or daughter. In July 2010, Gibson was recorded during a phone call to Grigorieva, suggesting that if she got ‘raped by a pack of niggers’ it would be her fault. Later, he would plead ‘no contest’ to a misdemeanour battery charge.

In 2012, writer/director Joe Eszterhas secretly recorded a Gibson tirade aimed at him, then released the audio to the public, telling The Wrap that he did so out of concern for Mel, that the actor ‘badly needs help’. ‘My interest isn’t to damage him with this tape’, explained Eszterhas, ‘but to prevent damage being done to others…I strongly believe that unless he seeks and receives some kind of psychiatric help, someone is going to get hurt.’ Gibson responded in an open letter to him, stating that, ‘I will acknowledge like most creative people I am passionate and intense…I did react more strongly than I should have.’ He added that his ‘colourful language’ was simply a show of irritation over a stalled movie project. So, is Gibson mentally ill or just a jerk? Has he been properly and thoroughly diagnosed? Is he supposed to be on medication? We are no wiser it seems. What we do know is that, in the space of about twenty years, he has publicly alienated homosexuals, Jews, and African-Americans, and has been accused of beating up a woman. Surely, it is about time he changed something. He should either get on medication or get off the booze. And he owes it to genuine sufferers of bipolar to present some medical proof that his outbursts are beyond his control.