When NBC first promoted the upcoming new series Star Trek in 1966 it was decided to airbrush Mr. Spock’s pointy ears out of all photos. Executives were concerned that viewers would react badly to a character with ears that resembled the Devil’s, although how anyone can confidently describe Old Nick’s ears is questionable at best. Spock, of course, became immensely popular, with female fans particularly, who thought his ears were ‘sexy’. The Vulcan Salute (the middle and ring fingers parted to form a vee on each hand) was created by Leonard Nimoy for a 1966 episode of the series titled ‘Amok Time’. He recalled seeing the gesture as part of the High Holiday services of Orthodox Judaism when he was a boy. Hebrew priests formed the letter ‘shin’ with their fingers, it being the first letter of the Hebrew word for the ‘Almighty’. 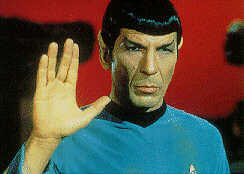 At a ‘Trekkies’ convention in New York City a few decades back Jane Wyatt, (Spock’s mother in the series), answered a question dear to the hearts of all devout Star Trek fans. What is Mr Spock’s first name? When he was a little Vulcan his mum and all his little Vulcan playmates called him – wait for it – Harold! So, now you know. As a matter of interest, the ‘transporter beam’ was created by using an industrial fan to blow fine aluminium powder under a bright spotlight. Nothing to it. And Captain Kirk never uttered the exact words, ‘Beam me up, Scotty’ in the series. Not once.

Although Canadian and not Scottish, James Doohan (like a great many actors) could conquer any accent required of him, so he convinced the creator of Star Trek, Gene Roddenberry, that the engineer should be a Scot. He then produced an accent to match. He argued, evidently convincingly, that, historically, ‘all the best engineers have been Scottish’, and landed the role that made him famous, that of Chief Engineer Montgomery Scott. Throughout the series Doohan also supplied a number of ‘guest’ voices in varying accents. 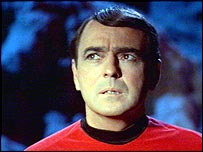 His on-set dislike of William Shatner, the star of the show, was well known. ‘I like Captain Kirk’, he said, ‘but I can’t say that I’m very fond of Bill Shatner.’ He detested Shatner’s showboating, stealing lines, and keeping his fellow actors in the background. In one of his books Shatner expressed his astonishment at both Doohan’s and Walter Koenig’s (Chekov in the series) strong dislike of him as a person, stating that he had no inkling of this until decades after the series had concluded. Initially, Shatner and Nimoy clashed as well, especially when Spock’s popularity threatened Kirk’s. Bill Shatner became extremely jealous of his co-star. After all, Bill was the star of the show. But in time both men mellowed and formed a strong friendship. 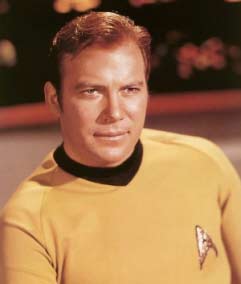 Nichelle Nichols (Lt. Uhura) told Shatner later in life how she utterly despised him, yet he got along well with DeForest Kelley (Bones) and (ultimately) with Nimoy who later was best man at Shatner’s third wedding. One of the main problems lay in the wording of Shatner’s contract which guaranteed him more lines in each episode than anyone else. From time to time he would, therefore, have dialogue switched from supporting players to him in compliance with that policy. Doohan, Takei and Koenig greatly resented this. Shatner also insisted his name be typed 10% bigger in the credits than Nimoy’s or Kelly’s. Kelly, incidentally, actually preferred making westerns, but accepted the role of Doctor McCoy here because he realized that the popularity of westerns was waning rapidly.

Nichelle Nichols was the first African-American woman to regularly portray a positive, even heroic, character on a TV series, pre-dating Diahann Carroll’s series Julia by two years. The characters of Uhura and Nurse Chappel (Majel Barrett) were created by Gene Rodenberry at a time when he was sleeping with both actresses. Nichols ended her affair with him soon afterwards. Miss Barrett later married him. NASA hired Nichelle to help recruit minority and female astronauts into its space program in the 1970s. Tragically, three of those she helped sign, Jewish astronaut Judith Resnick, black astronaut Ron McNair and Japanese-American astronaut Ellison Onizuka, died in the Challenger Shuttle explosion on 28 January 1986. Dr Martin Luther King recognized the importance of the Uhura character for black Americans and he said as much on several occasions.

On 22 November 1968, in an episode titled Plato’s Stepchildren, Uhura and Kirk shared the first scripted inter-racial kiss on American television. There were more letters about that kiss than anything else in the entire run of the show. The first ever inter-racial TV kiss took place on British television six years earlier. Nichelle actually auditioned for the role of Spock at one time, would you believe?

George Takei, who portrayed Lt. Sulu, is a Los Angeles born Japanese actor who spent WW2 in internment camps in Arkansas and Northern California. When gay marriage was legalised in 2008 in California he wed Brad Altman, his partner of the past 21 years. Takei’s homosexuality was a closely guarded secret throughout the series and later. He missed nine episodes of Star Trek in the second season because he was away filming The Green Berets (1968). In his absence the Chekov character was created and Walter Koenig was recruited to play him. George and Walter did not get along at first but ultimately became good friends. You might notice how Chekov has a Beatles/Monkees look about him. That was deliberately done by the producers. Both groups were huge at the time. The tall tale that he was given the nationality of a Russian because Pravda had complained about no Russians being aboard the USS Enterprise is a complete fabrication. The Soviet Union never ran the series anyway.

Grace Lee Whitney was cast as Janice Rand and made eight appearances in the first season before being written out of the series. Four different reasons have been given for this. Rodenberry claimed it was simply a budget cut, nothing more. Others argue that the plan to make her Captain Kirk’s love interest became impractical. Another story suggested Grace had an issue with alcoholism which was affecting her performance. Finally, the lady herself argued that she was let go because of her accusations that a network executive assaulted her. Whatever the reason she was gone by season two, but would reprise her role as Rand in several of the Star Trek movies.

There exists in Houston a company known as Space Services Incorporated (SSI). It specialises in sending well-heeled dead people hurtling into space for an unearthly fee. At his request, SSI sent James Doohan on his last mission. A lipstick-sized container transported part of Scotty’s ashes into deep space accompanied by the partial remains of a hundred or so other personages. Gene Roddenberry had already preceded him. So too, for that matter, had Timothy Leary the LSD guru of the sixties who finally got to experience the ultimate ‘high’ so to speak.