Every once and a while the movies (or television) unearth a phenomenon, someone who strikes a chord with audiences around the world. One such performer in the sixties was Ryan O’Neal, and all because of a staggeringly successful TV soap called Peyton Place that ran from 1964 until 1969. The 20 year-old actor played Rodney Harrington in no fewer than 501 episodes and millions of young girls and women across the globe became smitten with him. When, in 1970, he starred in the hugely successful movie Love Story, his popularity soared even higher if that was at all possible. To female fans everywhere he was ‘catnip’ and he knew it. And he (understandably) made hay while the sun shone. with Mia Farrow in Peyton Place 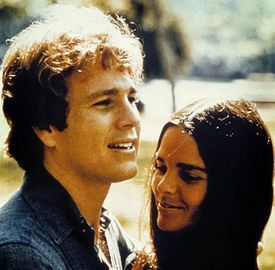 with Ali MacGraw in Love Story

His Hollywood conquests included Ursula Andress, Joan Collins, Britt Ekland, Diana Ross, Barbara Carrera, Barbra Streisand, Lauren Hutton, Bianca Jagger, Anjelica Huston, Lana Wood, Melanie Griffith, Anouk Aimee and his Peyton Place co-star Barbara Parkins. But there were many, many more. Along the way he married twice. Wife number one was actress Joanna Moore, the mother of his daughter Tatum and son Griffin. Marriage number two was to another beautiful actress Leigh Taylor-Young who gave him another son, Patrick. Disillusioned by two failed trips down the aisle Ryan chose instead to move in with his next love, actress Farrah Fawcett. They remained together for many years, producing a son named Redmond. O’Neal was a close friend of actor Lee Majors who was married to Farrah Fawcett when he first met her, but that friendship evaporated when she chose to move in with Ryan. Throughout his marriages and relationships O’Neal’s children (with the exception of Patrick it seems) were constantly exposed to drugs and alcohol. Tatum, Griffin and Redmond all had monumental substance issues. In February 2007 Ryan returned home to find his son Redmond tied to a staircase. Older brother Griffin had arrived at the conclusion that restraining his 22 year-old sibling was the best way to keep him from leaving the house to use more drugs. Ryan became enraged, produced a gun from somewhere, and fired a warning shot over Griffin’s head. The actor was fortunate not to be jailed. In 2008, however, both he and Redmond were arrested for narcotics possession and Ryan was sentenced to undergo 18 months of rehabilitation treatment. 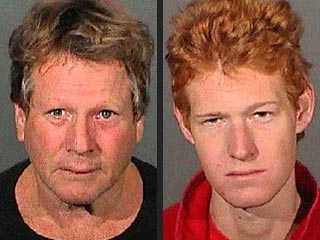 Ryan and Redmond arrested in 2008

His only daughter, actress Tatum O’Neal, readily admits to having been hooked on drugs and sex for many years as she rebelled against her father’s disinterest in her. She openly disapproved of his relationships with both Farrah Fawcett and Ursula Andress, even commenting on them to the media when she was still a child. Her mother, Joanna Moore, a woman hopelessly addicted to alcohol and amphetamines, used to play the sheriff’s girlfriend in TV’s The Andy Griffith Show back in the sixties. Joanna’s perpetual drunkenness saw 6 year-old Tatum regularly left in the company of strange men, some of whom violated her. Eventually her father took her to his Malibu Beach home. It was the ultimate bachelor pad where she often overheard him having sex with his endless string of girlfriends. ‘There was never any privacy’, she recalled. ‘You could always hear him.’ On the set of Paper Moon (1973) 9 year-old Tatum’s co-star Burt Reynolds was bemused by her antics. ‘I like children’, he said, ‘But she ain’t no kid’. Michael Jackson claimed she was his ‘first love’, but Tatum denied this in her autobiography titled A Paper Life. She insisted that he only kissed her (without her permission) when she was 12 and he was 17. Jackson kissing a 12 year-old without her permission? Who’d have thought it? She also claimed her father ‘slugged her’ out of jealousy because his performance in the movie had been generally overlooked, while Tatum’s had won her an Oscar. ‘I mean, there was always a slugging thing’, she said in a 2004 interview with NBC’s Stone Phillips. ‘Or a backhand, or throwing out of the car or whatever.’ On the other hand, she said, ‘My dad could be one of the most charming men you’ll ever meet.’ For a while he took her to whichever party he chose to attend. ‘Doesn’t every dad bring their daughter to the Playboy Mansion? No, I guess not. OK, I was there’, she added.

When she was 12 years old Ryan took her to Europe when he made A Bridge Too Far, and she was allowed to take with her an 18 year-old girlfriend she had become very attached to. Her name was Melanie Griffith. ‘But there’s an agenda that I’m not aware of’, said Tatum, ‘which is that they’re going to sort of get together – and I walk in on them and I end up trying to take my life in a very sort of severe way.’ Then she went to a friend of her father who gave her ‘a lot of drugs’ before molesting her. She has never revealed his name. Her tempestuous marriage to tennis bad boy John McEnroe, to the surprise of absolutely nobody, failed to go the distance and she resorted to heroin in an attempt to handle the break-up. The couple did manage to last about eight years, however, during which time they had three children. After a long battle McEnroe won custody of all three of their offspring. Given Tatum’s drug and alcohol past that came as no real surprise to most pundits. Her actor brother Griffin has been involved with drugs and booze all his life. In 1986 he was briefly charged with the manslaughter of Francis Ford Coppola’s son Gian-Carlo when the young man was decapitated in a speed-boat accident. Griffin was the driver of the boat in which Coppola was a passenger. While endeavouring to pass between two other boats Griffin failed to notice they were connected by a towline. He ducked just in time but the unfortunate Gian-Carlo did not. In August 2011, after allegedly threatening to kill an ex-girlfriend because she broke up with him, he rammed his Ford Bronco into the girl’s parked car as she sat fearing for her life. Convicted of the lesser charge of negligent driving he served an 18-day jail sentence for not completing community service. The O’Neal family has been described as one of the most dysfunctional in Hollywood history. ‘My whole family has been absolutely destroyed to smithereens from drug addiction and alcoholism’, said 50 year old Griffin in a recent interview. ‘The common denominator is drugs and alcohol and depression and it’s a never-ending cycle.’ He claimed his drug and alcohol addiction began when he was nine years old. ‘There were drugs everywhere in my family all day, every day. It was the 60s and 70s and Tatum and I had a tough time.’ Ryan famously punched out Griffin’s teeth when he was 16. There is a fourth sibling, Patrick, one who does not do drugs or alcohol and who holds down a steady job as a sportscaster for Fox Sports. Between 1995 and 2002 he was married to Rebecca De Mornay, an actress best remembered for playing a conniving hooker in one of Tom Cruise’s early successes Risky Business (1983). Patrick is rarely asked to comment on the family, probably because he has nothing sensational to say about his father or his brothers and sister. In 2012, however, he wrote a piece in praise of his father, describing Ryan as his ‘hero’, and a kind and loving father. He defiantly rejected all the negative talk show appraisals of the man, declaring that none of the people on the panels knew his father at all. It is a compelling piece made more compelling because it comes from the only family member without substance abuse issues. So, do we believe two substance abusers or one sportscaster? Tatum and Griffin say one thing; Patrick the opposite. Redmond (the other substance abuser) does not seem to say much either way. More than likely the truth about Ryan O’Neal lies somewhere between the two extremes – not exactly the devil incarnate, but scarcely ‘Father of the Year’ material either.