Whenever any discussion takes place about former cowboy star Buck Jones, sooner or later it will include the ‘fact’ that he sacrificed his life saving others back in 1942 when the Cocoanut Grove Night Club in Boston burnt down killing 492 patrons. For decades it was generally accepted that Jones had escaped the conflagration, but then lost his life returning (more than once) to drag or guide others to safety. Nice story, but that’s all it is – a story.

The club was a veritable firetrap in 1942. Owned by Barney Welansky, a man who boasted of having Mob ties, it was projected as a South Seas tropical paradise complete with artificial palm trees (said to be the same ones used in the Rudolph Valentino silent classic The Sheik), rattan and bamboo everywhere, and satin canopies overhead. The building covered a floor and a half, most of its available space consisting of bars, lounges and dining rooms. Authorized to hold a maximum of 460 patrons, on that fateful night of November 28, 1942 it held hundreds more, possibly over 1,000. Welansky had been plagued in recent times by customers slipping out through any one of several exits without paying, so he had taken steps to remedy the problem. Several of these doors were locked, others concealed with drapes, and he even bricked up an emergency exit altogether! A plate glass window was boarded up as well. Several decorations obscured exit signs. All in all it was a disaster waiting to happen. And it did.

Official reports say the fire started at around 10.15, possibly because a soldier had removed a light bulb so that he could kiss his date in privacy. A sixteen year-old busboy attempted to replace the bulb, dropped the new one, then lit a match to see what he was doing. Maybe this set alite some decorations and palm trees, the flames instantly racing around the room and up an adjoining staircase. Within minutes the entire club was ablaze and filling with thick, pungent black smoke. As panic gripped the patrons hundreds tried to exit through the main entrance, a revolving door, totally inadequate as an escape route for over 1,000 terrified people. It was soon jammed as bodies began piling up on both sides of it. Firemen had to remove it altogether, but by then it was far too late. All other doors only opened inwards (if they could be opened at all that is). It was later estimated that a further 300 lives could have been saved had these doors opened outwards. Buck Jones and his guests had been seated near a bandstand. Stories quickly circulated that he had returned time and again to rescue others, and had died two days later in hospital from burns sustained due to his heroism. In fact, he was found in his own chair at his designated table, overcome by smoke. He had never left it, much less found his way back to it in the blinding smoke. Indeed, even the firemen were unable to get into the building. There were just too many bodies piled up at the entrance. Many of the victims were found with a white foam on their lips, indicative of a very toxic component in the decorations or furnishings. As late as the 1990s investigators discovered that a highly flammable gas refrigerant, methyl chloride, greatly contributed to the speed of the fire. Being wartime, this gas was being used because there was a shortage of Freon refrigerant.

Welansky was sentenced to 12-15 years gaol, and was quietly released after four. He died nine weeks later of cancer. The busboy, Stanley Tomaszewski, was exonerated, but remained ostracized for years before dying in 1994.

the day after the fire

The abject failure of 55 Days at Peking and The Fall of the Roman Empire (1964) resulted in the collapse of Samuel Bronston’s production company. Whereas ‘fall’ was clearly one too many Roman blockbusters, ’55 Days’ seemed to be a good idea at the time. After all, it depicted a unique event in history set in a wonderfully exotic location, and one full of heroes from several nations. So what went wrong? Well, Nicholas Ray’s direction was pedestrian at best, and not helped by his replacements when he fell ill. The picture was also too long (154 minutes). Add to that another wooden performance by Charlton Heston, (the man who made ‘wooden’ an art form, in my opinion), a totally lackluster turn from a clearly over the hill Ava Gardner, plus a screenplay that was about as interesting as the description of an America’s Cup race, and the outcome was dull with a capital ‘D’. And that was a pity because it could have been a good movie in better hands. As it happened, however, the picture cost a whopping (for then) $17 million to make and grossed just $10 million. This, coupled with the even more disastrous The Fall of the Roman Empire, which cost over $18 million to make, but grossed less than $5 million at the box-office, and it is little wonder that Bronston went down the tubes. 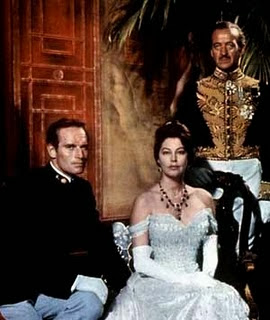 Chuck & Ava look anything but happy,

even in this still.

Heston certainly did not enjoy Ava’s unprofessional attitude on the set, and who could blame him? She often turned up for work in a drunken state and was at loggerheads with Ray, demanding rewrites and abusing him in front of the cast and crew. In fact, she was in the middle of a long-running nervous breakdown. Heston always believed her character was killed off because the director and producers were sick and tired of her conduct. Although he had quite a reputation for aggravating his co-stars, it should be noted that Chuck got along just fine with David Niven on the set, so it would seem the blame for the disharmony can be placed squarely at Ava’s door. US Marines during the siege

In the sixties China’s hostility to the Western world kyboshed any possibility of filming in Peking, so a 60-acre replication of 1900 Peking was constructed outside Madrid at a cost of $900,000, an exorbitant amount in 1962. The Legations buildings were built with superb accuracy and a number of authentic Royal Chinese Court costumes (including Empress Tzu His’s and Prince Tuan’s) were loaned by a Florentine family. A major problem was finding hundreds of Chinese/Asian extras to play Boxers and members of the Royal Court, so scouts were sent around Britain, France and Spain, mostly to Chinese restaurants, hiring staff at a good wage to take part in the movie. For several months there was scarcely a Chinese restaurant open for business in Spain as staff headed for the plains outside Madrid.

In 1900, there were eleven foreign Legations besieged in Peking by the Boxers, although only eight actually had troops to do any fighting. The Dutch, Belgian and Spanish Legations had no marines and so took little part in the conflict. The eight that did participate were the United Kingdom, the United States, France, Austria-Hungary, Italy, Germany, Russia and Japan. The fighting lasted from 20 June until 14 August 1900, during which 55 of the 409 marines involved were killed and 135 were wounded. Future US President Herbert Hoover (and his wife) were among the 473 civilians trapped in the Legations. Thirteen civilians died in the conflict. How many of the 2800 Chinese Christians trapped with them died has never been recorded. It was estimated that around 20,000 Boxers took part, their casualties also unknown. It was only the landing of a 20,000 strong Allied relief force that brought about a cessation of hostilities, and just in time. Over 45% of the defenders were either dead or wounded and the end seemed very near. The French and Japanese defenders were singled out for displaying outstanding bravery. Both groups suffered in excess of 100% casualties as wounded marines returned again and again to the parapets, only to be wounded yet again.

Footnote: Japanese actor Juzo Itami (under the name of Ichizo Atami) played the Japanese commander Colonel Shibo in 55 Days at Peking. In 1997, the 64 year-old actor/director threw himself from the eighth floor of his apartment building. Terribly injured, he later died in hospital. Itami left behind a suicide note protesting his innocence of charges of infidelity with a younger woman leveled by a Tokyo tabloid.