Mitchum’s father was killed in an accident when he was just two years old. As a teenager Bob criss-crossed the country as a train hobo until he was arrested at 15, charged with being ‘a suspicious character with no visible means of support’. He spent that summer on a Georgia chain gang, after which he set off for Long Beach, California. There he attended high school, got jobs, including ghost-writing for an astrologist, and even got married to his high school sweetheart in 1940.

World War Two came along and he gained work at Lockheed. For a while he worked alongside the future Marilyn Monroe’s first husband, James Dougherty. His first job in the movie industry was as a replacement for an extra killed in an accident. He recalled wearing the man’s costume, still stained with blood and bits of brain, in the movie called Hoppy Serves a Writ. In fact, he played ‘heavies’ in a number of Hopalong Cassidy westerns before signing with Howard Hughes at RKO in 1944. Mitchum (left) in The Story of G I Joe

His first big break came in 1945 when he made The Story of GI Joe. Mitchum’s career could have ended right then and there, because he was arrested following a domestic disturbance shortly after the picture’s release. The arrest soon erupted into a brawl in which he took on the two arresting officers. A judge with a sense of humour offered him a choice – six months prison or join the services. Most reluctantly, he chose the latter. ‘When they took me away’, he joked, ‘I still had the porch rail under my fingernails.’ He spent his days in the army as a medic in an induction centre checking recruits’ genitals for venereal disease. ‘I was a pecker checker’, he said with a grin.

Released after his ‘drugs bust’

By 1948 he had separated from his wife and was partying heavily and smoking a lot of marijuana. There was a particularly beautiful 19 year-old MGM and Warners actress named Lila Leeds who caught his eye at that time. In fact, she caught just about everyone’s eye. James Bacon said she was even more beautiful than Lana Turner. Character actor Jack Elam remembered her vividly, describing his first sight of her: ‘You just stood there with your fucking mouth hanging open’, he said. Lila and Mitchum hit it off, partly because they both enjoyed marijuana. They were, however, unaware that the FBI were watching both of them. Just after midnight on September 1, 1948, police burst into Lila’s home, catching both actors in the act of smoking reefers. Bob’s conviction on the narcotics rap was later investigated by his friend Howard Hughes. His people evidently uncovered evidence that indicated a blackmailing conspiracy involving LA gangster Mickey Cohen and Lila. Her premises had been wired with microphones and certain police officers were advised to listen in; hence their sudden appearance at the door soon after Mitchum lit up.

Newspaper headlines blew the story all out of proportion. ‘A Man In The Grip Of Demon Drugs!’ was one of them. Both culprits were branded ‘Dope fiends’ by the papers. Because Lila had just left MGM for Warners, Mayer chose not to help her out of the predicament, and to throw the weight of his ‘fixers’ behind Mitchum as a personal favour to Hughes at RKO. Hot-shot lawyer Jerry Giesler managed to get Mitchum’s sentence of two years prison reduced to 60 days. ‘Prison was like Palm Springs without the riff-raff’, Bob said on his release. Compared to spending a summer on a chain gang he was probably right. Lila’s career was sacrificed for his. Two years later she exploited the incident by starring in a ‘B’ flick entitled The Devil’s Weed. After that she dropped from sight. 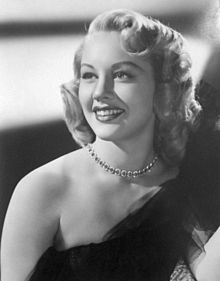 The script for Angel Face (1952) required Robert Mitchum to slap Jean Simmons across the face. Being a bit of a trouper, she insisted he not hold back on the slap so he duly hit her quite hard. Director Otto Preminger was not happy with the take and ordered another, then another and another. After several more takes, Jean’s cheek was becoming redder and sorer. Finally, Mitchum turned to Preminger and without warning slapped him hard across the face. ‘Would you like another, Otto?’ he asked the startled man. Preminger wisely decided that the previous take was good enough and closed down the set for the day. with Jean Simmons in Angel Face

The 1970 papers were full of details about Mitchum’s affair with Sarah Miles, his co-star in Ryan’s Daughter. Throughout the shoot the 52 year-old Mitch and the 28 year-old Sarah spent most of their time in his caravan. Even so, she was quick to deny any intimacy took place. Sarah was nothing if not forthright about such accusations, so it is quite possible she was telling the truth. Mitchum did not appear to mind spilling the beans on her, however, telling reporters that she was a ‘urine therapy addict’. In other words, she drank her own urine. As was her way, she readily admitted to this. As I said earlier, she was notoriously candid about such things.

with Sarah Miles in Ryan’s Daughter

Mitchum possessed none of the massive ego generally associated with successful movie stars, enjoying a joke on himself as well as anyone. As heterosexual as they come, he delighted in telling the story about the time he was a guest at Eleanor Roosevelt’s home. ‘I saw this pink nightgown’, he said, ‘and just for a gag I put it on over my clothes. Noel Coward walks in and says, ‘My dear, you look simply di-vine!’ and kisses my hand. Next time I see Eleanor at a party she says loudly, ‘Why, Bob, last time we met you were in a pink nightgown being kissed by Noel Coward!’ What could I do but admit it?’ as Max Cady in Cape Fear

as Harry Powell in The Night of the Hunter

He liked to say that he became an actor simply to ‘get laid’, ‘score some pot’ and ‘make money’, but that was a deliberate oversimplification, for the man was a truly fine performer if the material (or the director) interested him. His portrayal of the evil Max Cady in 1962’s Cape Fear is still great today, as is his other iconic performance as Harry Powell in Charles Laughton’s masterpiece The Night of the Hunter (1955). Late in his career he tended to do things just for the pay packet, but at his best Mitchum was as good as anyone. As a matter of interest, his brother, John Mitchum, was a regular member of thje F Troop cast back in the sixties (1965-67). He played Trooper Hoffenmueller. A decade later he played Clint Eastwood’s off-sider Frank DiGiorgio in Dirty Harry and Magnum Force. He passed away in 2001.

APOLOGY: For those who look into this website regularly, please accept my apologies for not posting anything for several days. I try to post something every second day, but we moved house last Saturday and I was without Internet or computer until today (Tuesday).