When the studio system was at its peak in the thirties and forties, a ‘Gossip Columnist’ could wreck a career with just a couple of acid-laced lines. They did not even need to be true. Louella Parsons, the Hollywood mouthpiece for the Hearst empire of newspapers, became a most feared individual. Few stars crossed her, for to do so was tantamount to committing career suicide. Her bitter rival columnist was Hedda Hopper, another woman wielding unbridled power in the industry, but it was Louella who held sway, simply because she had the unlimited resources of William Randolph Hearst to back her up. Louella was married at 17 to a family friend, and was pretty much perpetually unhappy, a sour, bitchy woman who, thanks to fortunate timing on her part, would exert enormous influence on Hollywood over an amazing length of time. She once wrote: ‘The only person I cared deeply or sincerely about was – me’. What possessed her to use the past tense in that statement is bewildering, for she was nothing if not a consistently nasty, vindictive, pompous, self-centred crone all her life. The ‘fortunate timing’ I refer to happened on Labour Day 1924, when she was one of the guests aboard William Randolph Hearst’s private yacht Oneida during a brief cruise. Sometime during the night director Thomas Ince was shot through the head and severely wounded. It seems that those on board knew what had happened, or parts of the story, but the Hearst newspapers made sure no-one else ever did. Most likely, guests were sworn to secrecy (probably via bribes) and the story was put into the papers that Ince had died at home in his bed from a heart attack brought on by indigestion. He was quickly cremated before an autopsy could be performed or an inquest held into the cause of his death. Both these actions were against California law, but we are talking William Randolph Hearst here, a man powerful and rich enough to ‘handle’ just about anything.

He owned the ten largest newspapers in America, added to his inheritance of the world’s biggest gold, silver and copper mines. In short, he could buy or threaten his way out of any predicament. And it appears he did just that. His long-time mistress, actress Marion Davies, had been sharing his bed since he first met her when she was 14 and he was over 40! He was insanely jealous of her, and so he should have been, for she had affairs, not least of all with the ever-randy Charlie Chaplin. Just why Hearst invited Charlie on the cruise is a mystery in itself, especially given the rumours regarding the little comedian and Marion. Japanese servants on board stated later that Hearst caught Marion and Charlie having sex on a private deck, rushed off to get his gun, then mistook Ince for Chaplin and shot him. One thing we do know is that anyone in Hearst’s employ who even mentioned the name Ince in his presence in later years visibly un-nerved the man. Clearly, something very wrong happened that night.

Which brings me to Louella. A day prior to the shooting she was a ‘nobody’ columnist. In fact, she had always been a ‘nobody columnist’, as far back as her first job at the Chicago Tribune, which she lost the day Hearst bought the paper and fired her. Moving to New York City, she landed a small column on the New York Morning Telegraph, in which she wrote a (deliberately) flattering piece about Miss Davies that gained Hearst’s attention. Because of it he hired her to pen a small column in the The New York American before inviting her aboard the Oneida for the weekend cruise to celebrate Ince’s birthday.

Within a month of the Labour Day cruise she was announced as chief gossip columnist on the prestigious Los Angeles Examiner – for life! In effect, she had now become the chief movie critic for the entire Hearst syndicate, about 400 publications world-wide with over 20 million readers, and suddenly able to make or break careers in Hollywood. Regarding her presence aboard the yacht that fateful weekend, Louella said she was in New York at the time – and Marion backed her up, albeit briefly. Far too many people, however, had seen them both boarding Oneida, so Marion quietly dropped the New York fairy tale. Nobody was about to push her on the issue anyway. After all,  Hearst was Hearst and people needed their jobs. When asked later why Hearst had chosen Louella over others to be his top Hollywood columnist, Marion replied that it was because only Louella had asked readers to ‘give Marion a chance’. Touching, but untrue. And with Marilyn decades later

She was not a good writer, but she embellished, exaggerated, even fabricated, as she saw fit. To get on her bad side took courage that few in Tinsel Town could muster. Conversely, if she gave an actor a ‘boost’, he or she had better remember they owed her a favour because sooner or later she would collect. It might be in the form of an ‘item’ about one of their friends, or it could be a ‘scoop’ on personal issues, engagements, weddings, babies, etc. And woe betide anyone who forgot to repay her. Similarly, it was of paramount importance to remember her (and Hedda) at Christmas time and their birthdays. Both columnists’ homes would be swamped with gifts, at Yuletide especially, each one accompanied by a sloppy message of affection. Sucking up was all part of keeping oneself at the top of the pile. Apart from her newspaper column Louella also hit the airwaves with her Hollywood Hotel Radio Show. Influence-wise this frumpy, semi-illiterate woman was second only to Walter Winchell in New York City. 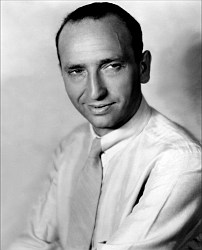 A small example of the kind of thing Louella might write can be found in a comment she made about singer Doris Day. In her column she announced that Doris insisted on tying her own shoelaces instead of letting the wardrobe department do it for her! Pretty riveting stuff. Well, it must have been for director Michael Curtiz anyway, for he immediately wrote in response: ‘Dear Louella, please accept my sincere gratitude for your generous and thoughtful story’. Ah, power is a wonderful thing!

Her feud with Hopper lasted for years, yet both women were similarly trivial, petty and bitchy. They both got things wrong, told lies, ruined lives, and generally made actors and actresses quake. Hedda was a racist, anti-communist, as vindictive as Hell – and she could not even type. Louella was a woeful speller whose hero was Benito Mussolini. Hedda was a former chorus girl with, reputedly, the best legs in New York. Louella had legs like tree trunks. Both women swore like mule skinners. In 1928 Parsons began hosting her own weekly radio program interviewing movie stars. On Hollywood Hotel stars would act out scenes from their upcoming movies. All these things went swimmingly until the studio system suddenly fell in a heap in the late fifties. She continued with her column until 1965, then handed it over to her assistant Dorothy Manners. In truth, Dorothy had been writing it for quite a while already. 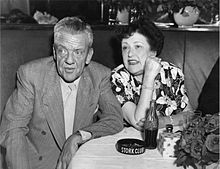 Louella married three times, the last of which was to a drunken surgeon named Dr Harry Martin in 1930, a man known to all as ‘Docky’. Several biographies state that he provided a steady source of gossip for her, given the number of abortions and treatments for VD he was required to carry out. She passed away in 1972 from arteriosclerosis at the age of 91. Hedda Hopper, her nemesis, had already gone in 1966.