Part 7 of ‘Accidental Deaths’ examines the passing of some performers who unintentionally killed themselves with pills, medication, drugs, alcohol, or whatever other substances they took in doses or combinations that ‘accidentally’ ended their lives. Some appear to be genuinely unlucky outcomes, but others would never have happened if the people affected had not been into drugs in the first place. For those in the former group I have nothing but great sympathy, but for the second group, well, they really have only their own stupid decision-making to blame. I also uncovered another motor vehicle death, so I have belatedly included it in this segment.

Bridgette, apparently, was extremely intelligent as a child, learning to read at age two and a half. Unfortunately, that intelligence seems to have taken a holiday when she entered her teen years as she allowed herself to become addicted to heroin. Movie fans will remember her charming performance in Savannah Smiles (1982), when she was just 7 years old. She only made nine movies, six of those being tele-movies, but she had the talent to go far until drugs and alcohol, often a deadly combination, claimed her at 22. For someone so bright – she died stupid.

Skye’s most remembered role (and her own personal favourite) was playing Mel Gibson’s daughter in The Patriot (2000). Her mother told CNN that the girl was suffering from epileptic seizures prior to her death, but the actual cause of her demise was registered as ‘an accident due to the combined effects of hydrocodone, difluoroethane and carisoprodol’. The first of these is found in painkillers, the second in muscle relaxants, and the third is an inhalant found in household products, often used to get high. Forensic scientists believe she was ‘huffing’ a deadly combination and later died in her sleep, but it has never been confirmed for certain.

Two months before he died from a drug overdose in 1982, John Belushi gave this interview to Rolling Stone magazine: ‘I don’t do more drugs than any other schmuck out there in the public. And uh…I liked doing it. I’m just noticed more than anyone else’. Well, no-one ever accused him of being a rocket scientist.  After doing different drugs all day, he threw a party at his residence on the eve of his death. Robin Williams arrived, but left quickly when he observed Belushi drifting in and out of consciousness. Robert De Niro snorted a few lines of coke, then he also left. Cathy Smith, a former back-up singer and girlfriend of Gordon Lightfoot, gave Belushi another speedball and went to bed. He was found dead next morning. Smith was later convicted of administering a lethal injection. Dan Aykroyd, his co-star in The Blues Brothers, led the funeral parade clad in black leather and jeans atop his Harley Davison. Farley was one those comedians that emerged from Saturday Night Live and achieved a modicum of success. On December 17, 1997 he hired a hooker for $2,000, partied with her; and then took her back to his apartment for sex. While she was there he got into difficulties, brought on by opiate and cocaine intoxication. His breathing became labored and he asked her not to leave him, but the woman walked out and left him to his fate. The 296 pound comedian idolized John Belushi. Both would die from drugs at the age of 33.

She was tiny (under five feet tall), the product of an unhappy home life, and the victim of a greedy, ambitious (for her daughter) mother and a wayward, homosexual father. Both her mother and her studio, MGM, got her hooked on ‘uppers’ and ‘downers’ as a young girl, just so they could get more and more working hours out of her. If ever a woman had a gilt-edged excuse for her drug addiction, that woman was surely Judy Garland. Her decisions were made for her at an early age, and by the time she was in a position to make her own decisions it was already too late. An accidental overdose of barbiturates claimed her in a London bathroom in 1969. She was just 47.

Being an enormous fan of the 1964 classic war film, Zulu, I have always harboured a soft spot for Nigel Green, the British actor who superbly portrayed Colour-Sergeant Bourne. Every boy I knew back in 1964 reckoned Bourne should have won a VC. After all, just about everybody else in the picture got one. I have since learned that the man could have been awarded one, but opted for a commission instead, but that’s another story (see my second book Movies Based on True Stories). As for the actor, Nigel Green, he died from what was deemed an ‘accidental’ overdose of sleeping pills in 1972. However, Peter O’Toole was convinced that Green was severely depressed when they made The Ruling Class that same year, and he believed the actor may have taken his own life. Nevertheless, the authorities ruled ‘accidental death’, so we shall go with that. Western Australian Heath Ledger promised to become the biggest movie star to come out of Perth, even bigger than Judy Davis, surely bigger than Sam Worthington, yet it all ended prematurely with a mixture of sleeping pills, painkillers and anti-anxiety medication in a room in New York City in 2008. Police said they found six bottles of medication in his Manhattan apartment, and that death was definitely accidental. What a tragedy. He only made 18 films, but managed to pick up an Oscar (albeit posthumously) for his portrayal of The Joker in The Dark Knight (2008), his next to last movie.

San Francisco-born Bruce Lee was considered to be the greatest exponent of martial arts in the 20th century. But he was much more than just a skillful proponent of the art. He had genuine charisma and the movie camera adored him. As a specimen of the human race he was extraordinary, a man able to do push-ups on one finger, or with a 250 pound man on his back, yet he only weighed 138 pounds when he died. He mastered the ‘one-inch punch’, a devastating blow that traveled just an inch before striking his opponent. His reflexes were such that he could snatch a coin from someone’s hand (even exchange it for another coin) before that person could close his fist. For such a man to die simply from taking a head-ache tablet is almost unthinkable, yet the official finding was that death came ‘from a cerebral edema, caused by a reaction to the tablet.

Chris Pettiet played Zach, the budding young chef in Don’t Tell Mom the Babysitter’s Dead (1991). He also had a smallish part in the Patrick Swayze/Keanu Reeves action thriller Point Break (1991), and portrayed Jesse James in the short-lived TV series The Young Riders (1991-2). Successful actors Tobey Maguire and Leonardo DiCaprio were close friends, but the young actor had a drug problem that he refused to acknowledge or address. Two months short of his 24th birthday he accidentally overdosed.

I have written rather extensively on River Phoenix already in this sit, so I will not go over old ground, except to say that his pointless death from an overdose of cocaine and morphine was yet another example of a supposedly intelligent human being, imbued with gifts that most of us can only hope to have, throwing it all away. Senseless.

Medically speaking, Elvis died from ‘cardiac arrhythmia’, but his condition and death at just 42 were hastened by the huge amount of drugs he was taking. In 1977 alone, his personal physician, a man known as ‘Dr. Nick’, prescribed at least 10,000 hits of amphetamines, barbiturates, narcotics, sleeping pills, tranquilizers, laxatives and hormones for ‘the King’. The good doctor had his medical license revoked because he prescribed such enormous amounts, but the damage had been done. An autopsy revealed a total of fourteen different drugs in Elvis’s bloodstream. Again, I have already wasted enough words on this stupid man. I read somewhere that he made a plea to his fans: ‘If you’ve never tried drugs, DON’T. And if you have, pray.’ Very profound. He should have added: ‘And if you are born with a functioning brain and you choose not to use it, then you get what you damn well deserve’. He died from a heroin overdose, presumed to be accidental. 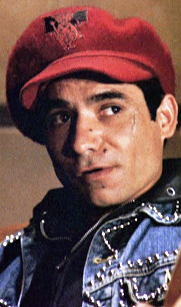 Mexican-American actor Trinidad Silva played Frog, the older gang leader in the controversial gang war film Colors (1988). For the six years prior to making this picture, he had appeared regularly on the TV series Hill Street Blues, playing a Chicano gang leader named Jesus Martinez. On 31 July 1988 his promising career and his life came to an abrupt end when a drunk driver raced through a red light at an intersection and slammed into his pick-up truck. The impact threw the actor head-first onto the pavement 100 feet away and he died instantly. The other driver was unhurt and attempted to flee the scene before being caught and held by onlookers until the police arrived. Silva was 38.