My previous post dealt with Australian actors who have achieved international recognition. There were a lot of fine performers on the list, but two of them (one male, one female) have already enjoyed exceptional careers, and seem set to go from strength to strength for many years to come. They are such outstanding professionals that I thought they should have a separate posting all to themselves. I do not recall a single movie performance by either Cate Blanchett or Geoffrey Rush that was in any way mediocre or dull. They choose their material carefully and always give polished performances, the equals of any movie actors in the world today.

Cate was born to an Australian mother and a Texan father in 1969 in Melbourne, Victoria. After graduating from the National Institute of Dramatic Art (NIDA) in 1992, success seemed to come to her instantly and effortlessly, although I am sure she worked incredibly hard at her craft. Awards came to her in quick succession and she made her feature film debut in 1997 in Paradise Road. Within a year she was not only married to writer Andrew Upton, but starring in Elizabeth (1998), winning a Golden Globe for her performance and garnering an Oscar nomination for it along the way. Unbelievably, Gwyneth Paltrow won for Shakespeare in Love that year, not that it mattered overly much, for Cate was nominated a further four times between 2004 and 2014. During that time she picked up a Best Supporting Oscar for The Aviator (2004) and a Best Actress Oscar for Blue Jasmine (2013). She was quite philosophical about losing in 1998 anyway: ‘…who wants to peak when they’re 28?’ she said.

as Kate Hepburn in The Aviator

Back home in Australia, long before she gained fame, Cate was the original ‘Tim Tam’ girl in a series of TV ads promoting that particular brand of chocolate biscuits. When asked if she had ever appeared in the enormously popular TV series Neighbours, she indignantly replied, ‘Absolutely not. I’m an actress!’ Good point, although her response no doubt alienated the legion of performers who have appeared on the show down the years, not to mention the even bigger legions of fans it has somehow accumulated. She is also, unashamedly, a Gough Whitlam fan. The former Prime Minister of Australia, a man flawed in many ways in my opinion, was, nevertheless, the creator of free tertiary education (among a series of reforms that greatly improved social opportunities for women in Australia in the 1970s), while he was briefly in office, something that Cate benefited from personally. She spoke highly of him at his state memorial service this year.

She was all set to play Anna in Mike Nichol’s wretched Closer (2004), but the part went to Julia Roberts instead after Cate became pregnant with her second child. I have often criticized the Catholic Legion of Decency for its over-the-top criticism of movie-making in general, but if Closer is an example of what can be classed as ‘art’ in the movie business today, then I might belatedly start embracing the CLOD or cease watching films altogether. Patrick Marber’s vile script was (of course) nominated for both a Golden Globe and a BAFTA Award, but missed out on both. Good.  Before shooting even commenced on Closer, Natalie Portman gave Roberts a necklace with the word ‘cunt’ engraved on it. How sweet. When shooting completed, Julia gave her one back that bore the equally witty inscription, ‘Li’l cunt’. Just a bit of old-fashioned, good, clean fun from two fellow thespians, and so clever too. The two ladies were acknowledging the foul mouths their characters were lumbered with in the script, not that this seemed to concern either actress too much. Otherwise, they would have been elsewhere shooting something else. Needless to say, the critics tripped over each other in their haste to praise this garbage as some kind of masterpiece. Well, it isn’t. in The Missing with Tommy Lee Jones

Ever since Tom Cruise came skidding into his folks’ loungeroom in his shirt-tails, miming to Bob Seger’s ‘Old Time Rock & Roll’ in Risky Business (1983), quite a few sit-coms and romantic comedies have inserted a similar sequence into their scripts, getting their stars to mime or dance to a catchy pop song or two. Julia Roberts did it twice (in Pretty Woman (1990) and 1991’s Sleeping with the Enemy), Matthew Broderick rather lamely mimed ‘Dankeshoen’ and ‘Twist and Shout’ in Ferris Bueller’s Day Off (1986), and Cate mimed to Bonnie Tyler’s 1984 hit ‘Holding Out For a Hero’ in Bandits (2001). I admit to being biased, but I thought she was terrific in the sequence. She also demonstrated a genuine flair for comedy in the picture, displaying her versatality for all to see. Queen Elizabeth one minute, Bonnie Tyler the next. Wonderful. Two years later she even took on a western, (The Missing, with Tommy Lee Jones), and was excellent in that too.

in Bandits (‘Holding Out For a Hero’)

On May 13, 2015 Cate was asked by Variety magazine if her upcoming role as Carol, a lesbian, in a film of the same name, was ‘her first turn as a lesbian?’ ‘On film or in real life?’ she asked. When her interviewer inquired whether or not the 45 year-old actress meant she had, perhaps, had relationships with women in the past, she replied, ‘Yes, many times’. And that is where the conversation ended, Cate not elaborating beyond her confirmation that she did indeed have a bisexual past. Carol is based on the Patricia Highsmith novel The Price of Salt. I truly hope the media does not feast on such an inconsequential detail about this extraordinary actress. I would much rather hear of her next acting enterprise, for it is bound to be brilliant and well worth watching. 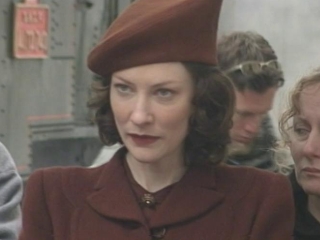 Supporting Oscar for The Aviator (2005)

Three Golden Globes for Elizabeth, Blue Jasmine and I’m Not There (2008).

Queenslander Rush’s screen success did not come without a tremendous amount of effort, patience and determination. Indeed, many of us tend to think successful acting careers happen through a combination of luck, fortunate timing, knowing the right people, and being in the right place at the right time, yet this is rarely the case. Usually, success comes after years (even decades) of trial and error, rejection and disappointment, and gaining valuable but time-consuming experience. Take Geoffrey Rush for instance. After graduating from university in 1971 with a BA in English, he pursued a stage career, beginning with the Queensland Theatre Company when he was 20. He even spent two years in France (1975-77), enrolling in the Jacques Lecoq School of Mime, Movement and Theatre along the way. Later, he returned to Australia for more stage work, acting alongside another unknown, Mel Gibson, in Sydney. The two men even roomed together for a while. By the 1980s he was appearing in productions for the State Theatre Company of South Australia, his great range showing in several acclaimed performances and a lot of directorial stints, yet his lack of advancement in his chosen profession, combined with sheer overwork, finally led to a nervous breakdown in 1992. Not one to surrender to setbacks, he returned to the stage after a time and continued to impress with the sheer class and power of his performances, until the role of a lifetime came along. The opportunity to play David Helfgott in Shine in 1996, at last won him recognition at the highest level, winning (among many awards) an Oscar and a Golden Globe. Rush needed no stand-ins for the piano pieces either. He played them all himself. After 25 years of honing his craft he had become an internationally respected actor, and one capable of inhabiting an enormous range of historical characters. His Walsingham in Cate Blanchett’s Elizabeth (1998) is my favourite, although he is equally impressive as the Marquis de Sade in Quills (2000), and as Trotsky in Frida (2002). In 1998, to everyone’s delight, he proved his comedic talents in Shakespeare in Love, and has since had huge success (and made a fortune) playing Captain Hector Barbossa in the Pirates of the Caribbean franchise.

as Captain Barbossa in ‘Pirates’

Earlier this year he joined with a number of Australian actors, endeavouring to convince Australian PM Tony Abbott to personally intervene with President Widodo of Indonesia over the intended executions of two drug dealers holding Australian passports. The ‘Save Our Boys’ campaign produced a short film featuring several well-known stars besides Rush. These included Bryan Brown, Guy Pearce and Brendan Cowell, and called on Australians to film their own messages of protest over the intended executions. They also called on Mr Abbott to ‘be a leader’, ‘get to Indonesia’ and ‘bring them home’. Cowell went one step further in a direct appeal to the PM: ‘Tony, if you had any courage and compassion, you’d get over to Indonesia and bring these two boys home – show some balls’. I am no fan of Tony Abbott, but what exactly did Cowell expect him to do, physically bust these criminals out of prison? Or should he have threatened to withdraw Australian aid to Indonesia’s poor, dismantle our trade agreements, pull our ambassador out of Jakarta (which we stupidly did anyway), or, if nothing else worked, break off diplomatic relations, even go to war over two men who were completely aware of the penalties when they plied their rotten trade in Indonesian territory? In spite of these pleas from dozens of celebrities and supporters, the two men were eventually executed anyway. Mr Rush explained his position to the media, saying simply, ‘I’m an Australian and I stand for mercy.’ Evidently, he does not believe anyone should be executed, regardless of their crime or crimes. A lot of Australians would disagree, and I am one of them. Even though history has shown that application of the death penalty has little or no effect as a deterrent; that is beside the point in my opinion. Certain crimes are a blight on society, and dealing in hard drugs is high on the list. Drug traffickers, paedophiles, terrorists and serial killers should not expect mercy when they themselves unreservedly deal in misery and death. As of May 2015, Rush has won the following prestigious awards for his performances: