I have picked out a half dozen Alfred Hitchcock films for quick examination. I liked the first one a lot (despite its many errors), the second one was enjoyable also, but the other four I found to be both dull and amateurish, with performances from some of their stars that were just plain poor. You might disagree, of course. Most fans of Hitchcock probably will.

This is one of Alfred Hitchcock’s better movies, in my opinion, possibly his best. For reasons I personally find unfathomable, critics rave about Hitch (and Woody Allen, for that matter), deeming them to be directors of legendary status. I just cannot see it. North by Northwest is an enjoyable film, however, but that is due mainly to the chemistry between the two leads. Cary Grant is his usual debonair self and Eva Marie Saint is as sexy as ever. Their conversations on the train are equalled for innuendo only by Bogart’s and Bacall’s in The Big Sleep and To Have and Have not.

Hitchcock, as a director of so-called legendary status, tended to miss a few things in post-production as well as on the set. For instance, the shooting scene in the cafeteria at Mount Rushmore has a classic ‘error’ that is very noticeable indeed. Clearly, the scene had gone through several rehearsals before the usable sequence was completed, because as the stars near the moment when shots are about to be fired, a little boy at a nearby table puts his fingers in his ears seconds before the gun is even drawn. How Hitchcock missed that is mystifying.

Another mistake occurs in Grant’s dialogue delivery at the hotel room while he is talking to his mother. He mentions ‘our man who’s assembling the General Assembly’, when what he meant to say was, ‘our man who’s addressing the General Assembly’. Either Hitch or his editor should have noticed the error before the film went into print, yet it slipped by. Later, Grant bribes the clothes off a scrawny, little, old porter, and they fit his 1.87m frame perfectly, a basic, needless error evident to viewers immediately, but not to Hitchcock it seems. Later still, as Leo G Carroll walks with Grant towards the airplane, he urges him along, saying, ‘I do wish you’d walk faster Mr Thornhill, or we’ll miss our plane!’ Then he stops, not once but twice, to chat about plot issues for several minutes. Maybe, I am being ‘picky’, but if the term ‘legend’ is to be used to describe someone, a level of perfection must surely be a requisite.

The original working title for the picture was the rather lame, In a Northerly Direction, but it was changed after a while to North by Northwest, although that, too, was never intended to be the final name of the movie. It had absolutely nothing to do with the plot, nothing whatsoever, yet somehow it stuck and stuck. Hitchcock and screenwriter Ernest Lehman always assumed they would come up with something better, but they never did. Technically speaking, there is no compass direction called north by northwest anyway. Even so, the movie has a great many good moments, although Cary’s drunken drive down the hill definitely ain’t one of them. James Mason is always good, and Martin Landau was just starting out on his journey to acting excellence.

The film’s title is derived from the old proverb, ‘set a thief to catch a thief’. The ‘mystery’ is about as transparent as a pane of glass, but who cares? It has the effortless charm of Cary Grant, the picturesque scenery of the Riviera, and the luscious Grace Kelly to look at. The scene where she turns at her hotel room door and passionately kisses Grant is worth the price of admission alone (or the cost of the DVD). Every once in a while there comes along a moment in movies that is bound to become timeless cinema history, and that has to be one of them. In my opinion, I cannot recall any woman, in all the thousands of pictures made, that has ever looked so utterly beautiful and fetching as the future Princess Grace of Monaco in that scene. No wonder Prince Rainier chose her over Marilyn Monroe. Grace Kelly in To Catch a Thief

Just about every critic in movie history describes this movie as a ‘classic’, the ultimate ‘scary’ picture. I have always found it too slow. And as for the final scene, well, today it looks positively amateurish to me. The really brilliant element in Psycho is that shrieking violin! Bernard Herrmann’s score is as effective as John Williams’ score for Jaws, and involves about as many notes. Both are perfect for what they are supposed to do – scare the knickers off the audience.

Not everyone in Hollywood liked the picture, of course. Walt Disney positively hated it. In fact, in the sixties, he refused permission for Hitchcock to film in Disneyland because he had ‘made that disgusting movie Psycho’. Most fans acknowledge that the ploy of having his leading lady killed off early in the movie was a masterstroke that took everyone by surprise, but Hitchcock kind of revealed something might happen to her by placing the picture’s biggest name star, Janet Leigh, at the end of the credits. This is another Hitchcock ‘thriller’ that leaves me cold. For me, the protagonists look about as scary as a cage full of quail. Furthermore, some of the sequences and effects are really poorly done. For instance, the bit where the schoolchildren are attacked. It is painfully obvious that they are running on a treadmill with the Bodega Bay scenery added into the background. And again, the crows (mostly puppets) are about as frightening as a bowl of blancmange. Hitchcock disliked filming on location, and would shoot as much footage as possible in the studio on-set. And it shows. About the only plus I found in this movie was the presence of Rod Taylor. Tippi Hedren in The Birds

War photographer Robert Capa and major movie star Ingrid Bergman had a lengthy affair during the Second World War, and Hitchcock used this as a premise for the Jimmy Stewart – Grace Kelly romance in this picture. I, personally, always felt the ‘hero’, played by Stewart, lacked a bit of class for my taste. After all, he was using his telephoto lens to spy on his neighbours, the sleaze-bag! Jimmy Stewart or not, the guy was a lousy peeping Tom, no two ways about it.  It has been stated by numerous sources that Hitchcock often spied on his leading ladies late at night, using a telephoto lens himself. Perhaps, he felt there was nothing remiss in the practice.

Like most of Hitchcock’s movies, this one is slow. Grace Kelly made three for him, Rear Window and Dial ‘M’ for Murder, both in 1954, and To Catch a Thief in 1955. She said her favourite was this one. I thought she looked pretty special in Rear Window, but To Catch a Thief was faster-paced than the other two. Grace nearly always slept with her leading man, and she genuinely found Stewart to be ‘one of the most masculinely attractive men she ever met’, but he might just have been the ‘one that got away’, for there is no evidence at all that he succumbed to her charms. He is, however, quoted as saying, ‘Everybody just sat around and waited for her to come in in the morning, so we could just look at her.’ Amen to that.

Hitchcock liked to use James Stewart in his pictures. I believe he felt that Jimmy had that ‘guy next door’ look about him, perfect for the ‘innocent man mistaken’ theme of some of his movies. He used him in Rope (1948), Rear Window (1954), The Man Who Knew Too Much (1956), and Vertigo. I thought Rear Window the best of the bunch, but it did not have a lot to beat, in my opinion. Then again, I have never thought much of Stewart as an actor to be honest. All that quivering bottom lip, tears welling in the eyes, the quavering, breaking voice, and that damned stuttering drove me up the wall. In Vertigo his portrayal of a man suffering from a fear of heights was completely overdone, laughable really. And the picture was boring beyond belief. Sorry, Alfred. Another dud.

Of course, Hitchcock made scores of movies over his career, many of them when the industry was in its infancy. It is always somewhat unfair to compare what happens today with what happened yesterday. Who knows how effective his movies might have been had he been able to employ today’s special effects and CGI, for instance? What would Cameron’s Titanic have looked like if it had been made in 1960, when Hitchcock made Psycho? Perhaps, for the times, Alfred did some good work, but I would hate to compare, say, Vertigo with Double Indemnity, made 14 years earlier. Come to think of it, I can compare them – and there is no comparison. Double Indemnity is streets ahead – and it was directed by Billy Wilder. Now he was a legend. 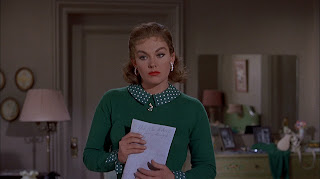