After 7 December 1941 a lot of things changed forever in America. Until that day, for example, Americans could wander about the grounds surrounding the White House at will. Tourists would often peer in through the windows, hoping for a glimpse of the President or a family member. A high security fence was built on the edge of the grounds after Pearl and has been in place ever since. Anybody found inside it today runs an excellent chance of being shot first and questioned later.

A baseball game in Los Angeles between the Paramount team and the Japanese-American LA Nippons was in its third innings when the news came over the radio that Japan had attacked the US Pacific Fleet at Pearl Harbor, Hawaii. Movietone newsreel cameraman Al Brick was in Honolulu when the attack came and he took a lot of footage of it. Most of it was too graphic and demoralizing to be shown in American theatres. Meanwhile at home, the people were incensed, outraged over the attack. The entire nation reacted as one, galvanized into action and eager vengeance. 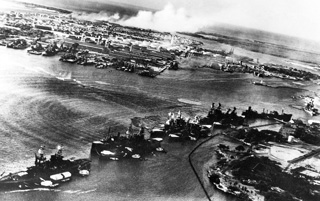 The government reacted as most governments do when a military disaster takes place. It went searching for heroes and it found plenty. No fewer than fourteen American naval personnel were awarded the Medal of Honor for their actions on that fateful day at Pearl. Perhaps, the most famous individual effort came from a black mess attendant aboard the USS West Virginia, a man with the unfortunate name of Doris Miller. ‘Dorie’, as he understandably preferred to be called, won the Navy Cross, the navy’s equivalent of the Medal of Honor. During the attack he rescued several wounded men, went to the assistance of his mortally wounded commander, and then manned an anti-aircraft gun (a weapon he had never even been trained on). He even shot down at least one of the attacking aircraft. A hero in every sense, he only lived another 23 months. In November 1943 he was lost when a Japanese submarine torpedoed his ship. 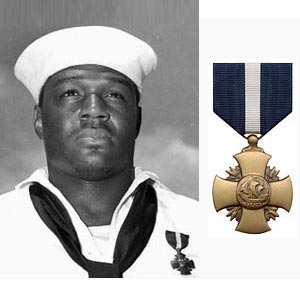 A high percentage of the 68 civilians killed in the attack were victims of anti-aircraft shells falling in the town from US vessels in the harbor trying to fend off their attackers. Almost half of the 2,403 American fatalities were aboard the USS Arizona. Most of its 1,102 dead still lay entombed in its hull. President Roosevelt immediately decided to launch a retaliatory strike on Tokyo. American B-25 bombers were launched from the deck of the USS Hornet in what became known as the Doolittle Raid.

Eight American flyers were captured by the Japanese after the raid. Tried in Shanghai, China, in October 1942, all eight were sentenced to be executed. For some reason, three were shot the next morning, but the other five were granted a Royal commutation to life in prison. One of the five died from illness and mistreatment in 1943. The surviving four were liberated in 1945. The story of these eight men became the subject of the 1944 movie The Purple Heart. Another ‘detail’, overlooked by most movies on this subject, is the horrific treatment meted out to Chinese civilians in the coastal area where most of Doolittle’s bombers crash-landed after the raid. Over the ensuing three months an estimated two hundred and fifty thousand men, women and children were killed by 100,000 Japanese troops sent into the area to teach them a lesson.

Whilst on the subject of the Pacific War, it is interesting to note that the Soviet Union declared war on Japan two days after the Americans dropped the atomic bombs on Hiroshima and Nagasaki. Knowing that Japan was about to surrender, such a declaration by Stalin ensured a slice of the spoils for the Soviet Union, without his country firing a single shot in anger against the Empire of Japan. It is worth noting that the bombs dropped on Japan were originally intended for Nazi Germany had it not surrendered when it did.

When it comes to discussing the Japanese attack on Pearl Harbor in December 1941, the question arises concerning whether or not President Franklin Delano Roosevelt allowed it to happen. It is an interesting question, but it begs the response: ‘Why on Earth would he do that?’ The most proffered reason is an intriguing one. Hitler was clearly winning the war in December 1941, and was poised to invade Britain, the last bastion to be overcome in Europe. Roosevelt knew this, of course, and was gravely concerned that he would not stop there. He was after world domination, so an attack on the USA would only be a matter of time. Both Churchill and Roosevelt desperately wanted America in the war before Britain was knocked out of it, but the American people were dead against any involvement in what they regarded as a European conflict. If Roosevelt was to get his country into the war, there was only one way to do it, and that was by retaliating to an attack on the USA by someone else. What absolutely mortified Roosevelt was the distinct possibility, probability more likely, that Hitler would deliver an ultimatum to Great Britain. In return for not bombing her cities into oblivion, he would demand the British hand over the vast Royal Navy and its even vaster merchant fleet intact to Germany. Apart from a few pocket battleships and his submarine fleet, Hitler had no navy to speak of. And if he was to challenge the USA he needed one.

Roosevelt had already been stepping up diplomatic pressure on the Empire of Japan, by insisting she withdraw her troops from Manchuria. He knew full well that the Emperor would never accede to such a demand because he would lose face. Yet Roosevelt insisted. Next, he froze Japanese assets in America, and followed that decision by having the US Fleet ‘show the flag’ in Japanese waters. Each of these steps could be construed as deliberate goading of the Japanese, part of a policy to push them into acting as a matter of self-preservation.

The big question, of course, is: ‘Would he deliberately expose his Pacific Fleet stationed at Pearl Harbor to a possible sneak attack? One thing he did know was that if war between America and Japan broke out, it could ultimately end in just one way, total eventual victory for the USA. Even the Japanese knew that. Admiral Isoroku Yamamoto, the man who devised the attack plan for Pearl, had no illusions about that either. As far as he was concerned Japan’s only hope of victory was to deliver such a massive initial blow at Pearl Harbor, that the Americans would be compelled to sue for peace, giving Japan breathing space to acquire the oil it needed for its war machine from its Pacific neighbors. He knew, having spent time in the USA, of that nation’s enormous industrial might, its ability to produce war materials on an unprecedented scale. Conspiracy theorists would argue that Roosevelt was willing to risk his battle-wagons in Pearl, providing his carriers were away at sea on the day. Great damage was done on Battleship Row, some vessels were lost, but most were repaired and ready for action within a few months – and the carriers were all safely at sea. Planned or fortuitous? One thing is certain; Japan and America’s entry into the war was a Godsend for Churchill and the British. It definitely helped the Allies win the war, although Hitler’s insane decision to turn on the Soviet Union was quite possibly even more of a factor. The two combined were more than enough to ensure an Allied victory.

Once again, as so often happens in history, it comes down to the option – conspiracy or cock-up? Did Roosevelt and Churchill conspire to get America into the war the only way they could? Or was America caught with its pants down through military and political bungling on a major scale? If the latter was indeed the case, then we must accept that all that bungling just happened to win the war for our side. Most fortunate indeed. If you do not believe in providence smiling down on us at precisely the right time and in just the right way, then you must accept that people were deliberately sacrificed as a means to an end.