It all depends on your age group, I suppose, but most guys from mine seem to be in agreement that Ava Gardner was the sexiest woman ever to appear in American movies. Given the likes of Sophia Loren, Elizabeth Taylor, Marilyn Monroe, Brigitte Bardot and a couple of hundred more from the studio era alone, that is a pretty tall claim, but the camera certainly loved her. And so did we. She hailed from a tobacco plantation in Grabtown, North Carolina, a southern girl from dirt poor roots who spent her childhood barefoot and surrounded by labourers who taught her every swear-word known to American man, and then some. Throughout her life Ava swore like a ‘navvy’, not that this was a rarity in Hollywood, especially among the womenfolk. Her first films were really just ‘appearances’ accompanied by a solitary line of dialogue. She never did learn acting as such, although over the years she became quite accomplished in the art. I always wonder about that. I mean, learning lines, overcoming stage fright, sounding and moving naturally, and projecting emotion and confidence on screen, all sounds frightfully difficult to me. But how difficult is it really, when so many sons and daughters of stars also become stars, even winning the highest accolades in the process? Siblings, too. Is it a heredity thing? Are great actors born with the genes of greatness already in them? Frankly, I doubt it. In Ava’s case that entire argument becomes moot. Nobody cared if she could act or not. At age eighteen MGM gave her a simple screen test. All she had to do was walk towards the camera, turn and walk away, then arrange some flowers in a vase. She was not to speak, primarily because her southern drawl was barely comprehensible anyway. The footage was sent to L B Mayer at head office. His telegram response has since become Hollywood legend: ‘She can’t sing, she can’t act, she can’t talk. She’s terrific!’ And indeed she was. Mayer signed the teenager at once, immediately sending her off to speech school to get rid of that horrendous drawl. It would take five years of bit parts before she hit it big with The Killers in 1946. She had only been in Hollywood about a year when she met the industry’s number one box-office star, the diminutive Mickey Rooney. It was 1941. By January 1942, nineteen year-old Ava was married to 21 year-old Mickey, a match that was not made in heaven. Her husband, popular world-wide as Andy Hardy in a series of family films, was a serial womaniser. MGM head L B Mayer had already read him the riot act years before when 16 year-old Mickey was engaged in a full-blown affair with Irving Thalberg’s widow, the thirty – something Norma Shearer. By 1943, Ava had divorced the little star, fed up with his continued adultery, but willing to keep quiet about it to save his career. Why anyone would cheat on Ava Gardner mystified us then as it does today! It was tantamount to owning the best restaurant in town and sneaking off to steal a Spam sandwich. I never thought Mickey was all that bright after that. 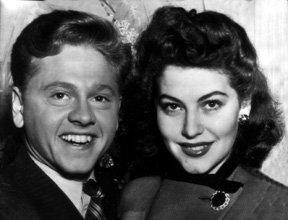 In truth, the marriage was doomed from the beginning. Still a virgin on her wedding night, she was terrified, but soon found she quite enjoyed herself and looked forward to a repeat performance in the morning. Rooney had more important things to do. He went off early to play golf! They divorced sixteen months later. In his autobiography he ungallantly chose to describe his wife’s privates in great detail, which we won’t go into here. While she worked hard each day on her lessons at the studio and looked forward to a quiet evening at home, Mickey dreaded such evenings. ‘I went nuts sitting around’, he wrote. ‘I had to have people around. Action. I dreaded those long evenings at home’. Ava, on the other hand, became bored with parties night after night, but that would change in years to come. Another problem was Mickey’s insane jealous streak. A man who cheated on his beautiful wife regularly and without remorse, could not abide another man even looking sideways at her. At one of their parties he flew into a rage when he saw the quiet, ineffectual actor Tom Drake dancing with her, even though everyone (including Rooney) knew that Tom was gay and not the slightest bit interested, sexually, in any woman. Ava’s parting words to her husband prior to their divorce were, ‘You know Mick I’m damn tired of living with a midget’. They met again briefly on the eve of his being sent overseas in the army (as an entertainer, not an infantryman I might add). The next morning he asked her if she would marry him again. Ava promised to wait until the war was over, but she soon broke her promise. By then she was with rampant billionaire Howard Hughes anyway. About the only females that didn’t sleep with him were Mother Teresa, Queen Elizabeth and Minnie Mouse!

Husband number two was bandleader Artie Shaw, a self-confessed, ‘very difficult man’, who lived to be 94, accumulating (and discarding) eight wives along the way. Three were actresses of note, Ava, Lana Turner and Evelyn Keyes. The unions with Ava and Lana did not last a year, both women attesting to his extreme emotional and verbal abuse. It even caused Turner to suffer a breakdown. Ava just walked out on him. An utterly opinionated, intellectual snob, Shaw once berated her for reading the best-selling novel Forever Amber. She laughed out loud a few months after their divorce, when she read he had just married Kathleen Winsor, the book’s author!  Ava dallied in her on again – off again relationship with Hughes, until he dislocated her jaw and started bugging her car (not necessarily in that order). The big love of her life, however, was singer Frank Sinatra. They fought like cat and dog, but they were crazy about each other. In 1953 Ava made Mogambo, a remake of the 1932 picture Red Dust that was shot on location in Kenya. Both versions featured the same leading man, Clark Gable, a most unusual occurrence considering they were made twenty years apart. Ava and Sinatra were having marital problems, so she tried to take up with Gable again on the set, (they had been lovers before), but he had tired of her and moved on to his other co-star Grace Kelly. When she learned that a few of the locals complained about her nude shower sequence in the film, Ava responded by stripping naked and running through the village in front of the entire crew and the African extras. Then she took another nude shower, this time out in the open, in front of everyone. She was lots of things, but shy wasn’t one of them. Ava’s main problem was she hated to be alone. On location, wherever it was, she would invite stuntmen, directors, even key grips back to her tent to drink and, as often as not, to have sex with her. And Sinatra knew this, for he was just as promiscuous. The marriage ended when she began getting involved with Spanish bullfighters (several of them) in Madrid. In the 1960s she started an affair with actor George C Scott, but he beat her badly once too often and she left him. Sinatra threatened to have his Mafia pals break George’s legs. In the end Frank settled for them giving him a very firm warning – give her up or else! Scott walked away and Ava went back to Spain. Esther Williams recalled seeing her dancing the flamenco on a tabletop in Spain in the 1970s. ‘Ava was wearing a skirt that revealed everything’, she remembered. ‘She was not wearing panties. My heart went out to Ava and what she had become’. Around that time the Ritz Hotel in Madrid banned all movie people from its premises after Ava became hopelessly drunk and urinated in the ornamental fountain in the lobby and in full view of paying guests.

Twenty-two years before she died, Ava moved to London in order to save on her taxes and to live in relative seclusion. In 1990, she died from chronic lung disease and the lingering effects of a couple of strokes. She was only 67. Frank would live on for another eight years, forever haunted by the fact that, of all the millions of women in the world who would have him in an instant, the only one he ever loved could take him or leave him. And she had chosen to leave him. An Australian reporter probably summed up Ava Gardner better than anyone. After describing her language as ‘like a sailor and a truck driver were having a competition’, she threw a glass of champagne at him. He commented later that, ‘the only thing I could think was how bloody gorgeous the woman was.’ Amen to that.