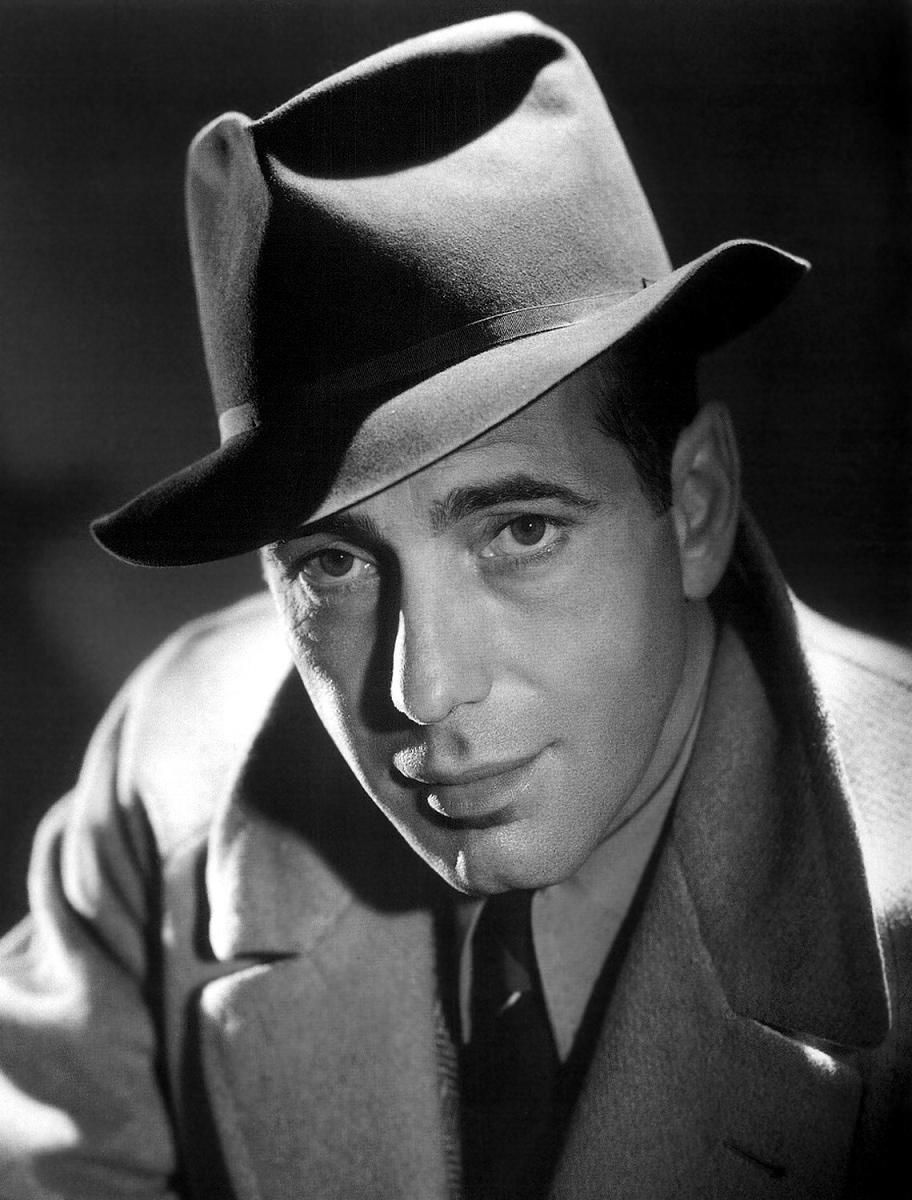 Humphrey was not born on Christmas Day 1899 as his studio liked to state. At least two 1900 census forms prove it. He was actually born on 23 January 1899, but the Warner Bros publicity department chose to run with the stupid tagline, ‘a guy born on Christmas Day can’t be all bad’, and the tale stuck. He was also, courtesy of her American relations, a distant relative of the late Diana, Princess of Wales. Or so it is said. I don’t know about this ‘distantly related’ stuff we seem to hear about all the time. It seems to me that, if we go back far enough, any one of us is bound to end up related to somebody of importance. I have read that Tom Hanks is a direct descendent of Mary Todd Lincoln, Abe’s wife. That Reese Witherspoon is descended from Declaration of Independence signatory, the Reverend John Witherspoon. The list is quite long. Before she died, my own mother was adamant that we were related to a very fine character actor in America named E. G. Marshall. Maybe, maybe not.

Critic Alexander Walcott wrote a review of one of Bogie’s early stage efforts which so tickled the actor that he carried it about with him for the rest of his life. It read: ‘The young man who embodied the aforesaid Sprigg was what might mercifully be described as inadequate’. Bogie mostly considered critics to be reasonably fair, with the singular exception of the one who wrote that a certain actor was bad in a certain part, ‘but not as bad as Humphrey Bogart would have been if he had played it’. In his early days Bogie played the ‘tennis, anyone?’ roles, as he called them. To playwrights, these juvenile characters were an essential part of any script. They enabled the writer to clear the stage of any characters not required in an upcoming scene. A young tyro, popping into a room and spouting, ‘tennis, anyone’ or ‘riding, anyone?’ would receive affirmative responses from those characters on stage who were not required in the next scene. And off they would all trot. The odds of a young Broadway actor rising to the dizzying heights of a movie star in those days were practically zero. Between 1921 and 1930 a total of 2,044 plays were produced in New York alone, yet just five young American stage actors made it to the silver screen. They were Bogart, James Cagney, Spencer Tracy, Clark Gable and Fredric March. It usually took a combination of endurance, tenacity, shrewdness, skulduggery, a willingness to do just about anything, and lots of luck to reach the top. A little talent and some good looks helped as well. A 2003 book by Darwin Porter, titled The Secret Life of Humphrey Bogart, makes some interesting claims about his private life long before his marriage to Lauren Bacall. According to Porter, and based on a manuscript penned by the actor’s friend Kenneth Mackenna, Bogie worked at some interesting sidelines at times. For instance, he was employed to procure male escorts for the bisexual Howard Hughes. He also took actress Jean Harlow to an abortion clinic when she became pregnant to the same Hughes. Hughes had enormous influence and Bogie was willing to bend the odd rule if it could help him gain a toehold in the industry. As he struggled for recognition he even slept with columnist Louella Parsons in order to get good press. From all accounts Louella was no oil painting, but sacrifices had to be made if a guy wanted a crack at the big time. Porter even writes of a ménage a trios featuring Bogie, his first wife Helen Menken, and swinging actress Tallulah Bankhead. Incidentally, bedding Tallulah was scarcely an achievement of note. She slept with anybody, young, old, good-looking or ugly, male or female. It was all the same to her.

Bogie was not a great actor, but when he appeared in a scene the audience’s eyes were drawn to him. Gary Cooper also had that quality. John Huston once summed it up as well as anybody. ‘Bogie was a medium-sized man, not particularly impressive off-screen, but something happened when he was playing the right part…I swear the camera has a way of looking into a person and perceiving things that the naked eye doesn’t register’. He may well be right. It would make for an interesting experiment were we able to place, say, Marilyn Monroe and Meryl Streep in a scene together, and give them alternate lines to speak. It would be fascinating to see who stole the scene – the charismatic star or the consummate actor. Personally, my eyes and ears would be on Marilyn every day of the week and twice on Sundays.

Bogie’s wife at that time he made Casablanca in 1942 was Mayo Methot, a small-time actress and big-time drinker. An obsessively jealous woman, once diagnosed as a paranoid schizophrenic, she accused her husband of having an affair with his co-star Ingrid Bergman during the shoot. It was quite untrue. In fact the two stars hardly talked to each other off-camera. ‘I kissed him but I never knew him’, was Ingrid’s assessment of their days on Casablanca. After the picture was released a reporter asked Bogie what he thought of the movie. ‘I don’t know’, he answered. ‘I wasn’t allowed to see it’. 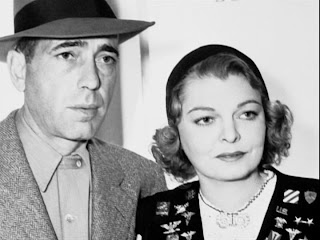 Although ‘the Battling Bogarts’ fought anywhere and everywhere, a couple of times things actually got a little more serious than usual. When Bogie announced he was going off alone on a trip, a drunken Mayo pulled a gun and threatened to shoot him there and then. He wisely fled into a bedroom, locked the door, and made a desperate phone call… to his publicist! A gaggle of studio employees soon gathered around the receiver to listen to the shouting match on the other end of the line. Eventually, an even drunker Mayo lost the plot completely and started shooting, emptying the revolver into her husband’s suitcase. Only then did he venture from his hiding place.

On another occasion Mayo came at him with a knife during yet another a drunken scene in their kitchen. As Bogie ran for the door, she sunk it into his back and he collapsed on the floor. Slipping in and out of consciousness, and with the knife still embedded in his back, he called his friend Sam Jaffe, and asked him to come to the house. ‘There is a bit of a problem’, he gasped. When Jaffe arrived he found his pal semi-conscious and Mayo rushing about, stricken with guilt, and shrieking, ‘I didn’t do anything! I didn’t do anything!’ Both incidents were kept out of the papers by Warners’ trouble-shooters. Their six-year marriage finally came to an end in 1945 when Humphrey fell in love with Lauren Bacall. Just six years later Mayo was dead from the effects of alcoholism. Her corpse lay undiscovered for several days in a third-rate hotel in Oregon. She was 47. In 1982, a book surfaced that blew the lid on the Bogart image, especially regarding his supposedly ideal marriage to Bacall. Titled Bogie and Me, it was written by his former wig-maker (he always wore a toupee in his movies), a woman named Verita Thompson. She claimed she met him at the wrap party for Casablanca back in 1942 when he was still married to Mayo. Thompson (she was then Verita Peterson) was married at the time as well. The couple began an affair that lasted until 1955, well into his last marriage to Bacall. Verita wrote of her astonishment when Bogie married Bacall just 12 days after divorcing Mayo. He could certainly keep a secret. Their affair continued for over a decade more. During that time she was often invited to the Bogarts’ home for dinner. ‘He pointed out that it would raise suspicions if I didn’t act as an employee of Humphrey Bogart normally would’, she explained. The book also claimed that most of the couple’s liaisons took place aboard his boat Santana. According to Verita, Bacall expressed an interest in sailing (Bogart’s great love), but it ‘declined after he slipped a ring on the third finger of her left hand.’ The affair ended amicably when Verita married producer Walter Thompson in 1955, just two years before Bogart died from cancer. She had worked on 14 of his last 18 movies and lived on until 2008.

All of Bogart’s pals drank. In fact, he often said he did not trust anyone who did not drink. When a reporter asked him if he had ever been on the wagon, he quipped, ‘Just once. It was the most miserable afternoon of my life’. A few years after his death, Lauren married brilliant actor Jason Robards Junior. He looked remarkably like her late husband to a lot of people, although she could never see the similarity. Unfortunately, Robards was also an alcoholic, and a nasty one at that, so the marriage faltered after eight years. Most of their acquaintances were surprised it lasted that long. Most fans of Bogart and Bacall (and there are plenty of them), are seduced by the chemistry they exuded in their first picture together, To Have and Have Not (1944). She was just 19 when they fell in love on the set. He was 44 and on his third marriage. Her sultry delivery of her famous ‘just whistle’ invitation is one of the great moments in cinema history. When Bogie was interred at Forest Lawn Cemetery in Glendale, Calfornia, in 1957, she placed an item in his coffin before it was closed. It was a small golden whistle.