Every so often a movie comes along that has the Hollywood crowd and the critics tripping over one other in their eagerness to shower it with honours. William Wyler’s 1959 epic Ben-Hur is one such picture. It was nominated for twelve Oscars and won an unprecedented eleven. Only Karl Tunberg’s screenplay missed out. The word had spread prior to the Oscars that Wyler considered it to be a load of rubbish, (the screenplay that is, not the movie), and that he had contracted Gore Vidal and Christopher Fry to rewrite the thing and to change the ending completely. Neither man was acknowledged in the credits, despite having done rewrites for a year, and they were far from pleased. Willy leaked the story to the press and Vidal told everyone he met (including cats and dogs) that he and Fry had been shafted. It must have worked because everybody associated with Ben-Hur kicked a goal except Karl. In all honesty, the movie itself is overblown and over-rated anyway. Then again, if you sleep with the Bible under your pillow and a crucifix over your bed, you might find yourself disagreeing with that diagnosis in its entirety. Your prerogative, of course, so knock yourself out.

I am not saying it is all rubbish, because it does have its moments, but really – eleven Academy Awards? Speaking of great moments, it actually contains my favourite piece of movie dialogue. And it consists of a single word! Judah is informed by Messala that he has been condemned to the galleys, and he’s not happy about it. ‘I pray that you live until I return’, he vows. Messala’s one word response drips with irony. ‘Return?’

Stephen Boyd as Messala in Ben-Hur

Incidentally, both the Roman and Greek navies preferred free men doing the rowing in their galleys, although in times of manpower shortages prisoners of war were sometimes utilised. Galley slaves did not really come into existence until the sixteenth century and were pretty much gone by the end of the eighteenth. If history, therefore, is any guide at all, Judah may well have been the only condemned galley slave in the entire history of the Roman Empire. How unlucky can you get?

Chuck Heston positively stole his Best Actor Academy Award. The guy was sensationally good at portraying a block of granite, but anything else was a bit of a stretch. For example, just about every actor worth his or her salt can cry on cue, but not Chuck. In exasperation, Wyler ultimately gave up and told him to just put his hands over his eyes and make sobbing noises. Stephen Boyd’s performance, on the other hand, was terrific, yet he was not even nominated. The Golden Globe people seemed to understand the acting profession a lot better, however, and he picked up a GG as Best Supporting Actor. Heston was nominated for the Best Actor Golden Globe – and lost.

Charlton Heston in the title role

Confessed atheist Burt Lancaster turned down the title role because he did not like the ‘violent morals’ of the story. Nor did he wish to promote Christianity, he said. Paul Newman’s reason for declining was less profound. He said his legs were too skinny to wear a tunic. Having sat through his diabolical 1954 film The Silver Chalice, I can readily understand his feelings. Even Rock Hudson was offered the part of Ben-Hur before Heston, and he also said no. Leslie Nielsen actually tested for the role of Messala but missed out to Stephen Boyd. Personally, I would love to sit back today and watch ‘Frank Drebin’ driving a chariot in the big race! Stewart Granger’s agent convinced him not to play a supporting role to Heston (too demeaning), so he also declined the opportunity to play Messala.

Stephen Boyd was at the height of his popularity, especially with members of the opposite sex, when he landed the role of Messala. In fact, he fondly recalled Brigitte Bardot once asking him to marry her. ‘I don’t know if she was joking, but I said no. I did not explain that I couldn’t marry an actress who could never be faithful to me. Or at least try. Like, I would at least try, for the first year or two’. It is generally not well known that, on the strength of his performance here, he was offered the role of James Bond in Dr No before anyone else. He wasn’t interested. Who knows, if he had accepted it, Sean Connery may have remained a ‘nobody’? Boyd was, however, very keen to play Marc Antony in Cleopatra, but production delays forced his withdrawal. Like several of his fellow Caucasian co-stars who played Romans in Ben-Hur, he was forced to wear contact lenses that made his blue eyes appear brown. 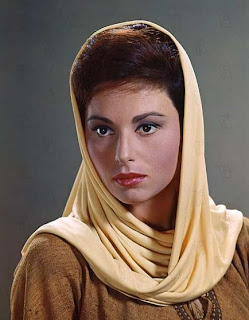 Haya Harareet as Esther in Ben-Hur

The stunning Haya Harareet was chosen to play Esther. Unfortunately, her career ceased almost as soon as it started. Born in Haifa, Palestine before it became Israel, she only made a handful of movies after Ben-Hur before marrying English director Jack Clayton. Ironically, his Room at the Top was knocked off for Best Picture that year by Wyler’s. Still, all things considered, Haya was a pretty good consolation prize. They remained husband and wife until his death in 1995. Today, 2015, Haya Harareet is the sole surviving member of Ben-Hur’s cast. At 84 she is still elegant and beautiful.

Hugh Griffith, the former British stage performer, was most candid when discussing the film that won him his Best Supporting Oscar (he played Sheik Ilderim). ‘I won an Academy Award for Ben-Hur’, he said. ‘I was classically trained, worked all my life; did theatre; worked with the best. Then I appeared in that rather pretentious picture, which was something of a bloated popular epic, yet it won numerous Oscars, and so did Charlton Heston in it. That somewhat deflated the value of my own award, in terms of achievement, don’t you think?’ Well, so much for Chuck’s performance. As for Sheik Ilderim pinning a Star of David on Ben-Hur’s belt prior to the race, well, he was several centuries too early for that. It would be the middle-ages in Eastern Europe before the Star of David would become a symbol of Judaism. Given the enormous number of Jewish people in Hollywood it is quite staggering that someone did not know that. the inimitable Frank Thring as Pontius Pilate in Ben-Hur

Australian actor Frank Thring plays Pontius Pilate. He also played King Herod in King of Kings (1961). He seemed to specialize in portraying nasty, toga-clad villains. Melbourne-born, he was unapologetically and outrageously gay, with a waspish manner not unlike that of Clifton Webb. He married once, but no-one seems to know why. It only lasted a year. In his final years he suffered from several illnesses and too much alcohol. Cancer claimed him at 68. As a point of interest, writer Gore Vidal said he wrote the reunion between Judah and Messala as one between two lovers. Vidal was himself gay and liked to slip gay situations into his books and scripts whenever the opportunity presented itself.

For years it was rumoured that Boyd’s stunt double had been killed while shooting the chariot race, but that was absolutely untrue. Indeed, many people were convinced that three stuntmen were accidentally run over and died from their injuries. In reality, articulated, weighted dummies, complete with moveable arm and leg joints, were used in those sequences. And very effectively too. Even so, like the rest of the picture, the chariot race was also too long.