During the evening of January 20, 1937, Laurence Olivier was starring in Hamlet alongside her father Michael Redgrave when he announced to the audience at curtain call that, ‘tonight a great actress was born’. Over the course of her already long life Vanessa Redgrave has lived up to that accolade, collecting along the way an Oscar, two Emmys, two Golden Globes and two Cannes Best Actor Awards, not to mention several others.

her father Sir Michael Redgrave as

Barnes Wallis in The Dam Busters

Apart from being a wonderfully talented actress, Vanessa has publicly supported many worthwhile causes, although at the time they were anything but popular with the public at large. She was an early opponent of the Vietnam War when it was still thought of by most of her countrymen as an evil necessity for halting the spread of Communism. Vanessa led a protest march on the US Embassy over the issue. She was arrested at a ‘Ban the Bomb’ demonstration; courageously supported Yasser Arafat’s Palestinian Liberation Organization (PLO), protested the Iraq war and called for the closure of the US base at Guantanamo Bay, Cuba.

Over the years she has spoken out in favour of gays and lesbians as well as supporting AIDS research. Her movie career began to suffer, however, when her brother Corin introduced her to the Workers Revolutionary Party, a group aimed at destroying capitalism and abolishing the monarchy. She even ran as a parliamentary candidate for the party on two occasions, but without success. In a 1977 documentary titled The Palestinian, she famously danced holding a Kalashnikov rifle which enraged Zionists everywhere. Her disdain for Zion was no secret and Jewish protesters gathered outside the 1977 Academy Awards when she won an Oscar for Julia. Her reference to ‘Zionist hoodlums’ in her acceptance speech was greeted with gasps and catcalls from the audience, scarcely surprising given the powerful Jewish element in the movie industry.

In 1980, to the astonishment of most people, CBS chose her over Barbra Streisand to play Nazi death-camp survivor Fania Fenelon in Playing for Time. Even Fenelon herself was opposed to the choice, yet Vanessa played the role to great critical acclaim, picking up an Emmy in the process. Four years later when the Boston Symphony Orchestra cancelled her contract because of her politics she sued them for $5 million, stating along the way that her Agatha salary had been reduced for the same reason. 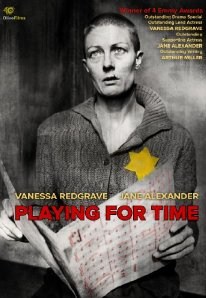 Her private life has been far from conventional either. She met Italian star Franco Nero when they made Camelot together in 1967. They fell in love, she was soon pregnant, and they had a son, but did not marry until 2006! A second child to the same father miscarried in 1971. Her two other children, Joely and Natasha Richardson, came from her marriage to director Tony Richardson (Tom Jones 1963). Natasha married Liam Neeson, but tragically died in 2009 in a skiing accident. More tragedy struck the family when Corin and Lynn, Vanessa’s siblings, died within a month of one another. For about fourteen years she maintained a close relationship with former James Bond actor Timothy Dalton, but that ended in 1984.

The part of her acceptance speech for Julia that upset the Jewish people in her audience was this: ‘…I think that you should be very proud that in the last few weeks you have stood firm and you have refused to be intimidated by the threats of a small bunch of Zionist hoodlums whose behaviour is an insult to the stature of Jews all over the world and to their great and heroic struggle against fascism and oppression. And I pledge to you that I will continue to fight against anti-Semitism and fascism. Thank you.’