John Barrymore’s siblings, Lionel and Ethel, both won Oscars in their careers, but most critics are agreed that John was the best actor of the three. Not everyone agreed, however. Playwright George Bernard Shaw detested his ‘Hamlet’, describing it as one of the worst portrayals in history, accusing the actor of indulging his own ego at the Bard’s expense. Garson Kanin, by comparison, marveled at Barrymore’s ability to memorize huge slices of script (and Shakespeare especially), and his ability to alter his voice to fit whichever character he was quoting, whether in front of the camera or merely in idle conversation. Despite being the owner of an amazing memory, however, Barrymore insisted on blackboards containing all his lines being positioned within his line of vision at all times. When Kanin asked him why he demanded boards, even for a one word response to a question, Barrymore replied. ‘They are just my safety nets, that’s all.’  He also possessed an uncanny ability to cry on cue and squeeze out tears of varying size. He demonstrated this to Kanin on the set of a movie one day. First a big tear, then a small one. Then he started again and did it in reverse – first a small one from one eye, then a big one from the other. ‘It is not acting‘, he said. ‘It is only crying.’ He said he learned how to do it when he was seven years old because he had seen his older siblings, Ethel and Lionel, doing it as children as a ploy to getting whatever they wanted. 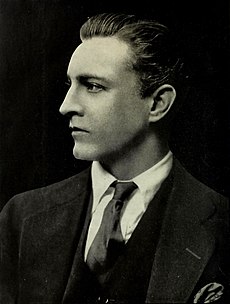 Barrymore at his peak In 1906 the 24 year-old Barrymore was staying at a hotel in San Francisco, awaiting passage to Australia to act in a play called The Dictator, when the great earthquake hit. He hated the thought of traveling Down Under, believing it to be the equivilant of putting on a show in Siberia. The first shock awakened him. The second knocked him into the bathtub. A badly frightened Barrymore promptly handled the situation the best way he knew. He got blind drunk throughout the earthquake and fire that all but destroyed the city. In fact, he told Garson Kanin that he had virtually no recollection of either. Nevertheless, he managed to write a bogus, detailed report that reached national newspapers, even describing how he was recruited by military troops to help clear the city’s roads. None of it was true, as he admitted 20 years later, but his reporting kept him out of the Australian tour. 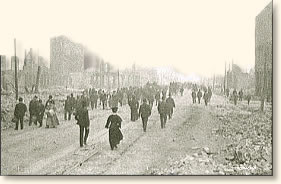 When he was sober enough Barrymore chased women of all ages. Known as ‘the Great Profile’, he had little difficulty catching them. When he invited young Mary Astor’s mother to afternoon tea on his porch in 1920, the lecherous star seduced 14 year-old Mary in his living room.His affair with Evelyn Nesbit, a young showgirl immortalized by Joan Collins in the 1955 movie, The Girl in the Red Velvet Swing, resulted in her becoming pregnant to him. She was also involved with married architect Stanford White at the time, so he arranged for an ‘appendicitis’ operation to fix the problem. Evelyn then declined Barrymore’s proposal of marriage before marrying a rich (but unstable) railroad heir named Harry Thaw. He became obsessed about his wife’s affair with White, culminating in him firing three shots into the man’s head as he sat dining at a crowded restaurant. Thaw’s 1907 trial became known as (the first) ‘Trial of the Century’. ‘Girl on the Red Velvet Swing’ 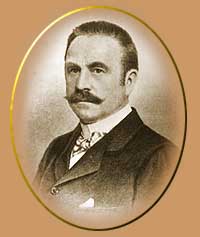 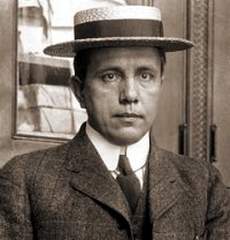 Barrymore remained an icon of both stage and screen until booze and old age caught up with him. The grandfather of actress Drew Barrymore was an alcoholic of legendary stature who once embarked on an ocean cruise in a forlorn attempt to dry out. He wound up drinking anything and everything he could lay his hands on that contained any semblance of alcohol, guzzling mouthwash, perfume, kerosene and Spirit of Camphor until he was violently ill. In his final years upon the stage he often staggered through his performances, completely oblivious to catcalls from disgruntled patrons and groans of dismay from theatre managers. During one memorable production he brought forth gasps from the audience when he halted in mid-sentence and relieved himself in a flowerpot! It would be fair to say that ‘the Great Profile’ managed to drink himself to death by 1942. He was only 60. On his passing a group of his friends, among them Errol Flynn and director Raoul Walsh, held a wake in his honor. Walsh pretended to go home, but he and a couple of friends bribed the caretaker at the funeral home to ‘lend’ them Barrymore’s corpse! They then took it to Flynn’s home, sat it up in a lounge chair, placed a pipe between its dead lips, and awaited Errol’s arrival. He described his reaction in his autobiography: ‘As I opened the door I pressed the button. The lights went on and…I stared into the face of Barrymore…They hadn’t embalmed him yet. I let out a delirious scream…I went back in, still shaking. I retired to my room upstairs, shaken and sober.’

Barrymore himself probably best summed up his approach to acting in the movies. When asked why he refused to learn lines for one of his films, he replied: ‘My memory is full of beauty: Hamlet’s soliloquies, the Queen Mab speech, King Magnus’ monologue from The Applecart, most of the Sonnets. Do you expect me to clutter up all that with this horseshit?’ His knowledge and understanding of acting and actors is probably best shown through an incident that took place during the shooting of a scene in a movie directed by Garson Kanin called The Great Man Votes (1939). Barrymore was giving a lengthy, heartfelt talk to his children played by Peter Holden and Virginia Weidler. Virginia was sitting on his knee playfully twirling his bow tie back and forth as he spoke. Suddenly, Barrymore let out a yell and flung the girl across the floor. Craft-wise beyond her years, Virginia was upstaging him. He knew it and she knew it. Next morning both actors reappeared on the set and shot the scene in one take, no tie-twirling from the 11 year-old Miss Weidler, no histrionics from Barrymore. No animosity or hard feelings either. They were both professionals. An interesting individual was John Barrymore. Come to think of it – so was Miss Weidler.