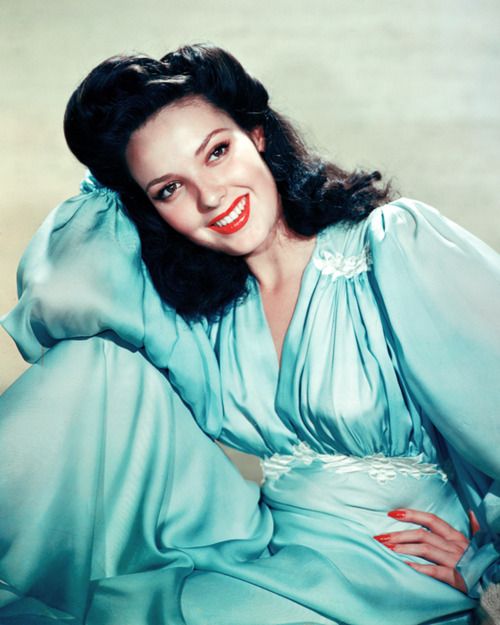 Linda was one of the many local actresses who attended the Hollywood Canteen and did their level best to make a lot of young servicemen briefly happy before they embarked for battle zones on the other side of the world. On one particular evening she danced with two hundred and nine GI’s (she counted them), one of whom sent her a letter. ‘I hope you remember me’, he wrote. ‘I’m the one you danced with last Friday at the Canteen, medium height, red hair, nineteen and army uniform.’ Such letters were not uncommon. Described as ‘the most physically perfect woman in Hollywood’, Linda made several films after war broke out and seemed set for a bright future until she made Rise and Shine (1941) and her career took a hit. Then she lost a really good role because she refused to respond to lecherous Darryl F. Zanuck’s advances, and spent much of the rest of the war working for the Red Cross, selling war bonds and doing stints at the Canteen. Linda was just 41 when she was caught in a domestic fire and suffered burns to 80% of her body. She was a guest at her former secretary’s home in Glenview, Illinois in April 1965 when the premises caught fire. Tragically, her injuries proved fatal. 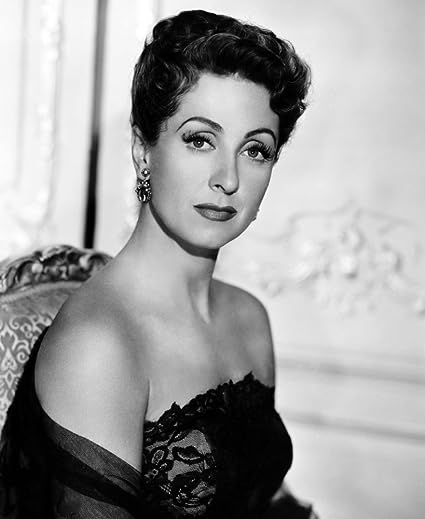 The great French beauty who was known by the initials ‘DD’, long before Brigitte Bardot was dubbed ‘BB’, lived to the age of 100 before passing away in October 2017. During the war she remained in Paris throughout the German occupation. She continued to perform and was severely criticized by her compatriots for doing so. It was later learned that her brother had been threatened with deportation unless she complied with Nazi wishes. After the war she was exonerated. Her 1942 marriage to Dominican Republic diplomat and notorious womanizer, Porfirio Rubirosa, added to her troubles, his anti-Nazi opinions resulting in him being forced to reside in Germany. In order to gain his freedom, Danielle agreed to make a promotional trip to Berlin. The couple were then permitted to make their way to Switzerland where they remained until war’s end. They divorced in 1947. Danielle was seen at her alluring best as ‘the countess’ in 1952’s 5 Fingers opposite James Mason. 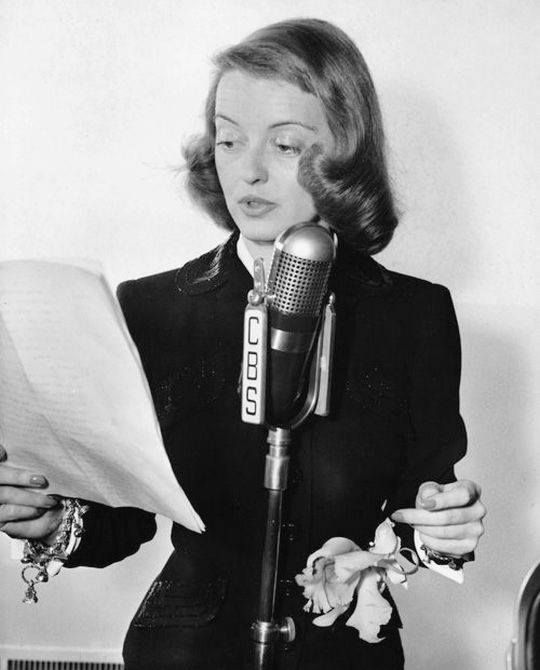 Never a shrinking violet, Bette was heard to comment as she boarded a train for a 1942 bond-selling tour, ‘I think it is outrageous that movie stars have to wheedle and beg people into buying bonds to help their country. But if that’s the way it is, I’m going to squeeze all I can out of everyone.’ And she did. In Tulsa, Oklahoma she auctioned an autograph for $50,000 and a picture of herself in Jezebel for $250,000! In just two days she sold $2 million worth of war bonds. 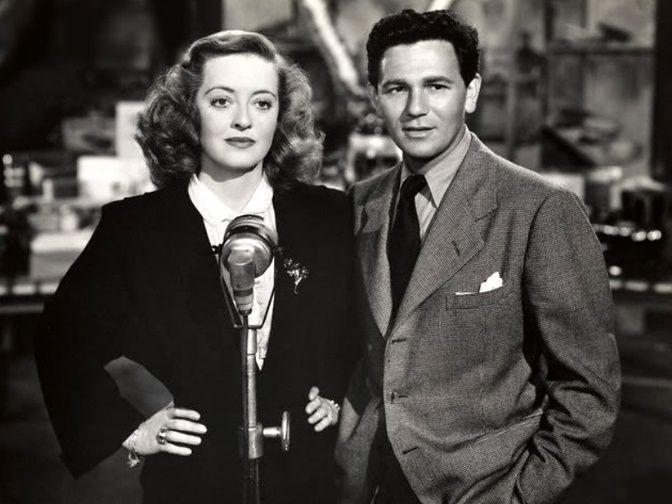 While taking part in the Madison Square Garden bond-selling rally, actor John Garfield helped out at the city’s Stage Door Canteen, a relaxation center for troops that was organized and operated by New York’s actors and actresses. It gave him the idea of setting up something similar in Hollywood, so he talked to Bette about it and the result would be the Hollywood Canteen. He knew he did not have the initiative or clout to get the project off the ground himself, but Bette had plenty of both. She found an abandoned nightclub one block off Sunset Boulevard and renovated it inside three weeks. The Hollywood Canteen had bleachers erected either side of the entrance. People paid $100 each to sit there on opening night and watch 3,000 servicemen enter. Stars and civilians entered by a separate side entrance. Bette serving troops at the Canteen

After the first few weeks it became clear that the Canteen was a raging success and, not altogether surprisingly, that success made certain people very jealous. Bette was called in by James Cagney, the chairman of the Hollywood Victory Committee, and informed that she could no longer contact stars directly for service at the Canteen, but had to first go through the committee. She reminded them that she had already received permission from the committee before she had even begun. Their response was to inform her that the minutes of that meeting had been ’lost’. She promptly addressed the meeting: ‘Mr. Cagney, ladies and gentlemen, I will give you until tomorrow morning to give me back your original permission. If not, I will have no choice but to close the Canteen and I will so advise the 42 guilds and unions who are part of founding the Canteen. I will send a statement to the press if you have not changed your minds by tomorrow morning.’ The committee revised its decision in her favor that same evening. In his autobiography, Cagney does not mention the incident at all.

There was scarcely an actor or actress who did not put in an appearance at the Canteen at some time or another during the war, either to perform, dance with the soldiers, play host or hostess, or work in the kitchen. Nobody was game to turn down Bette when she called. They risked career suicide if they did. Furthermore, she had a knack of choosing her hostesses very carefully, picking only reliable women who were good organizers. There was no charge for servicemen to enter the premises, but there was room for only about 800 of them at any given time. And that included the roped off area for hospital cases. No alcohol was allowed on the premises. Not even Spencer Tracy could avoid kitchen duty

It was common knowledge in Hollywood that Bette liked men, and was especially attracted to some of the more handsome of the servicemen who flocked through the Canteen doors. Vincent Sherman, who directed her in Mr. Skeffington (1944), and had this to say: ‘The sexual suppression you see on the screen, her nervous hysterical energy, was not acting. That’s the way she was in real life’. Then he added, ‘The only way I could finish the picture was by having an affair with her.’ Ah, the tough life of a Hollywood director… 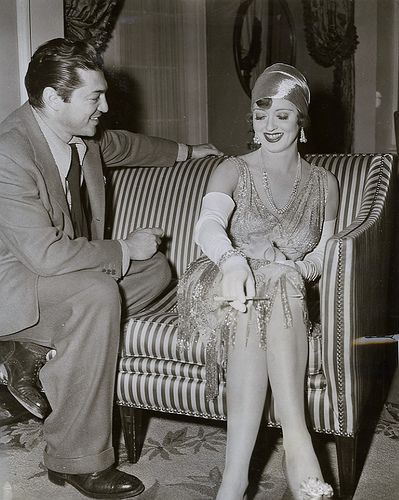 Actor Jack Carson said Bette was known to disappear with the occasional, better looking servicemen she met at the establishment. ‘There were some real lookers at the Canteen’, he recalled, ‘knockouts like Dolores Moran and Julie Bishop and Dorothy Malone, but Bette was the one they clustered around. He once asked a Marine why she attracted such a crowd. The man replied, ‘I hear she screws like a mink.’ Carson thought to himself, ‘Well, ain’t it the truth?’ When the movie Hollywood Canteen was made, insiders used to joke that it would have been a much better picture if it had focused on Bette’s after-hours activities. That aside, she had this to say about those days: ‘There are few accomplishments in my life that I am sincerely proud of. The Hollywood Canteen is one of them.’ She would live until 1989 when metastasized breast cancer would claim her at 81.