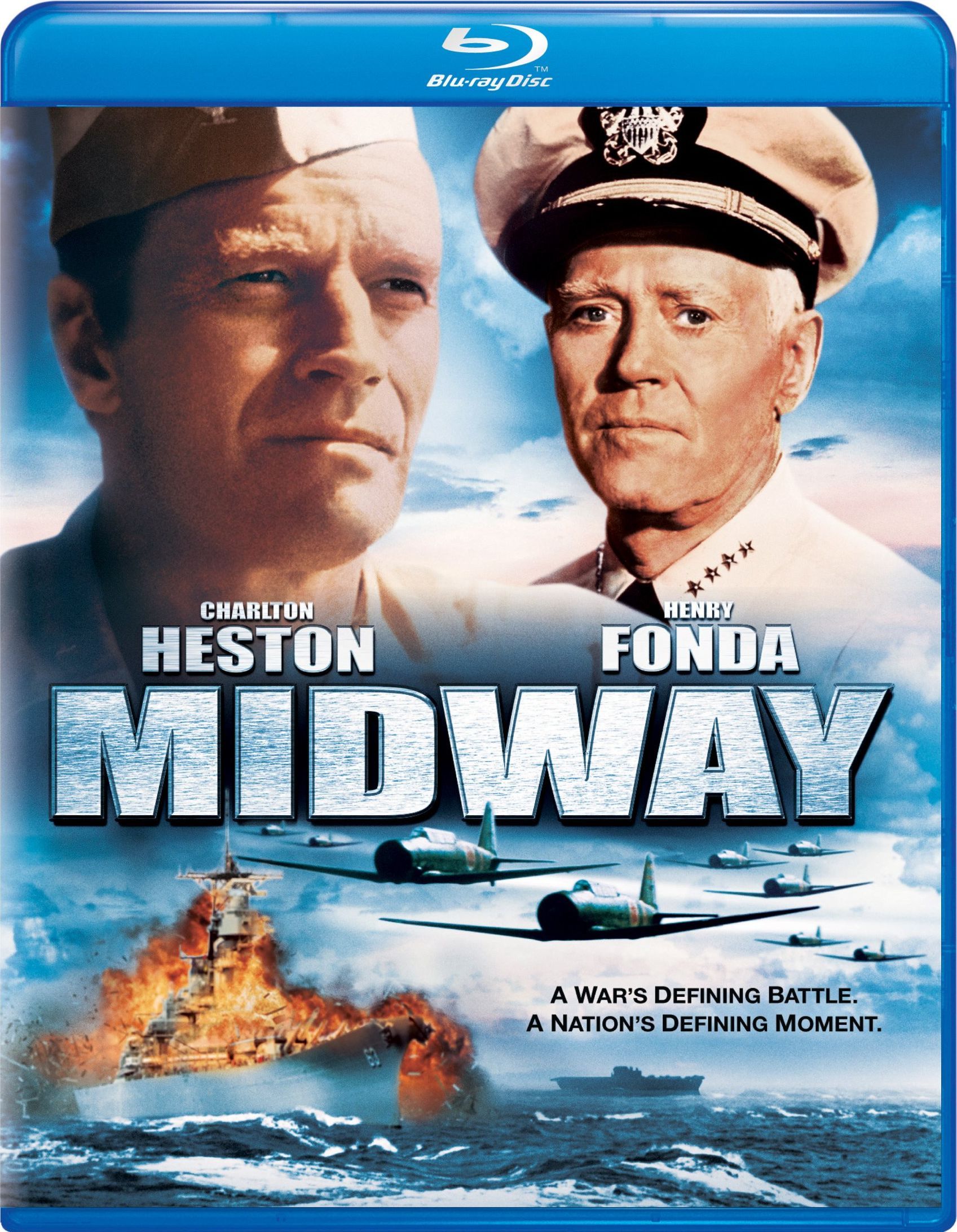 MIDWAY (1976) World War Two – A blow by blow account of the crucial Battle of Midway in June 1942, between carrier-forces of the USA and the Empire of Japan.

Historically, this is an accurate account of the most important naval confrontation of World War Two. It features an all-star cast that includes Henry Fonda, Glenn Ford, Robert Wagner, Robert Mitchum, Charlton Heston and Cliff Robertson. Unfortunately, it also has a lame love crisis that does nothing for the film, whatsoever. Heston’s son, played rather pathetically by Edward Albert, is in love with a Japanese girl from Hawaii and her parents are about to be interned on suspicion of being enemy sympathisers. If you treat Midway as a re-enactment of a terrible day in history it is a fine film. If you are expecting a memorable romantic story you will be disappointed.

ONE THAT GOT AWAY, THE (1967) World War Two – The true story of a German fighter pilot who was shot down over Britain and sent to a POW camp in Canada.

Franz Von Werra is superbly played by German star Hardy Kruger in, arguably, his best screen performance of his career. For sheer determination and perseverance, Von Werra was unique. Shipped off to Canada, he never ceased plotting to escape captivity and get himself back in the war. Kruger only won the role because Kenneth More and Dirk Bogarde had both turned it down. Neither felt comfortable playing an arrogant Nazi fighter pilot. Perhaps, the war was still fresh in their memories. As it happened, Kruger was himself captured towards the end of the war, in Normandy by the Americans, when he was fighting with the SS. Furthermore, he managed to escape from his captors. 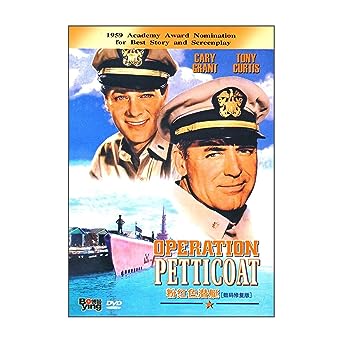 OPERATION PETTICOAT (1959) World War Two – A romantic comedy about the crew of an American submarine forced to set sail in the Pacific while still under repairs.

If war was as much fun as this the conflict may well have continued indefinitely. Cary Grant is the Commander and Tony Curtis the new executive officer who happens to be a conman, manipulator and womaniser. A tongue-in-cheek version of James Garner’s character in The Great Escape (1963), he is a master ‘scrounger’ who has a knack for getting results. During his cruising around the Pacific Grant is forced to pick up a group of navy nurses. Needless to say, most of them are drop-dead gorgeous and love blooms. Curtis is terrific in this kind of role – very glib and likeable. Evidently, co-starring with Grant was his dream come true, but he quickly discovered his idol had feet of clay. ‘He was a fucking bore’, said Curtis of his former idol, ‘who sucked the air out of any room he was in!’ Tony rarely minced words, in person or in his writing. 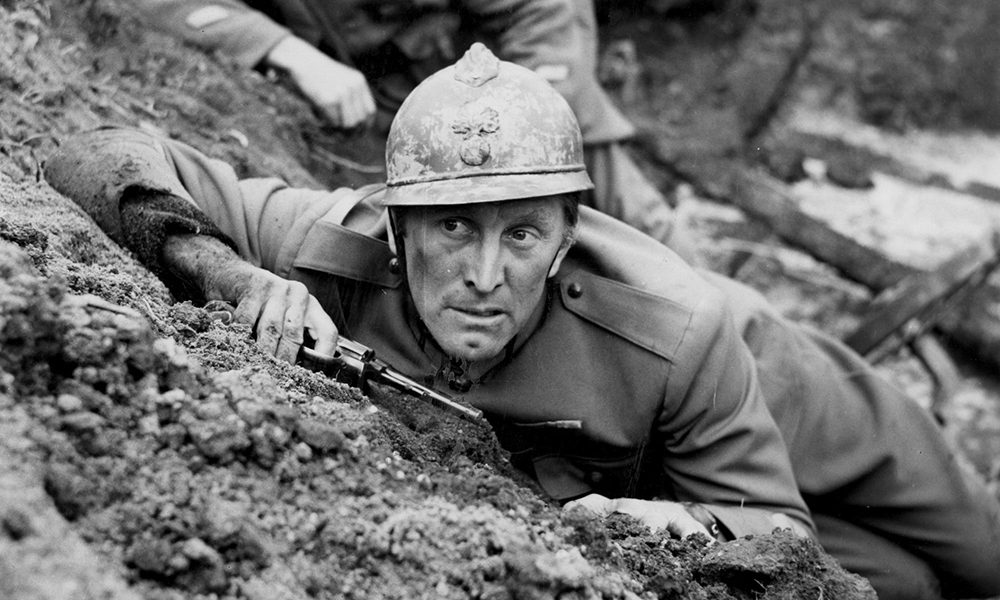 PATHS OF GLORY (1957) World War One – French generals randomly sentence three soldiers, chosen by their commanding officers, to death for ‘cowardice in the face of the enemy’.

Christiane Harlan as the singer

Arguably, the most poignant anti-war film ever made, Paths of Glory is an indictment of the officer system in the French Army during the First World War, and the pitiless lengths some generals were willing to go to in order to save their careers and reputations. Although this is a work of fiction, similar real life decisions and outcomes have been documented throughout the conflict. Kirk Douglas gives, in my opinion, the best performance of his career as the officer who attempts to prevent the summary executions scheduled by his superiors. On the set, director Stanley Kubrick met and fell in love with Christiane Harlan, (an actress who sings a song near the end of the picture). He promptly divorced his wife, married Miss Harlan, and they remained together until his death in 1999.

George C. Scott as Patton in the movie

George C. Scott won the Academy Award for his portrayal of the rogue American general of WW2 who had a penchant for saying and doing the wrong thing at the wrong time. The real Patton, unlike Scott, had a high-pitched voice and used profanity in his speeches and addresses to his troops to distract from it. He was also convinced he had lived past lives, one of them as an officer under Napoleon Bonaparte. The movie is well worth watching, although I found it difficult to care much about a man who openly confessed to enjoying warfare. ‘I love it’, he says. ‘God help me I do love it so. I love it more than my life.’ These words may have been created by the screenwriter, of course. One would hope so, but most historians would argue that Patton was a man singularly obsessed with being a soldier. This was the performance that saw Scott turn down the Oscar, declaring that the Academy Awards were nothing more than a ‘meat parade’. If he truly believed that, one wonders why he did not refuse the nomination in the first place, rather than wait until he had won. 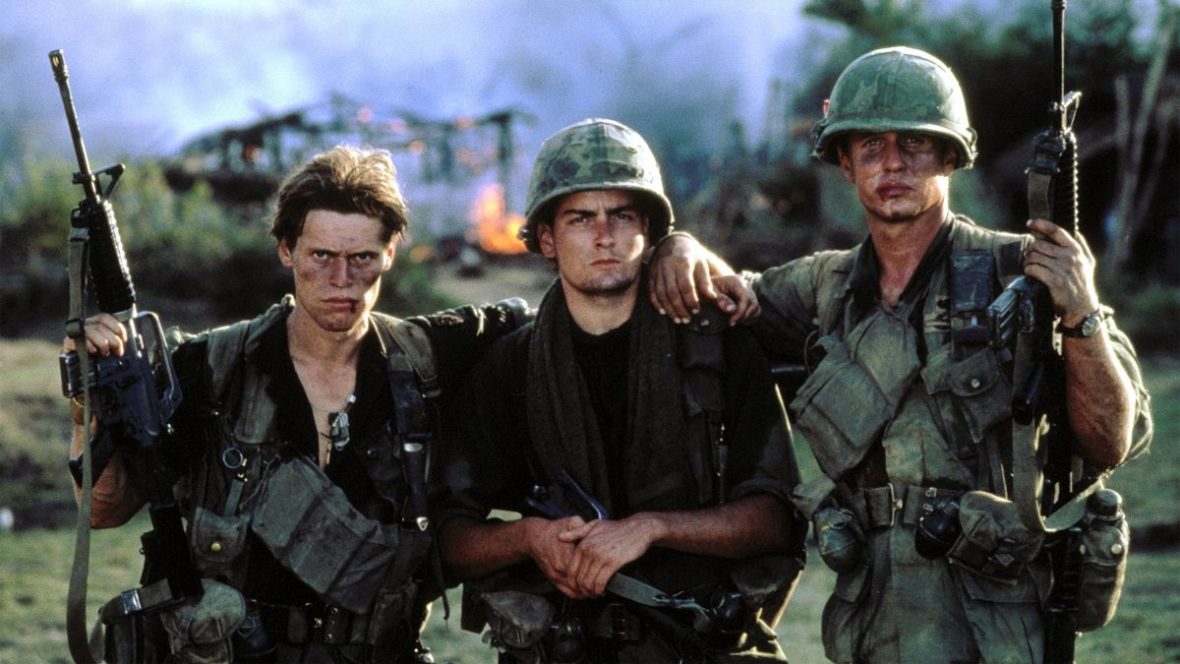 Stone wrote the first draft of Platoon in 1971 and sent it to Doors lead singer Jim Morrison in the hope he would play the role that ultimately went to Charlie Sheen. The draft was found on Morrison’s body in Paris. Stone said he wrote it to counter the phony depiction of the war he had seen in John Wayne’s The Green Berets (1968). He deliberately cast Tom Berenger and Willem Dafoe against type. And the ploy worked brilliantly. Berenger usually played a heroic figure and Dafoe was mostly cast as a bad guy. The result saw both actors give performances that earned well-deserved Oscar nominations. Platoon was probably the first war film to deliberately present a combat soldier’s point of view and to depict war as what it is – a grim, dirty, terrifying experience. 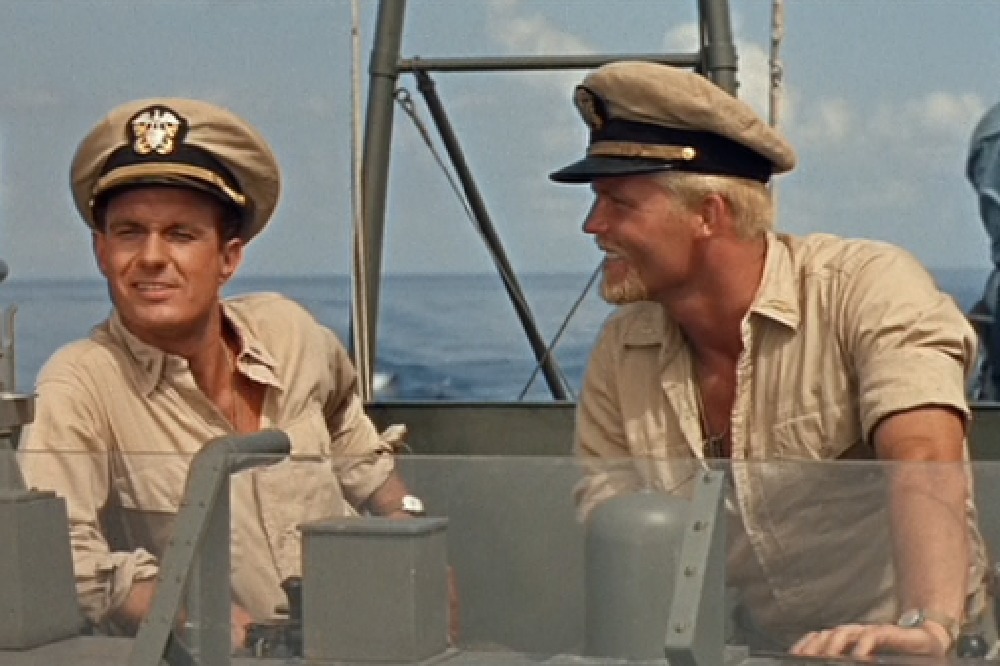 Commander Kennedy aboard his PT boat 1943

Jackie Kennedy wanted Warren Beatty to portray her husband in this movie. Others suggested that two of the stars from TV’s 77 Sunset Strip series, Roger Smith and Ed ‘Kookie’ Byrnes, might be suitable, but JFK personally selected Cliff Robertson for the role. It was a surprising choice. The picture was about Kennedy when he was in his twenties, yet Robertson was fast approaching forty! Indeed, JFK was only 46 when he died in 1963. When Kennedy took command of the 109, it had already been engaged in continued combat for the past five months. It was certainly not the derelict hulk he was given in the movie. Like all PT boats, the 109 was painted dark green (not grey), a necessity for camouflage purposes when it was secreted along shoreline bushes during daylight hours. Kennedy did participate in the rescue of marines from Choiseul, as shown in the movie, but it was as skipper of PT 59, his next command after he lost the 109 in April 1943.