Mickey Rooney was at the top of the Hollywood tree in the thirties and lived his life in the fast lane. MGM’s publicity machine had him collecting stamps and coins like any other young American boy. It was even spread about that his favourite author was Eugene O’Neill. Randy little Mickey did not collect stamps or coins, nor did he read books, any books, much less O’Neill’s. He chased girls – period. And he caught them. In fact, as often as not, they caught him first. Norma Shearer, the widow of his former boss Irving Thalberg, used him for sex when he was still a teenager and she in her mid-thirties. His adoring public, of course, had no inkling of this. Mickey at his peak in WW2    Norma Shearer in WW2

Mickey’s mother certainly knew, however, and took steps to curb her son’s obsession with hookers and famous, older women. She even went to LB Mayer and his trouble-shooter Howard Strickling and spilled the beans on her randy little boy, naming some of the women he was servicing. Norma’s name headed the list. While all this was going on Mickey claims he was introducing 17 year-old Lana Turner to the wonders of sex, although she always denied it. In no time at all she would make him look like a novice. It is now generally accepted that the studio stepped in and paid for her to abort Rooney’s child. His marriage to the stunning Ava Gardner did not last long, not that this surprised many people, for it was common knowledge that she probably only married him because he was number one at the box office and her career could do with the publicity boost. In fairness to Ava, she was pretty naive back then and may have thought it was true love. Mickey soon rid her of such foolish notions. In his autobiography he shrugs off union with Hollywood’s most beautiful love goddess, saying that he preferred playing golf to spending time with her at home. The truth, according to Ava, was nothing of the kind. She told friends that he was ‘sexually inadequate’, an insult that the self-professed ‘ladies’ man’ resented bitterly.

Her criticisms sound like ‘sour grapes’, however, more than likely a knee-jerk reaction to his many infidelities. Actor Robert Vaughn wrote in his autobiography that it was common knowledge that Rooney and comedian Milton Berle were deemed to be two of the best endowed men in Hollywood. Then again, the mantle of the best equipped actor down the years could very well go to any one of a number of stars. Depending on whose biography we read, the title more than likely would rest with any one of the following: Berle, Rooney, George Raft, Forrest Tucker, John Hodiak, Gary Cooper, Frank Sinatra, David Niven, Roddy McDowall, or any one of a dozen others. 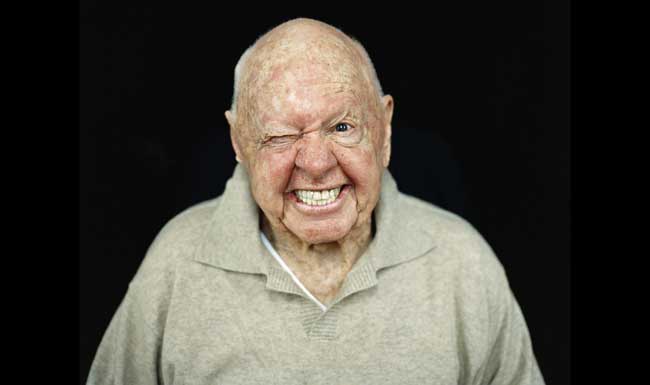 In 2007 Mickey officially became the holder of the longest-running movie career in history – 81 years before the cameras (1926-2007). Until then former ‘silent’ star Lillian Gish held that honour. In fact, he was the only movie star from the silent era to be still acting into the 21st century. He made his debut before sound in Not to be Trusted at the age of four, and was working on two films at the time of his death in 2014. His eighth marriage lasted more years than the other seven combined.

It was believed that Rooney’s net worth was around $12 million at the peak of his career, but he only had about $500 to his name at the time of bankruptcy in the 1960s. He passed away in early 2014 after a long life, and was able to get out of bankruptcy in the 52 years that followed his initial filing. Just like Robin Williams, Rooney’s final film was Night at the Museum: Secret of the Tomb.

John F Kennedy’s sister, Patricia, married actor Peter Lawford in April 1954. A decade later they divorced and she was soon involved in a romance with Robert Vaughn. Another of Vaughn’s lovers was actress Helen Westcott who starred opposite Gregory Peck in The Gunfighter (1950). In his autobiography, A Fortunate Life, he described her as ‘a sexual adventuress and guide’ of exceptional ability. ‘You will remember this night for the rest of your life’, she promised him. And she was right. Incidentally, fans of Disney’s Annette Funicello may be surprised to learn that her brother Joe was Vaughn’s agent for much of his career.

In his early years in Hollywood, beginning in 1956, Vaughn was romantically linked to Natalie Wood for over a year. They liked to frequent the Beverly Hills Luau Restaurant which was owned by Steve Crane, the husband of Lana Turner. He was a close associate of mobster Johnny Rosselli, the man who later claimed he had personally fired the head shot (from a sewer in Dealy Plaza) that killed JFK in 1963. Vaughn and 17 year-old Natalie would dine at the restaurant before trysting in nearby hotel rooms. A decade later he would hook up with the ex-wife of Peter Lawford, JFK’s sister Pat Kennedy. He had first met her brother Bobby at the Ambassador Hotel in Los Angeles in 1960. Eight years later that same hotel would be the scene of RFK’s assassination. For six years, between 1967 and 1973, the FBI conducted an investigation into Vaughn’s activities, examining the possibility of him being a Communist subversive, all because he had publicly stated his opposition to President Lyndon Johnson’s escalating prosecution of the Vietnam War. Vaughn was indeed the first Hollywood actor to courageously voice his objections to the war. At long last, in 1973, the FBI deemed him not to be a security risk and his bulky file was closed. Vaughn and Steve McQueen struck up a friendship on the set of The Magnificent Seven back in 1960, and it continued for the rest of the latter’s life. It was McQueen who introduced Vaughn to hair stylist Jay Sebring who also befriended him. In the summer of ’69, Sebring invited Vaughn to a dinner party (as he often did), and Vaughn politely declined (as he always had). It was at a home in Cielo Drive. That evening the Manson gang butchered actress Sharon Tate and all her dinner guests at her home on Cielo Drive, Jay Sebring being among the victims. McQueen was on his way to the house when he met a pretty blonde and decided to head to a hotel room with her instead. The killings un-nerved him, especially when police discovered his name on Manson’s hit-list. From that day forth, wherever possible, he carried a gun.

In 1983 Vaughn travelled to Johannesburg, South Africa to make a movie with Oliver reed, an actor he had never met before. The producer of the picture arranged a dinner for four in a nice family restaurant. By the time Reed and his date arrived it was evident that they had consumed quite a lot of liquor along the way, but that did not prevent (or even slow down) their consumption at the dinner. After numerous toasts Oliver suddenly asked Vaughn, ‘Would you like to see my living, beautiful bird?’ Bobby, very politely, said he would love to see it, although he had no idea of what to expect. To the shock of all the families dining around the group, Reed immediately climbed onto the table, dropped his trousers, and displayed his penis, complete with an eagle tattooed on its head! As Vaughn learned later, this was something Ollie did whenever he got plastered – which was often. As a point of interest, the bar in Valletta, Malta in which he suffered his fatal heart attack during the Gladiator shoot in May 1999, is now named ‘Ollie’s Last Pub’.

In August 2003 Charles Bronson passed away leaving Vaughn as the sole surviving member of The Magnificent Seven. When Eli Wallach (Calvera in the film) died in June 2014, he was left as the only living star of the picture. Rosenda Monteros, who played Petra, the beautiful village girl found hiding near the river by Chico, had only a minor role in the film and is still alive today. She is 81. Robert Vaughn succumbed to acute leukaemia in November 2016 at the age of 83,