When 79 individuals were subpoenaed in September 1947 by the House Un-American Activities Committee (HUAC), and charged with subversive actions and/or injecting Communist propaganda into their movies, the repercussions career-wise for many of them were long and destructive. The charges were never substantiated, but their accusers were not concerned with the legality of the accusations. When several of those charged refused to answer questions about their membership in the Screen Writers Guild and the Communist Party, citing the First Amendment and their right to privacy, freedom of speech and freedom of thought, they were further charged with contempt of Congress for refusing to answer committee questions. Ten of these individuals, later known as the Hollywood Ten, went to prison. It should be noted that being a member of the Communist Party did not constitute a crime in the first place. The HUAC also demanded that anyone brought before it must name names of others they knew or suspected to be Communist sympathizers. It was very much like the witch trials of long ago. In Salem back in 1692, for example, accused woman could initiate their own release by naming others they thought might be witches. 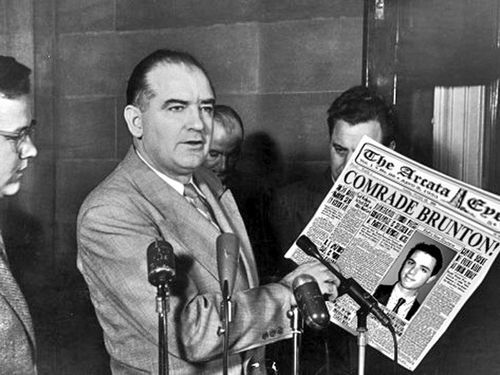 The Hollywood Ten courageously defended their rights before the committee, fully aware they were in grave danger of being found guilty of contempt, but inwardly believing those convictions would be overturned by the Supreme Court. They were wrong. Each was fined $1,000 (about $11,000 in 2016 dollars) and given a prison sentence ranging from six months to a year. Throughout the hearings their statements were cut short by their interrogators after just a few words, while witnesses who testified in co-operation with the HUAC were allowed to speak unhindered and at length. Ironically, the First Amendment was used in the hearings to protect the powers of the government accusers, but not the rights of the accused. Later in the proceedings defendants tried a different tack, invoking the Fifth Amendment (against self-incrimination) instead. At least this ploy kept them out of gaol. 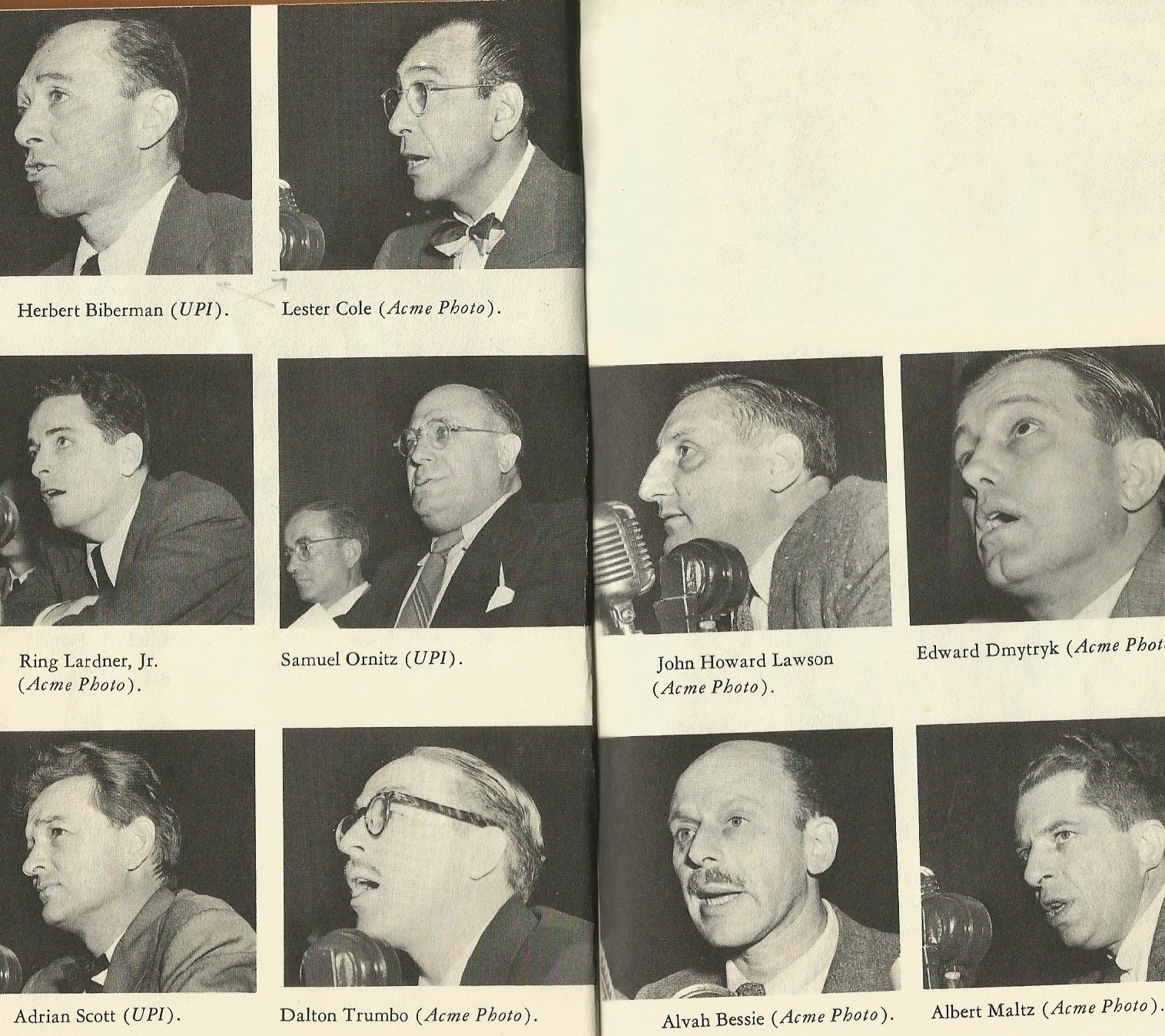 One of the Ten eventually recanted and co-operated with the HUAC. Edward Dmytryk had testified to being a Communist anyway (as had writer Dalton Trumbo), and he later defended his decision to do an about face and co-operate with his accusers, openly regretting his time with the Ten and describing himself as ‘the odd man out’ in the group. The Hollywood Ten were:

Albert Maltz – screenwriter (This Gun for Hire, The Robe).

John Howard Lawson – writer and head of the Hollywood division of the Communist Party USA. 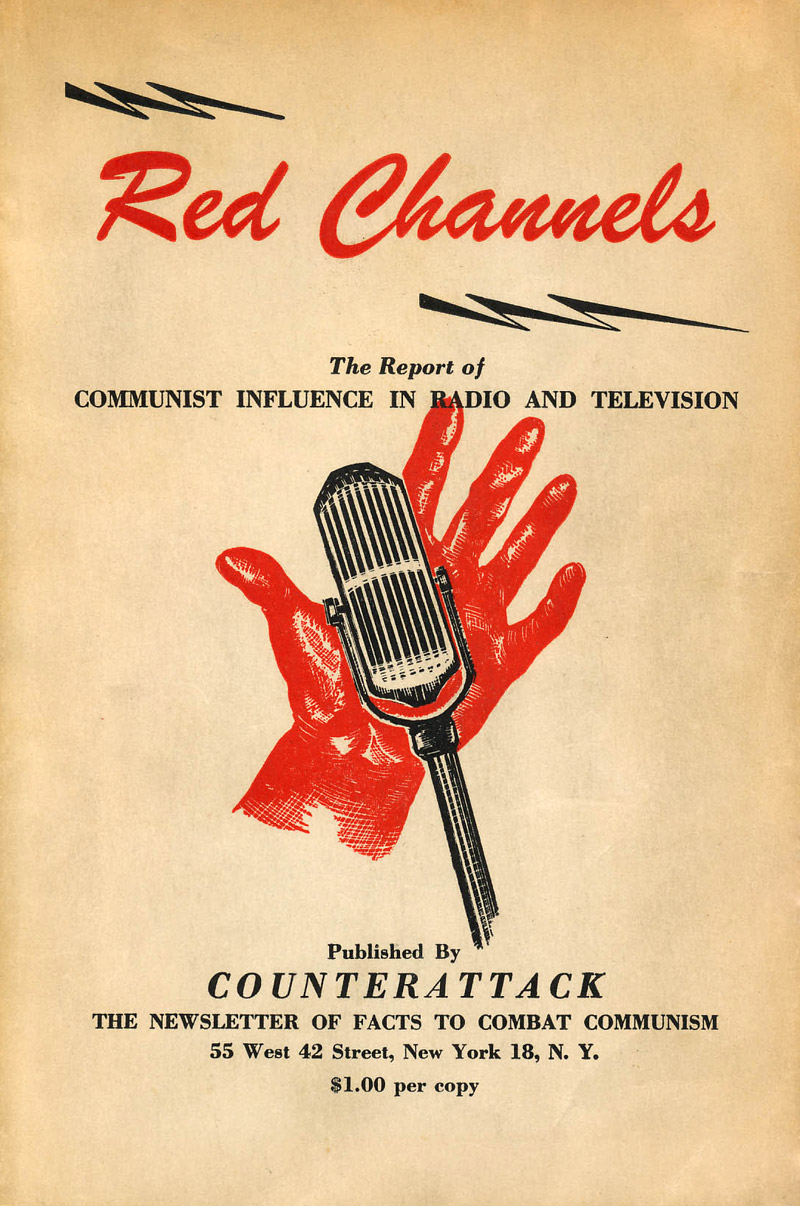 Apart from the livelihoods of the Ten, there were a lot of other careers seriously affected, even curtailed, by the HUAC hearings and outcomes. The first systematic Hollywood blacklist was instituted in November 1947. In June 1950, a pamphlet called Red Channels was published listing entertainment industry ‘Red Fascists and sympathizers’, 151 people in the industry who would soon be barred from the entertainment industry just for being on that list. There was never an official blacklist, but it existed nevertheless, and it lasted until about 1960. Here are a few of the 151 on the Red Channels list who found it nigh on impossible to get employment in the industry during that period. The odd man out is Lee J Cobb. He did an about face when named and betrayed his colleagues.

Lee J Cobb – actor – nominated for The Brothers Karamazov and On the Waterfront. He named names to the Committee for two reasons. His wife had suffered a nervous breakdown and he was concerned for her health; and he wanted to preserve his career.

Will Geer – actor – played grandpa in The Waltons.

The one and only Judy Holliday 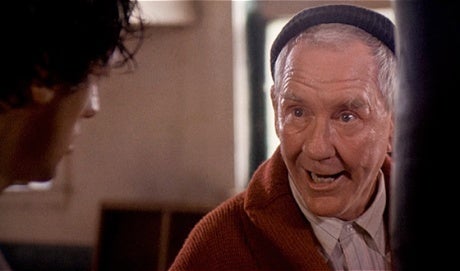 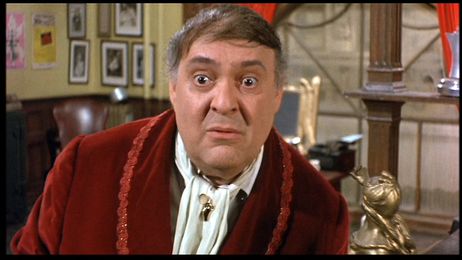 Zero Mostel in The Producers

Edward G Robinson – actor – legendary player who was never once nominated for anything.

Others blacklisted after 1950 included: 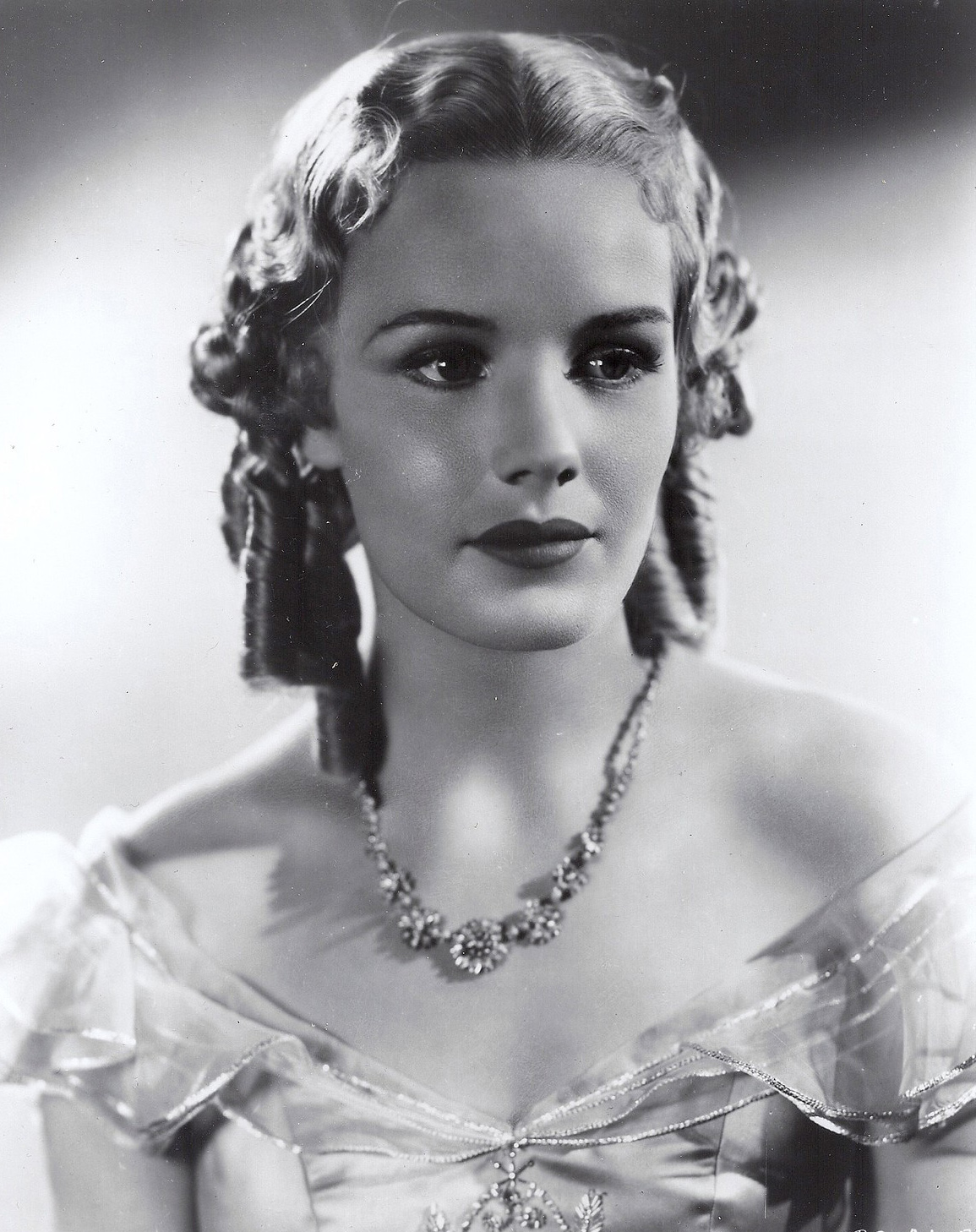 John Ireland – actor – Nominated for All the King’s Men.

Larry Parks – actor – Nominated for playing the lead in The Jolson Story. Like Lee J Cobb, he later named friends and colleagues to the Committee, but it did not save his career.

Larry Parks in The Jolson Story

Martha Scott – actress – Nominated for Our Town. Played Miriam in 1959 version of Ben-Hur.

The ‘friendlies’ who happily identified instances of alleged Communist activity in Hollywood whilst identifying suspected Communists and Communist sympathizers in the industry included:

Jack Warner, studio head at Warner Brothers. He identified as a Communist a known non-Communist Howard Koch, more or less because Koch had participated in a union strike against the studio in 1945.

Louis B Mayer, head of MGM.

Robert Taylor, actor, identified fellow actor Howard da Silva as a ‘probable’ Communist because, ‘He always seems to have something to say at the wrong time.’

The 1951-2 hearings produced more of the same, Senator Joseph McCarthy labeling many witnesses as ‘Fifth Amendment Communists’. After the Supreme Court ruled that invoking the Fifth was not permissible, witnesses had to choose between defending their past actions and implicating other people – inform on friends and colleagues or face a prison sentence. The HUAC called 90 witnesses in 1951, among them:

Martin Berkeley, screenwriter who named 162 people as past members of the Communist Party!

Robert Rossen, director, did likewise but later caved in and gave the Committee names. 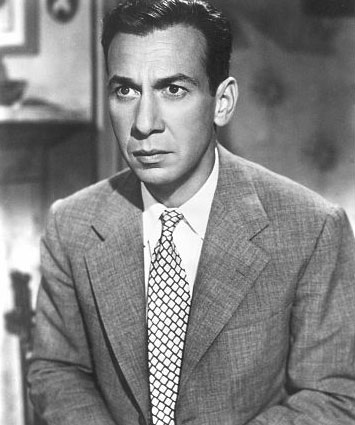 Arthur Miller, writer, refused but did not invoke a constitutional right, so he was found to be in contempt of Congress, fined $500 and given a 30-day suspended jail sentence.

John Garfield, actor, attempted to co-operate, but since he was never a member of the Communist Party anyway, he was unable to furnish the Committee with any names. It is generally believed that his dilemma over the hearings brought on the heart attack (he already had a weak heart) that killed him at that time. Between 1953 and 1955 more hearings helped build the unofficial blacklist that ruined or severely damaged hundreds of careers. The final movie industry hearing took place in 1958.

Lucille Ball was a witness with a difference. She testified that she had once become a member of the CP in 1936, but only to please her grandfather. She fully repudiated it.

Singer Paul Robeson belligerently took the Fifth. Arthur Miller appeared again, answered questions, but did not inform on anyone. 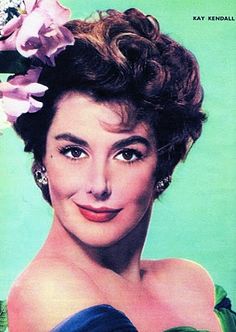