I wonder how many people outside American football fans know what the ‘O.J.’ stands for in Simpson’s name? He was born ‘Orenthal James’ in San Francisco in July 1947. His father was a well-known drag queen in San Francisco who separated from the boy’s mother in 1952. Mr. Simpson would later announce he was gay before dying from AIDS in 1986. OJ suffered from rickets and wore braces on his legs until he was five. He joined a street gang as a boy, but his prowess at football as a teenager earned him an athletic scholarship to the University of Southern California. As a footballer he was known as ‘the Juice’, a running back of exceptional skill and power, the first player in the NFL to ‘rush’ more than 2,000 yards in a season. He played eleven memorable seasons between the years 1969 and 1979, at first with the Buffalo Bills and later with the San Francisco 49ers. After retiring he went into movies and was quite successful there as well, yet in the end it all came to nothing. So what happened? In 1994 he was charged with the stabbing murder of his ex-wife Nicole Brown Simpson and her boyfriend Ronald Goldman. At 12.10 am on June 13, 1994 their bodies were found outside Nicole’s condominium in Brentwood, Los Angeles. They had been dead several hours. In 1995, amid universal dismay, Simpson was acquitted by a jury of both killings and allowed to go free. As if to publicly slam the acquittal, a civil court in 1997 awarded the families of the victims a $33.5 million judgment against him for their wrongful deaths. Simpson’s saga continued in 2007 when he was arrested in Las Vegas and ultimately convicted of armed robbery and kidnapping. In 2008 he was incarcerated for 33 years (a minimum of nine years without parole) and sent to the Lovelock Correctional Centre in Nevada. A lot has been written about OJ Simpson since then. Some of it might even be true. He was acquitted of the murders partly because the LAPD messed up the evidence, and partly because of the conduct of LAPD officers throughout the 90’s, and especially that of three years earlier with the Rodney King beating. African-American Mr. King was taped being pulled over for a traffic ticket and then being viciously assaulted by several LAPD police officers. That was bad enough, but then the LAPD Rampart Scandal of the late 1990s resulted in 70 officers being implicated in misconduct involving evidence planting, frame-ups, perjury, covering up of evidence and narcotics dealing. Over 100 prior convictions were consequently overturned. 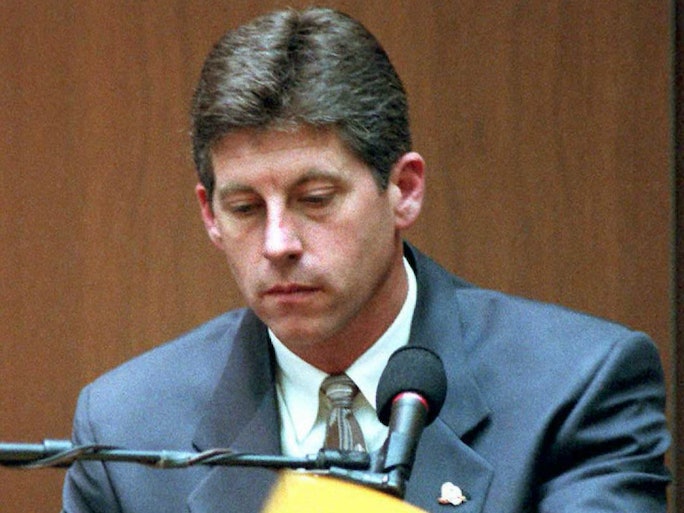 Detective Mark Fuhrman on the stand

The LAPD had a deplorable record regarding minority groups and Detective Mark Fuhrman, the man who allegedly discovered a bloody glove behind OJ’s guest-house, tarnished that reputation even further. It emerged at the trial that he had been seen snooping around Simpson’s house without a warrant. The black glove was the lynchpin of the case against Simpson, yet it did not even fit his hand! Proof of his racist nature, his regular use of the word ‘nigger’ and his open hostility towards African-Americans were revealed on the stand, all of which cast doubt on his entire testimony and on the evidence he had supposedly accumulated. When asked under oath if he had ever used the word ‘nigger’ to describe African-Americans, he said ‘no’ four times. A tape was then played in which he clearly used the word forty times. To every question asked of him by the defense attorney after that he declined to answer, standing on the 5th Amendment every time. He was convicted of perjury and it would be reasonable to say that the prosecution’s case went down the drain with him. Many people, including the jury, felt he could have planted the gloveto strengthen the case against Simpson. OJ tries on the gloves – a pivotal moment

But Fuhrman wasn’t the only problem. The DNA evidence which looked so strong at the outset of the trial was eventually shown to be tainted – all of it – simply because the chemical EDTA, (used in the lab to preserve blood samples and prevent them from clotting), appeared on every item. All because of shoddy police work. Doubt, serious doubt, on its authenticity was cast. Similarly, ‘chain of custody’ of most of the blood samples had been broken more than once. The prosecution could not account for the whereabouts of all the samples between the day of the murders and the commencement of the trial. This is a basic requirement and the LAPD blew it. Consequently, the possibility that a shady police officer may have switched or tampered with them arose. The FBI forensic expert was accused by a colleague of fabricating evidence to make Simpson appear guilty! A tape was played at the trial in which the lead detective admitted planting evidence. The police were caught planting blood-soaked socks. They showed a photograph of Simpson’s left hand with a cut to one of its fingers; but then argued he was wearing gloves during the killings. There was no cut on the glove! Goldman’s hands were swollen and bruised, indicative of him being able to land some heavy blows on his assailant before he died. Simpson stripped naked and was examined for evidence of having been punched. No such evidence was found anywhere on his body!

The prosecution struggled to produce a motive for the killings. Why would a man with a 25 year-old beautiful girlfriend (Paula Barbieri) slaughter his 35 year-old, drug-addicted ex-wife and her boyfriend on the doorstep of her home where his children might have seen him do it? It made no sense. However, it is believed that Paula left a 30 minute message for Simpson on the morning of the murders, telling him she was leaving him for singer Michael Bolton. OJ has maintained he never got that message. But what if he had? How would it have affected his mind-set? In a later interview Miss Barbieri muddied the waters even more by stating that she broke up with him after his acquittal.

And what about the second set of unidentified footprints at the murder scene? They were not a match in size for Simpson’s. It still remains a mystery regarding just who made them. There was a large amount of OJ’s blood found all over the murder scene, yet no injury was discovered on his body that could possibly account for such a quantity of blood. So how did it get there? Could it have been planted? No murder weapon was ever found either. Neither were any blood-soaked clothes belonging to the accused.

Simpson claimed he was at home practicing his golf swing at the time the murders were committed. Despite the police altering the time of death a number of times in an attempt to connect his whereabouts to it, they were never able to establish a time-line to prove it. The prosecutor claimed that OJ had a history of beating Nicole. She was said to have written about his violence in her diary, even recording fears for her life. Maybe he did beat her, but he was never charged, arrested or convicted of doing so, and that was in a state where police policy was to search thoroughly for even the slightest evidence of this whenever they were called to domestic disputes.

Nicole’s drug habit, past and present, suggested to some that she and Goldman may have been professionally ‘hit’ by drug dealers. The killings, they say, were not the work of an amateur or a love-crazed jealous husband. Goldman, for instance, a 7th degree black belt, had an artery in his leg and a nerve severed prior to death. Nicole had been given what appeared to be a classical Colombian necktie. Furthermore, Goldman’s best friend Brett Cantor had suffered a similar fate just a year earlier. Nicole was known to have frequented the nightclub where he worked. Michael Nigg, another friend, had his throat slashed and had been shot in the head four years ago. A co-worker’s car had been blown up and two others had gone missing. All of these people were believed to have been involved in the drug trade one way or another. Another fascinating possibility exists, albeit an unproven one. Simpson’s son Jason had a history of knife crime. In fact, he was taught knife combat at the army and naval academies. A photograph exists showing him wearing a dark-colored knit cap, just like the one found at the murder scene. The cap at the scene bore African-American hairs as well as dog hairs. Jason had a dog. It is visible in that same photograph. Investigators found skin and blood under Nicole’s fingernails that did not match OJ’s. Is it possible that OJ saw what happened (or arrived soon afterwards), and knew (or suspected) that his son was involved? Is it possible he took off in his Bronco to give the appearance of guilt, to draw attention to himself? Was Jason questioned and eliminated as a possible suspect, or was he never under suspicion? There also exists a photograph taken at the instant OJ was pronounced innocent of murder. Jason’s response to the verdict is in direct contrast to that of other family members alongside him. Why? Jason Simpson in court as the verdict is read

In what could be described as one of the great casting ironies in the history of the American Cinema, OJ Simpson missed out on portraying The Terminator in the 1984 blockbuster movie of that name because the producers considered him to be ‘too nice to be taken seriously as a cold-blooded killer.’ Three years after his acquittal he appeared on The Ruby Wax Show where he surprised his host at the end of the show by pretending to stab her with a banana while mimicking the music from the 1960 thriller Psycho! She believed it was his sick idea of a joke! Miss Wax has since publicly called him a murderer on television. If he didn’t commit the murders he was fast becoming his own worst enemy with thoughtless actions like that.

The world in general has pretty much condemned the jury that acquitted Simpson as being either corrupt, cowardly or incredibly stupid, (even all three), but what else could they have done, given the prosecution’s abysmal handling of the case? Many critics consider their verdict to be an indictment of the jury system in the USA, but I disagree. It was more an indictment of sloppy, biased, possibly corrupt police procedures, compounded by legal ineptitude. If anything, the verdict they handed down endorsed the jury system, for no-one should be convicted on evidence as shoddily presented as that in the Simpson case. Did he do it? I honestly don’t know. I thought I did until I delved deeper into his farcical trial. Like most people, I suppose if pushed I would say, ‘yes, he did it’, but there remains that nagging doubt. And doesn’t the law insist on proof of guilt ‘beyond a reasonable doubt’? The bottom line is that investigators have an obligation to do their jobs correctly if they wish to get a conviction. In the case of OJ Simpson that simply did not happen.