I thought it might be fun to examine the Ratings Lists for American television through 1950 to 1980. Most of the Australian shows at the time were imported from America (probably still are), so tastes here were very similar to those of the United States. Even so, there were quite a few surprises. I will start with the westerns simply because there were so many of them, especially in the fifties and sixties. I will list those shows that made each season’s Top 30 between the dates mentioned above, and make the occasional comment. (1949-57). Starred Clayton Moore as the Lone Ranger and Jay Silverheels as Tonto. Moore sat out 52 episodes because of a pay dispute, replaced by John Hart. Tonto’s name means ‘stupid’ in Spanish. His horse was named Scout. (1954-9). Starred Rin Tin Tin, Lee Aaker as Rusty & James Brown as Lt. Rip Masters. The fort was named Fort Apache, the set being the same one John Ford used for his 1948 film of the same name. (1955-75). Starred James Arness as Matt Dillon. A German machine-gun at Anzio separated him from part of his foot, the wound troubling him all his life. Because of the anti-violence movement of the early seventies the opening gunfight was replaced by shots of Matt riding his horse. The series lasted an incredible 20 seasons! Dennis Weaver was Chester, Amanda Blake was Kitty Russell, Milburn Stone was Doc Adams. 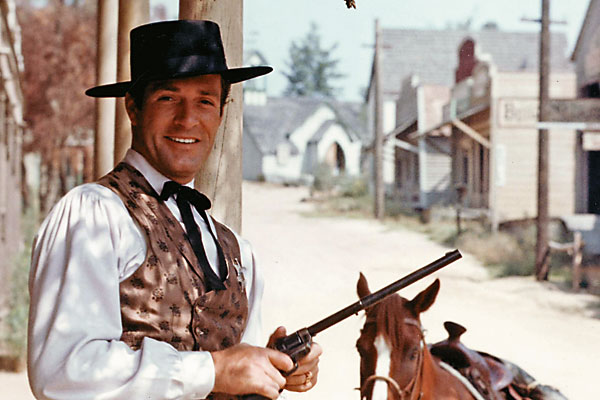 (1955-61). Hugh O’Brien won the lead here after George Montgomery turned it down due to other commitments. Like Gunsmoke this series was based in Dodge City, Kansas. O’Brien could draw and fire a six-gun in 0.8 of a second, making him the fastest draw in Hollywood. 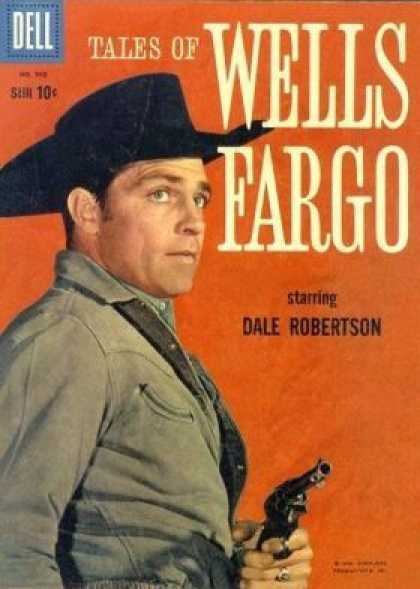 (1957-62). Starred Dale Robertson as Wells Fargo agent Jim Hardie. He rode his own horse (Jubilee), and taught himself to draw left-handed (he was a natural right-hander), just so his character would appear more distinctive. The locomotive used in the series was the same one in the Casey Jones series (1957).

(1958-63). Richard Boone starred as the gentleman gunslinger Paladin who hired himself out from his headquarters in the Carlton Hotel, San Francisco. He always carried a concealed derringer under his belt. Catchy theme song, ‘Have gun will travel’ reads the card of a man. A knight without armor in a savage land…’ 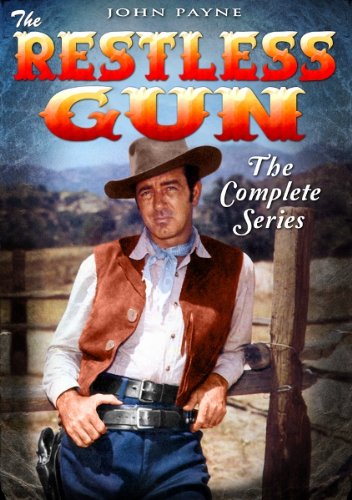 (1957-9). John Payne played Vint Bonner, a professional gunman, although not a sophisticated one like Paladin. He carried a barrel extension and a rifle stock for his hand gun. The series only lasted two seasons. 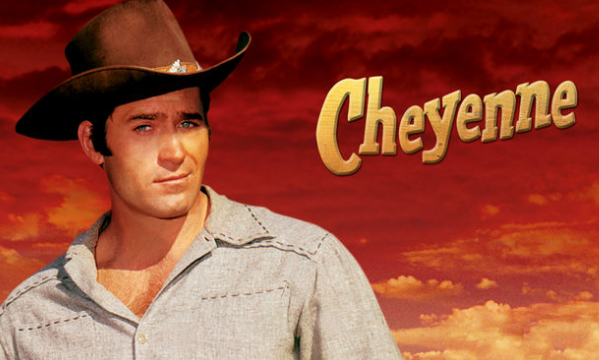 (1955-63). Former deputy-sheriff Clint Walker was the popular star of this series which ran longer than any of the Warner Bros. westerns. Contrary to popular opinion he did not remove his shirt in all 107 episodes – only in 25 of them.

(1956-61). Dick Powell hosted and sometimes starred in this series that initially tried to focus on the Zane Grey novels. However, before long they were discarded because their plots did not fit into half-hour episodes too well. 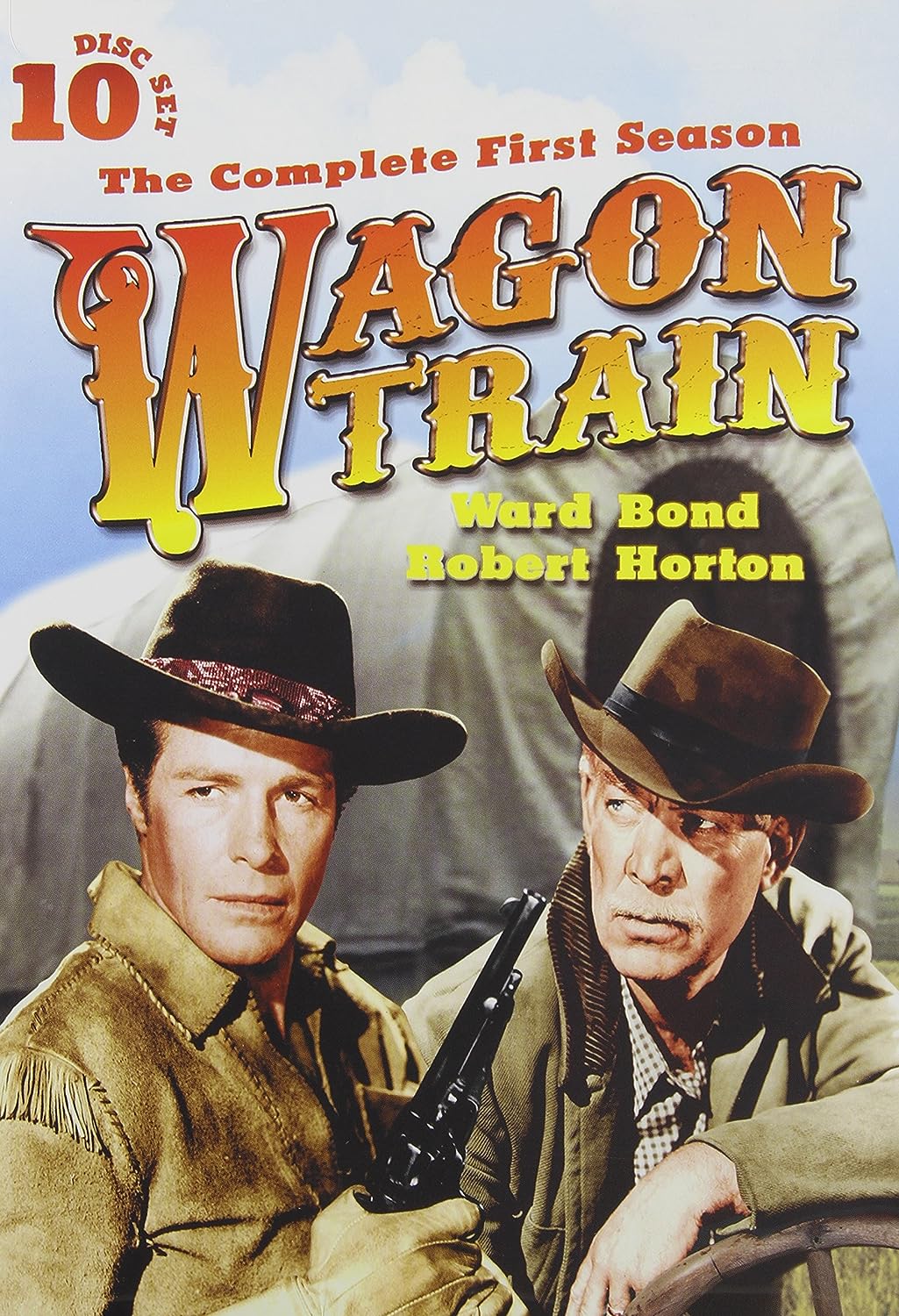 (1957-65). This enormously popular series originally starred Ward Bond as wagon master Seth Adams and Robert Horton as the scout Flint McCullough. The two actors did not get along. Bond’s drinking exacerbated a heart condition that killed him during the fourth season, causing his replacement by John McIntire. Horton, too, left the show and was replaced by Robert Fuller.

(1957-61). This rather lame series comprised one third of ‘The Cheyenne Show’. Cheyenne, Bronco and Sugarfoot would alternate in a tri-weekly cycle. Will Hutchins was the star. After the series folded he married and divorced Carol Burnett’s younger sister before turning his back on Hollywood to work in traveling circuses as a ringmaster and clown. (1957-9). Disney had three series running simultaneously in 1957 – The Mickey Mouse Club, Walt Disney’s Wonderful World of Color and this one that starred Guy Williams as Zorro. It was pulled in 1959 following a legal dispute between Disney and the ABC Network.

(1958-63). Chuck Connors was Lucas McCain, a rancher who was expert with an 1892 .44-40 Winchester rifle. Child actor Johnny Crawford played his son. The rifle was the same Winchester used by John Wayne in the 1939 film Stagecoach. 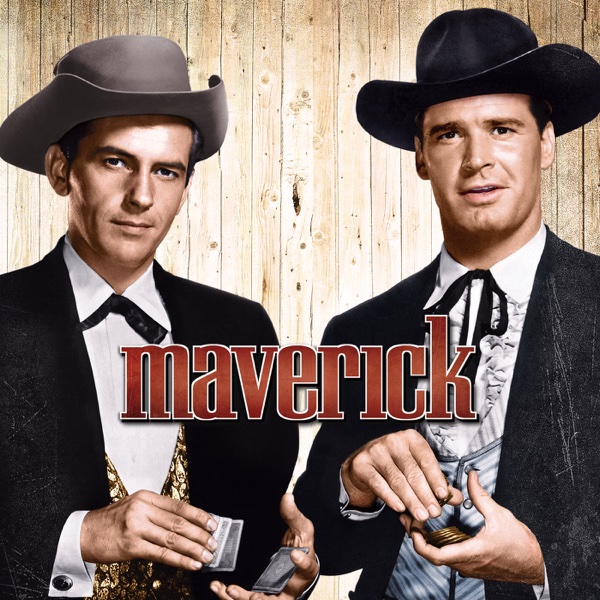 (1957-62). James Garner as Brett Maverick appeared in 60 episodes; Jack Kelly as Bart appeared in 83. In 1960 Garner left Warner Bros. and the series after winning a legal dispute against the studio. A writers’ strike had resulted in Garner being stood down without pay because (so Warners stated) there were no Maverick scripts available. His lawyer proved that Warners had over 100 scripts in their possession at the time. (1958-60). A reasonably popular series, The Texan only lasted 79 episodes and starred Rory Calhoun as Bill Longley, the fastest gun in the west. (1958-61). According to Niele Adams, Steve McQueen’s wife at that time, her husband faked a car accident while working on Wanted: Dead or Alive so that he could wrangle time off from the series to make The Magnificent Seven in 1960. As bounty hunter Josh Randall he starred in all 94 episodes. (1959-65). This was the series that starred the ill-fated Eric Fleming as trail boss Gil Favor, supported by the unknown Clint Eastwood as Rowdy Yates. Favor drowned making a picture in South America in 1966. Eastwood was 29 years old at the commencement of the series, yet his character Rowdy Yates was supposed to be just 19.

(1959-73). The second-longest running western series behind Gunsmoke, Bonanza was the only western TV series to have all its episodes filmed in color. The death of Dan Blocker (Hoss) in 1972 pretty much put paid to its incredibly successful run.

(1962-71). James Drury as ‘The Virginian’ and Doug McClure as Trampus appeared in 249 episodes each over the 9-year lifetime of this iconic series. Most unusually for television back then. Each episode ran (with commercials) for an hour and a half.

(1965-9). This unusual series featured Robert Conrad and Ross Martin as two agents of President Grant who ride throughout the American West on a specially appointed train fighting evil. A combination of western and science fiction, the series employed all kinds of devices and inventions (many of them decades ahead of their time) to thwart the bad guys. (1964-70). Fess Parker was Davy Crockett for Disney in the fifties, instantly recognized wherever he went. He was, therefore, made for the role of Daniel Boone. Interestingly, 17 year-old Veronica Cartwright was forced to leave the show after the producers wanted her to have more grown-up relationships as Daniel’s daughter Jemima. Patsy Blair, who played her mother, threatened to quit over the issue, concerned that this would make her look much older if the actress portraying her daughter was to be in romantic situations. Faced with an ultimatum the producers sacked Veronica.

(1972-5). David Carradine starred as Kwai Chang Caine, a Shaolin monk and Kung Fu expert who roams around the American West getting into all kinds of scrapes despite his peaceful, non-violent nature. Released at the time when the ‘anti-violence’ movement had considerable clout, the series enjoyed its brief moment or two in the sun before fading away.

(1974-83). The life and adventures of the Ingalls family in 19th century America. Michael Landon (Little Joe in Bonanza) played Charles Ingalls; Melissa Gilbert was his daughter Laura. She was 10 when the series began in 1974. A few years later, as she received her first screen kiss on the set, her real-life mother continually wailed, ‘My baby!’ and had to be consoled!

(1976-9). This was a mini-series spun-off from the 1962 movie of the same name. James Arness starred and Bruce Boxleitner co-starred.

Of course, there were many more western series that did not climb into the Top 30 at any time; Bronco, The Guns of Will Sonnett, Tombstone Territory, The Cisco Kid and The Rebel are just a few I can think of off-hand. Over the next week or so I shall present a similar examination of other TV series genres of the 1950-80 era – war, sitcoms, family shows, spies and secret agents shows, cop shows, sci-fi and so on. 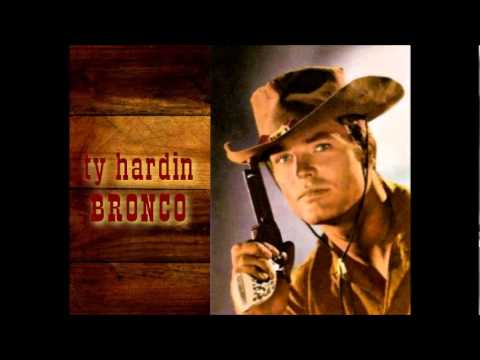 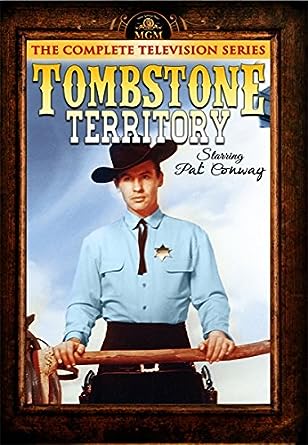