Whenever Don’t Look Now (1973) is mentioned, the talk, sooner or later, turns to the controversy surrounding the four minute sex scene between Donald Sutherland and Julie Christie. For some reason scores of commentators insist that the scene was not simulated, that the actors really had sex on the set. Despite strong denials from both actors the rumors persist although, frankly, they make no sense whatsoever. For the record, the scene shows no genitals of either actor, but does feature bare breasts and buttocks. So have 10,000 other films. When appearing on ‘Inside the Actors Studio’, Sutherland openly recounted what happened. Once he and Miss Christie had disrobed and got into bed, the director, Nic Roeg, began issuing what he clearly felt were the usual explicit instructions for such scenes, directions such as, ‘lick her nipples’, ‘put your hand between her legs’, ‘get on top’, and so on. It was all business as usual, according to the director. Just how many directors consider such implicit instruction is normal is debatable, of course. The stars actually met for the first time on the set of the picture, and Roeg ordered the first scene shot to be the sex scene. He wanted it out of the way as early as possible. Christie, in particular, was terrified. Even Sutherland was nervous. To suggest that two professional actors of standing would engage in actual sex on a mainstream movie is ridiculous. It is also insulting to them both. Perhaps, fellow actor Malcolm McDowell sums the rumors up as well as anyone. ‘It’s laughable. They were just two extremely gifted actors who made everybody believe they did and ran with it. There was no way there was penetration on the set. No way. Because that crosses over into a porno picture, and I don’t care which way you dress it up. We’re in the business of illusion. If you can’t think of any way of making that exciting, you’re in the wrong job.’

Most mistakes made in movies are the result of continuity mishaps. Scenes are shot so many times that little things such as the level of coffee in a cup, or the amount of ash on a cigarette, vary from one shot to the next. In the 1956 classic western The Searchers, however, there are four distinct and unusual errors that really should have been noticed and addressed before the picture went in the can. The first of these occurs when the posse come across the body of a Comanche buried under a flat rock. Watch closely as the slab is lifted away and you can clearly see the ‘dead’ man’s diaphragm moving up and down as he takes a couple of last minute gulps of air. The second error occurs almost immediately when Ward Bond’s character (the reverend) tosses his red sash into the man’s grave just before the slab is rolled back on top of him. The very next scene, however, shows the reverend riding along with his red sash tied around his waist. Another obvious error happens towards the end of the picture while John Wayne and Jeff Hunter (Ethan and Marty) are discussing what to do about Debbie, their kin stolen as a child by the Comanches and now secured in Chief Scar’s camp. In the distance, atop a dune, we can clearly see Natalie Wood’s head as she waits for the cue from her director to jump up and run down the dune to Ethan and Marty. The fourth (and worst) error occurs while the US Cavalry are crossing a frozen stream. In the background to the center right of the screen a car can be clearly seen driving along a road. The year is supposed to be circa 1868, so this is a pretty bad mistake. Having pointed these ‘glitches’ out, I must also add that The Searchers is by far my favorite western of all time. Easily. John Ford could have tossed in Sinatra belting out ‘New York, New York’ on a nearby mesa and my opinion would remain unchanged. McDowell in A Clockwork Orange 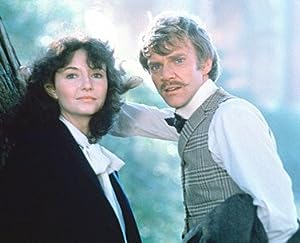 With his future wife Mary Steenburgen

in Time After Time

If any actor has experienced a roller-coaster ride throughout his acting career and, indeed, his life, it is Malcolm McDowell. Born in Leeds, England in 1943, he was packed off to boarding school at eleven, where his difficult manner saw him beaten every Monday morning. Later, he worked at his father’s hotel until the business went bankrupt due to his dad’s alcoholism. Malcolm’s first big screen role ended up on the cutting room floor, but his role as a rebellious student (hardly a stretch for him) in If…(1968) brought him instant stardom in Britain, although nowhere else. Three years later, however, the world stood up and took notice of his unforgettable portrayal of Alex DeLarge in Kubrick’s A Clockwork Orange. In 1975 he met and wed Keir Dullea’s ex-wife, Margot Bennett, but the union would not survive five years. In 1976 he became involved in the horrendous, semi-pornographic Caligula, a picture that was eventually released in 1979 to unanimous disapproval. That same year he made his first American movie, Time After Time, an interesting outing that resulted in him marrying his co-star Mary Steenburgen in 1980. Once again, however, McDowell seemed to shoot himself in the foot, this time via alcohol and a $1,000 a week cocaine habit that torpedoed both his marriage and his ability to garner any more A-class roles. It took until 1994 for him to be given another shot at the big time. In Star Trek: Generations he was cast as the killer of Captain James T. Kirk. He knew he had performed well because over-zealous ‘Trekkies’ sent him death threats! Since then his career has not taken another backward step. McDowell is today considered one of the finest actors in America. 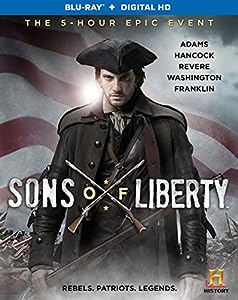 Shot entirely in Romania, the TV mini-series Sons of Liberty (2015) is a fine attempt to capture the story of the beginning of the American Revolution of 1776. A great deal of time, effort and money clearly went into creating authentic costumes and weaponry, as well as a wonderfully believable reconstruction of the town of Boston circa 1774. The actors chosen to play the principles are terrific, especially the always impressive Dean Norris as Ben Franklin (Norris played Hank in the superb Breaking Bad series), Ben Barnes as Sam Adams, Marton Csokas as General Gage and Rafe Spall as John Hancock. Surprisingly, Barnes and Spall who play two of the leaders of the Revolution, are both Englishmen, the latter being the eldest son of British actor Timothy Spall. Given the strenuous attention given to authenticity, it is a little disappointing to hear two expressions uttered that clearly did not fit the times. I refer to Franklin using the term ‘bat shit crazy’, a 1950s expression, and another player suggesting they may be going ‘a bridge too far’. Those words have been attributed to British Lieutenant-General Frederick Browning when discussing plans for the allied attempt in Arnhem in late 1944. Neither phrase had any right to be included in a movie about the American Revolution. There are also a couple of liberties taken with characters, in particular their ages. Revolutionary Sam Adams was 53 years old at the time of Lexington and Concord, yet he is played by a much younger Ben Barnes. Margaret Gage, wife of the British general, was forty years old with eleven children in 1774, yet she too is portrayed by an actress in her early twenties. A pity, for the series is otherwise well put together and worth seeing.