Even though he earned an architectural degree at Princeton and was very intelligent, Jimmy Stewart’s favourite method of relaxation on the set was to read Flash Gordon comic books. Away from the set he was, according to legend, considerably more active. His name has been linked, in fact, over the years before his marriage to no fewer than 263 of Hollywood’s glamour girls. How many of them were studio ordered publicity dates is anyone’s guess, but one thing is certain; women absolutely adored him.

In 1949 he married Gloria Hatrick, a union that would last until her death in 1994. Although the occasional source claims he had an affair with Grace Kelly during the shooting of Rear Window in 1953, most agree that this was probably not the case. Of all the Hollywood leading men from the old studio system days, very few remained faithful to their spouses for any length of time, but Jimmy Stewart, it is generally conceded, was one of those who did. Widely admired western star Joel McCrea was another.

During the McCarthy witch hunts of the late 40s and early 50s Stewart wholeheartedly supported endeavors to blacklist suspected communists. In fact, Michael Munn’s 2004 biography, Jimmy Stewart: the Truth Behind the Legend claims he worked undercover for J Edgar Hoover to expose his movie friends and acquaintances, even Cary Grant and Frank Capra. Gloria Stewart was quoted as saying: ‘Jim went barefoot up the mountain and saw the burning bush…only God’s name was J Edgar Hoover’. That statement probably says more about James Stewart than any other.

It was over this very issue that Jimmy’s lifelong pal Henry Fonda fell out with him in the early fifties. Fonda had joined Humphrey Bogart, Lauren Bacall, John Huston and others in signing a petition to the government, requesting that it end its despicable investigations into the movie industry. Stewart and Fonda disagreed heatedly and at length about this. It was years before they renewed their friendship and only then on condition that any mention of politics was strictly taboo. In 1970, when the Daily News asked Jimmy if he agreed with John Wayne that communists still posed a threat to America, he let the cat out of the bag when he answered: ‘I don’t think that there’s any question that the communists are behind a great deal of unrest in the United States. In addition, I feel they are still a potential danger in show business’. Some ideas, it seems, even bad ones, die hard.

In World War Two Jimmy served with distinction in the USAAF as a combat pilot over Europe, rising to the rank of colonel by war’s end. He was a self-confessed ‘hawk’ and decades later actively supported the Vietnam War and other right-wing issues. Two years before his retirement from the US Air Force Reserve (as a brigadier-general no less) he even gained permission to fly on a B-52 raid over North Vietnam as an observer.

When asked about teenagers who dodged the draft during the Vietnam War he was vitriolic in his reply: ‘I hate them! I absolutely hate them! Whether right or wrong, their country was at war, and their country asked them to serve, and they refused and ran away. Cowards, that’s what they were’. Their country asked them to serve? The draft doesn’t ask anyone. In 1969 his boy Ronald was killed in Vietnam while serving as an officer in the US Marine Corps. Jimmy, like many Americans who lost sons in that war, understandably could never allow himself to entertain even the possibility that his boy had died for a false cause.

A truly disturbing aspect of Stewart’s nature, however, was his apparent dislike of black people. This was not that uncommon in the Hollywood of his era. With the exception of Gregory Peck’s home (and a few others), it was possible to attend a hundred Beverly Hills parties in those days and never meet a single black person, not even an affluent one such as Sidney Poitier. Stewart preferred the status quo and any move to alter it, whether through championing co-existence, even feminism, caused him extreme concern.

In 1971 he shocked NBC by demanding that black actor Hal Williams be removed from his TV program The Jimmy Stewart Show. ‘Blacks are bossing white people all over the country’, raged Stewart to NBC producer Hal Kanter. ‘And now we’re going to have the same damn thing on prime time television? A black is going to be lecturing me with millions of people watching? No way. I get casting approval and Williams is out’. Back in 1961, while Jimmy was shooting The Man Who Shot Liberty Valence, rumors of him racially slurring fellow actor Woody Strode were smoothed over by director John Ford. Everybody assumed it was a storm in a teacup. Well, everybody but Woody, anyway. 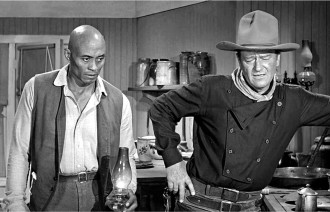 The Man Who Shot Liberty Valence

After 1978 Stewart suffered from health problems, including heart disease, skin cancer, deafness and senility. The death of his beloved Gloria in 1994 after 44 years of marriage affected him deeply. Like most of us he was far from perfect, but as a movie actor on the silver screen he gave enormous pleasure to a lot of people over a very long time. In July 1997 his health failed completely. ‘I am going to be with Gloria now’, were his last words.