Richard Harris’s violent temper and manic drinking bouts were legendary in Hollywood. In fact, it was generally accepted by most producers that the signing of the wild Irishman for any picture meant adding a further week onto the shooting schedule, simply to allow for days lost through his bingeing. Not that he was the worst offender in that regard. Richard Burton’s signing usually tacked three weeks onto a shooting schedule.

Once, after a day’s filming on the set of Hawaii in 1966, Harris raced out into the traffic opposite the studio and punched passing cars until his knuckles bled! His first wife, Elizabeth, was often the target for these violent outbursts. Towards the end of their brief marriage she feared him as his drinking and drug-taking reached epidemic proportions. His ghoulish sense of humor often hurt her and his friends as well. For example, he delighted in disguising his voice on the telephone and somberly informing loved ones in a most official manner that, ‘Mr Richard Harris, actor’, had just been killed in a particularly gruesome accident. Elizabeth ultimately called it a day and moved on. She entered into a relationship with Canadian actor Christopher Plummer, of The Sound of Music fame, before marrying another equally difficult actor in Rex Harrison. Harris and Julie Andrews could not stand one another when they co-starred in Hawaii. ‘I hated her’, he told his biographer. ‘She was condescending and mean… She would say something, all quiet and conspiratorial, to the director. And I would shout, ‘Did you say something, Jules?’ – which just pissed her off.’ As often happens in the movies, however, the script called them to be desperately in love. Who says acting is easy?

Not a happy set

It was on the set of Hawaii that Harris first heard of the upcoming musical Camelot and he became obsessed with playing the role of King Arthur in it. ‘The only hesitation for me was Julie Andrews, who’d played it with Burton on stage’, he said. ‘I thought, if it’s her, forget it. When I worked with Julie Andrews I think I experienced the greatest hate I ever had for any human being’. To her credit Julie would not be drawn into commenting on their relationship. As it happened, neither she nor Richard Burton ended up making Camelot anyway. Harris starred opposite Vanessa Redgrave in the thing and it laid a very big egg. One of his early acting jobs was in the London stage production of The Quare Fellow in 1956. The play’s director, the outlandish Joan Littlewood, immediately ordered the young actor to strip stark naked on the stage. He duly complied. ‘Now, make me believe you are fully dressed’, she said. ‘That’s what actors do. Until you’re prepared to expose yourself and vomit up your secrets on stage you’ll never be any good as an actor’.

Being naked never bothered him anyway. Tarzan the Ape Man (1981) was shot on location in Sri Lanka where the heat at times was quite unbearable. Harris played Bo Derek’s father in the movie and provided his own solution for the heat problem at a lunch buffet. He walked into the dining area naked from the waist down. ‘Excuse my balls’, he said, it’s just such a lovely day’.

International acclaim, fame, and far too much money suddenly arrived on his doorstep, and Harris could not handle the combination. He partied and womanized to his heart’s content, doing whatever he felt and whenever he felt like doing it. He owned a succession of chauffeur-driven Rolls-Royces, although few of his drivers lasted more than a month in his employ. Most could not handle being sprayed with obscenities first thing in the morning, and then being drunkenly kissed goodnight at the day’s end! He was a man of extremes.

After decades before the cameras he was finally rewarded with an Oscar nomination for his work in The Field (1990). ‘About fucking time’, he commented from his home in the Bahamas. When asked if he would be attending the ceremony, however, he made no bones about his feelings in that regard. ‘Why the fuck would I want to participate in any of this Hollywood bollocks?’ he exclaimed. Even so, he was particularly miffed when his performance was completely overlooked by the British Academy. Months later BAFTA asked him if he would care to deliver the opening address during a royal visit to America. He declined, saying he had a previous engagement watching television at home, and that they should instead ask the five men they had nominated ahead of him for Best Actor.

Harris in The Field

‘I don’t like actors’, he once told the Sunday Times. ‘Sean Connery is my only genuine friend, the only one I’ve asked to my home. I’d spend an evening with O’Toole, Roger Moore and maybe Richard Burton, but I can’t be bothered with the rest of them’. This dislike of actors, however, in no way inhibited his policy of bedding the female variety at every opportunity.

When the mood suddenly took him he would call a girlfriend in New York City from his London home at eight in the morning his time (it would be 3am in New York), and invite her to lunch at the Big Apple’s 21 Club. He would then jump on the Concorde at about 10.30 am London time, arrive at her apartment at around 9.30 in the morning her time, have sex with her, dine at ‘21’, dash back to her rooms for a little ‘afternoon delight’, and then catch the Concorde back to London in time for dinner!

He had a rather eccentric sense of humor, but none whatsoever when it came to politics. This became blatantly apparent when the Harrad’s bomb blast in 1983 very nearly terminated his career. Harris publicly supported the IRA who perpetrated the attack that killed six people, but quickly offered an apology (of sorts) for his comments when it became clear that his career was hanging by a thread.

In 1970, London’s Special Branch learned of a Loyalist plot to assassinate him. The Loyalist cell planned for a lone assassin to shoot him one evening as he returned to his Tower House home. Two other gunmen would wait down the street to finish the job should the first man bungle it. Special Branch placed the actor under surveillance for some time until the danger passed. It now seems the cell was tipped off by somebody ‘high up’, so they aborted the plot.

The day after he finished his scenes as Professor Dumbledore in the second Harry Potter film he was diagnosed with Hodgkin’s disease, a type of lymph cancer. His final months were spent in his six thousand pounds a week suite at the Savoy in London. Every once in a while he would pop into the hotel’s American Bar, drop to one knee and belt out a song or a piece of Shakespearean prose. The entire bar would come to a standstill until he was finished.

Eventually, Harris became so ill that he had to be transferred to a hospital. As he was wheeled through the lobby of the Savoy Hotel on an ambulance stretcher, the ever boisterous Irishman called to guests, ‘It was the food! Don’t touch the food!’ He died on 25 October 2002, the day of the movie’s press launch in London. Russell Crowe was making Master and Commander: Far Side of the World (indeed he actually was on the far side of the world) when he heard the news. He flew half way around the globe to attend his friend’s funeral. The two men had hit it off making Gladiator together in 2000. 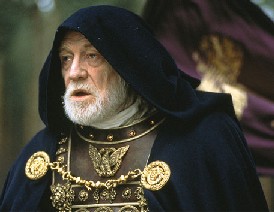 the emperor in Gladiator

Richard Harris was a hell-raiser, a womanizer, and he never suffered fools gladly. But he was one hell of an actor too, with a screen presence not unlike Lee Marvin’s. When either man came into shot, eyes were drawn to him as if by magic. Talents like theirs are rare. And they are missed.